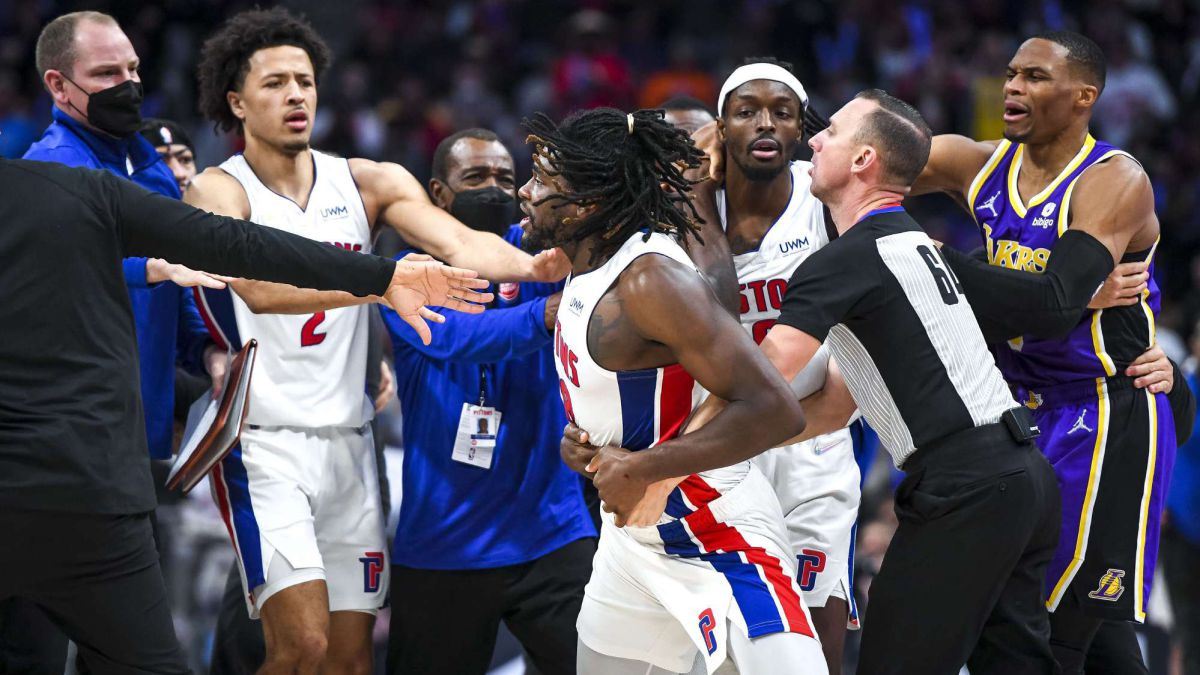 "He hits hard, that guy hits hard. We ended up with many injuries, with many scratches"Kelly Olynyk said after her first summer training camp with

“He hits hard, that guy hits hard. We ended up with many injuries, with many scratches”Kelly Olynyk said after her first summer training camp with the Detroit Pistons, her fourth NBA team. He talked about his fights in the zone, in every practice, with Isaiah Stewart, the 20-year-old center to whom Olynyk, a veteran who goes for the decade in the NBA, also predicted a bright future: “He is all the time asking questions, studying the game … he is a second-year boy who constantly asks himself You don’t have to go talk to him, he’s the one talking to you. ” “He is our anchor. He is physical, he is very good, he has very fast feet and very long arms. He is the defensive presence you need on the inside, our stronghold in the area. And if we talk about someone so young, the future that lies ahead. it’s excellent”. This is said by Saddiq Bey (22 years old), Stewart’s draft partner. He number 19, center 16. The two are part of the reconstruction that is already underway in MoTown: Detroit against the world. They are generation mates of Killian Hayes, chosen with the 7th pick in that 2020 draft and a point guard who is having a hard time getting started. All three preceded the jewel in the crown: Cade Cunningham, the big No. 1 from the last draft. A special boy called to do special things.

On the track, Stewart is a tireless motor player. Frantic, physical and tough. With instinct to defend. His intensity made him one of the most followed young men in the entire country when he went from high schools in New York to those in Indiana. And from there to the Washington Huskies, his choice over other larger universities (Duke, Kentucky, Michigan State …) for his relationship with coach Mike Hopkins. There he played with Jaden McDaniels, number 28 in his draft, a pick for which both seemed destined to come out much higher only a few months earlier. McDaniels, chosen by the Lakers and traded from LA to OKC and from there to Minnesota at top speed, was deemed a draft steal. And as such he is playing, with a huge defensive impact, for the Timberwolves. With Stewart there were doubts because of his meager 2.03. But what he lacks in height he makes up for in speed, sweat, and muscle.. Increasingly comfortable in a defense of more defensive changes and adjustments, he puts size where height does not reach. And he tries to progress in attack: his outside shooting, a key weapon to making him a complete player, has stalled in this second season. But near the rim, although he is small, he knows how to finish plays: this is how 88% of his shots arrive and he scores 61% of them. After entering the Second Rookie Quintet, he became an undisputed starter in this second year in Detroit. And he strides after a very bad start. Exactly the same as your team.

Stewart plays number 33 in tribute to Patrick Ewing, the legendary center of Jamaican origin who was more than one of the great emblems of the New York Knicks. His father, Dela, was in fact a Jamaican boy who dropped out of school to work as a fisherman before emigrating to the United States in search of a better life. First he was a farmer in Florida, finally a construction worker in Rochester, one of the most violent areas in the United States. There, on the tough side of New York, Stewart grew up idolizing the strong character and constant sacrifice of his father, who always appealed to the “Jamaican spirit.”

James Edwards, who covers the Pistons information for The Athletic, quoted his former College coach, Hopkins, to define the boy who has become the new heart of the Pistons: “I heard Will Smith say that the difference between him and anyone else is that he would die on a treadmill before letting the one next to him overtake him. That’s Isaiah. ” Edwards also says that the general manager of the Pistons, Troy Weaver, explained in this way in his circle of confidence why he was going to draft this center undersized (small for its position) with the number 16: “Sometimes this is about kicking everyone’s ass.”

As a rookie, in fact, Stewart has already run into several NBA heavyweights. One of them, the same LeBron with whom he has starred in the fight that is one of the stories of the first part of the season in the NBA. His obsession is not to give up an inch, to gain for energy what he could lose for height and talent. This is how he made a name for himself in basketball, sport to which he reached the age of 10 after playing soccer and practicing boxing. In the ring, Edwards also tells it, he was fearsome because at the age of 12 he was already 1.83 and had soaked up that culture of hard work and resistance that his father transmitted to him when he comes home limp and with boots full of cement. after handling hydraulic hammers. When Edwards asked if he was hurting the other boys, Stewart laughed: “I’d rather not talk about it …”.