Isco: “I want to show my football again” 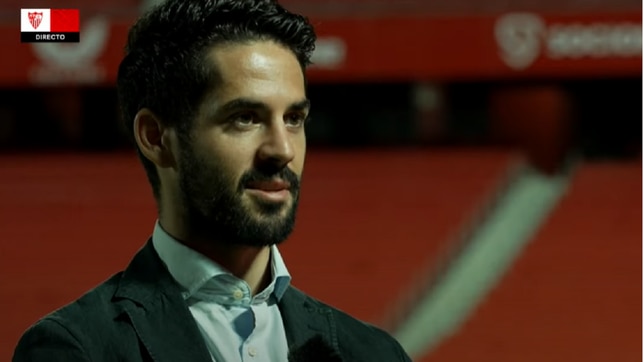 Isco is one of Sevilla's great signings for the new season. The former Real Madrid soccer player spoke to the official channels from Sánchez Pizju

Isco is one of Sevilla’s great signings for the new season. The former Real Madrid soccer player spoke to the official channels from Sánchez Pizjuán himself.

How are you?: “I am very excited about this new stage. I know where I’m coming from and hopefully we can do great things.”

First day as a Sevilla player: “I really want to start working with the team and meet my teammates as soon as possible. I want to be ready to help from the beginning in this start of the season.”

Illusion: “I really want to show the level I have and that I have never lost. I come to a team where I know the coach, the players and with a style of play that I love. Hopefully we can have a great year, win titles and keep all the fans happy”.

Weird summer: “It has been difficult, different. I think it is the first summer in which I have had too many vacations, but I have taken advantage of them to train well. I couldn’t wait to join this club.”

Doubts: “Nervousness always exists because it is your future that is at stake. Luckily everything is behind me and I’m here”.

Why Sevilla?: “I’ve had quite a few proposals, but on a sporting level, Sevilla was what interested me the most. A team that competes, that plays football well, that is in the Champions League… It is the best team to show my football again”.

Goal: “Compete and win titles. Sevilla has been achieving this for a long time and I want to help the club grow its history”.

Sánchez Pizjuán: “It has always been a difficult course. As far as I can remember I haven’t been whistled much, I hope not now either… It’s one of the courses you write down on the calendar because it’s very difficult to get points from here”.

Lopetegui: “He is a coach who has always trusted me. I like his football and what he proposes I think is the most suitable for my style. I have to thank him for the trust he has always given me, which has been maximum. Now it’s my turn to show him that he’s not wrong by trusting me”.

Position: “Wherever the coach says but always within the field.”

Competition: “That’s why I come here too, because there are high-quality players. The season is very long and I’m sure we’ll all play”.

Going to the World Cup: “Hopefully, it’s a goal that any player has but for that I have to perform well at Sevilla. I feel ready.”

What football games are there today, Saturday, September 17, 2022?
Barcelona – Seville, live
Dani Alves will not be able to fulfill his goal of being champion with Pumas
FOOTBALL 3670

Loading...
Newer Post
Oscar de la Hoya and the gold he dedicated to his mother in Barcelona 92
Older Post
Mexico prepares for the return of the NBA