ISDE promotes boxing in the municipality of Salvador Alvarado 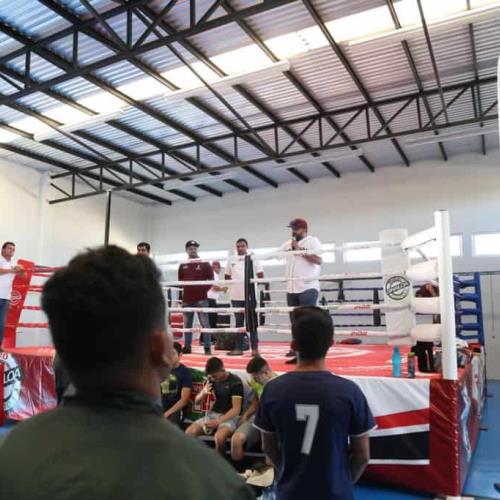 Launches the Sinaloense Institute of Physical Culture and Sport in coordination with the Sports Directorate of the municipality of Salvador Alvarado the Program “Coup to Vice”, which will seek to promote the boxing in the aforementioned municipality.

On behalf of the General Director of the Sinaloense Institute of Physical Culture and the Sport, Julio César Cascajares Ramírez; José Carlos López Tirado, Director of the Development of the Sportstressed that the objective is to promote the boxing in the community and keep young people away from vices and bad habits.

«On behalf of our ISDE Director (Julio Cascajares), and the Governor of Sinaloa, Rubén Rocha Moya, we bring the instruction to bring the sport to all of Sinaloa, for this reason, we bring quality sports equipment to Guamúchil, which will be used in the best way, “said López Tirado.

«They have first class facilities, give it a try, dream of being professionals and if you don’t succeed, dream of being good people, future teachers, lawyers, municipal presidents, or why not, sports director. Dream big, everything is possible and we hope, in the future, to see you in a professional role on television », he expressed.

Roberto Valenzuela Leal, Secretary of the City Council, was surprised by the facilities.

“The gym is enviable, we grew up here and I was shocked to see how it is right now,” Valenzuela Leal stressed.

«I want to recognize the disposition of Professor Adolfo Maldonado, not only in boxing, in women’s softball he was the pioneer in the community, and thanks to ISDE that is contributing to the cause, that they not only come to say nice words, they are contributing material sports equipment necessary for training,” he added.

At the end, sports equipment was delivered to the Municipal Committee of Boxing.

Two Argentine boxers look for their opportunity in Canada
Mafia, an unfulfilled promise and a brothel: the last days of “Ringo” Bonavena before falling into a trap and being killed
A spectacular end of the year is coming in boxing
BOXING 3110

Loading...
Newer Post
“Al-Khelaifi is a football nut, he helped a lot…”
Older Post
Boxing: Mike Tyson not to face charges after incident inside a plane