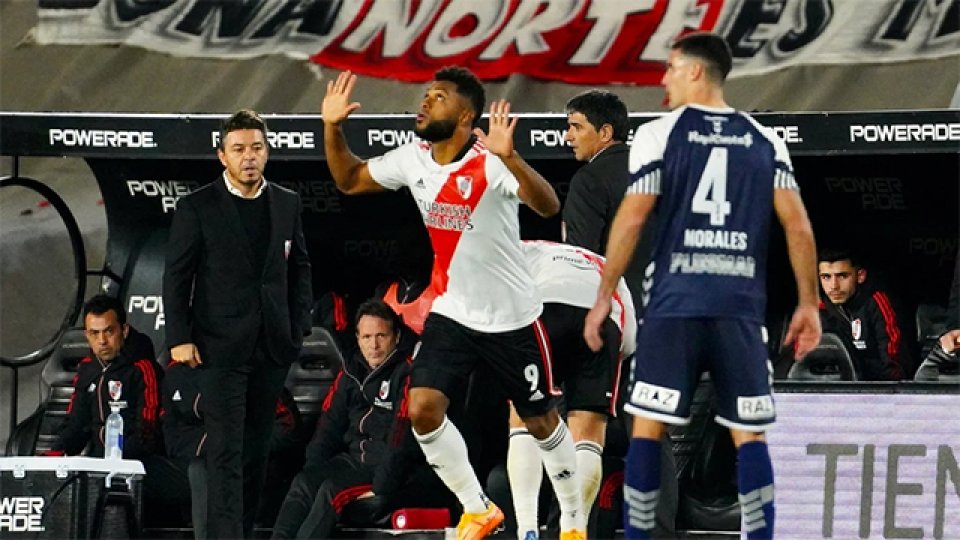 Before the coronavirus pandemic, the First Division tournament had 24 teams and featured 115 foreign-born players. It remains the highest average

This year it was again above 4 percentage points: 4.43% in the Cup that Boca won and 4.57% in the tournament that is currently being played. Although there are many players who have been living in the country for a long time, such as the Colombian Frank Fabra, who has not had a place since he obtained his Argentine citizenship, 25 foreigners arrived in the current market, mostly Colombians (8) who already they are installed as the most numerous legion behind the Uruguayans.

In addition, in this pass market, 7 Uruguayans and Paraguayans, an Italian of Argentine origin, an Ecuadorian and a Venezuelan were incorporated. Of all, the most resounding incorporation is that of the Colombian Miguel Angel Borja to River, after overcoming a hurdle for the transfer of money abroad, in addition to reviewing the player’s contract and agreeing on new conditions.

The Millionaire bought 100% percent of the pass for seven million dollars, plus a three-year contract. The 29-year-old player was seduced by the possibility of playing in the River jersey, the window to Europe or a more desirable market, the chance to play the Libertadores and be coached by Gallardo.

Ignacio Villarroel, second vice president of River, explained to Clarín that although the situation is difficult due to the dollar value, there are two factors that attract foreigners: “The competitiveness of the tournament, although today we are in a photo in which that prestige is can lose and you have to be awake to work and maintain it. And the other, what is Argentina, Buenos Aires, Córdoba, beautiful cities to live in and that, beyond the problems we have, are still attractive for a foreigner”.

“I’m happy, I’m grateful to God for the opportunity he’s given me. I think I’m coming to one of the biggest clubs on the continent for me. I’m coming to Real Madrid in America. I’m very happy about that,” the Colombian did not hesitate to affirm in his presentation.

The other strong incorporation was that of the Uruguayan Diego Godín to Vélez. The 36-year-old Uruguayan defender’s motivations are different. He needs to be fit and active ahead of the World Cup in Qatar. So, beyond economics, he was seduced by his good relationship with the Uruguayan coach Alexander Medina.

“When I took the step of coming from Europe to South America to play in Brazil, I opened my mind a little more. In this last month I received a call from Cacique Medina, with whom I have been friends for a long time, and I know how the who works, in the way they live matches and day to day, and it is a nice opportunity to come and do things well”, Godín explained when in his official presentation.

Operation these days is not easy. At the time of signing the contract, the negotiations between the parties try to be balanced. First, the value in dollars that the player wants to earn per month is set and then the final number is established, which can be the official dollar or an intermediate between the exchange rate gap.

“Sometimes you win or sometimes you lose, but you seek to agree on the most convenient”, a leader of a Buenos Aires club confided to Clarín, who is convinced that Argentine soccer continues to be a showcase for many foreigners. The fine numbers in the contracts are handled by the lawyers, so that everything is duly detailed.

Of the 128 players born in other lands, 41 are Uruguayan, 29 Colombian and Paraguayan, 4 Chilean and American, 3 Ecuadorian, Venezuelan, Mexican and Brazilian, 2 Bolivian, 2 Spanish, one Italian and one Swiss.

Of this universe, it is worth clarifying, there are eight who are the children of former soccer players and were born when their parents worked abroad: the brothers Alan and Joel Soñora, in the United States; Federico Redondo and Mateo Pellegrino, in Spain; Shayr Mohamed, Luca Martínez Dupuy and Pablo Bocco in Mexico; and Dylan Gissi in Switzerland. Two others, when their parents settled abroad: Lenny Lobato (Brazil) and Matteo Trombini (Italy). Except for the three Mexicans, they all did the inferiors in Argentine clubs and, therefore, they do not occupy a foreign quota.