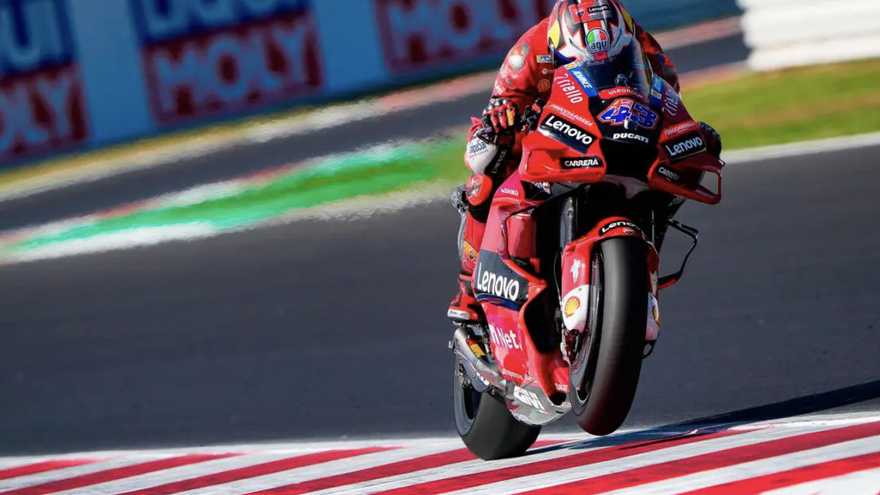 
The Australian, with his first Pole Position in four years, neutralized the rest of the Borgo Panigale mounts, who surpassed each other on many occasions

‘Pecco’ was second, but will start fifth due to yesterday’s penalty. Bad day for the other title contenders: Fabio 8th and Aleix 9th

Jack Miller becomes the eighth poleman of the course after getting a very close first place in the Marco Simoncelli track in San Marino. ‘Pecco’ was second, but will fall to fifth place, leaving his compatriots in the front row Enea Bastianini and Marco Bezzecchi.

Qualy of real madness in Misano with an infinity of changes in the leadership. Ducatist dominance once again: four in the Top4 and 6/6 Italian bikes in the first six places with the presence of Maverick Viñales among them. ‘Save’ the ‘Pecco’ furniture after the sanction received yesterday: it will also come out ahead of his greatest rivals, Fabio and Aleix.

Ducatista dominance in Q1 from start to finish at the expense of Marco Bezzecchi and Jorge Martín. The fall of Álex Márquez opened the session, which faded away with the arrival of the rain on the San Marino track. The jug of cold water went to Martín, who was left out after a great lap by Luca Marini that put both Mooney VR46 drivers in Q2.

Already in Q2, the water could have caused some damage, but the pilots came out cautious to discard the slicks and go back out on the track with dry tires. The first to open the way was Miguel Oliveiraalthough after him the rest of Ducati were encouraged, coming to alter the leadership more than ten times.

Loading...
Newer Post
Formula 1: Classification of the World Cup prior to the Italian Grand Prix
Older Post
The RFFM announces a National C futsal coach course in blended format with a start date of October 3