Jaime Echenique, the first Colombian in the NBA 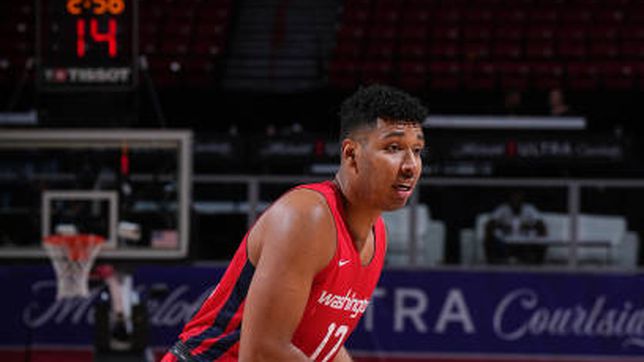 Jaime Echenique became the first Colombian basketball player to play in the NBA after his participation with the Washington Wizards in the 2021-22 season. The native of Barranquilla joined the team from the US capital through an Exhibit 10 contract.

The Colombian debuted in the last NBA season when the Wizards faced the Cleveland Cavaliers on December 30, 2021 at the Capital One Arena. The Barranquilla player played 3:04 minutes and did not record any statistics.

The 6-foot-1, 250-pound center was on the bench for Washington in subsequent games against the Chicago Bulls, Charlotte Hornets and Houston Rockets, but did not take the court due to the head coach’s decision.

Because of his potential, he spent most of the season with the Capital City Go-Go, Washington’s affiliate in the G League. His averages in the development league were 17.3 points, 10.2 rebounds, 1.3 assists, 0.9 blocked shots and 0.5 steals after playing an average of 27 minutes in the 28 games in which he saw action.

At the moment, the Wichita State product has no team and is a free agent. However, he was part of the Wizards team in the Summer League and participated in five games in which he generated 10.4 points and 6.4 rebounds in 18.8 minutes.

YOU MAY BE INTERESTED: Stephen Curry’s reaction to Ousmane Dembelé’s celebration

According to the projections made by Basketball Reference for the 2022-23 NBA season, Echenique will register 16.4 points, 6.6 rebounds, 3.7 assists for every 36 minutes played.

NBA: Giannis Antetokounmpo is already more than Kareem Abdul-Jabbar and claims his throne against Durant and Irving’s Nets
The team that will improve the most in the next season
NBA final stretch full of suspense
NBA 3184