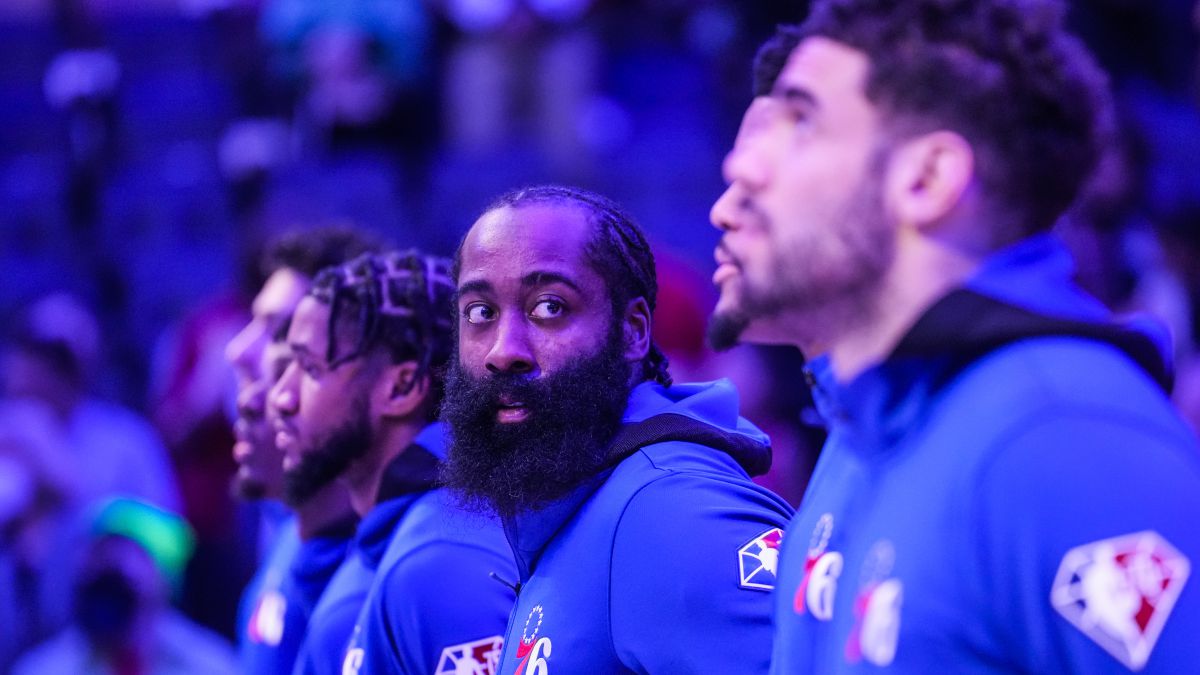 "Harden is going to have a hard time getting a former teammate to introduce him in his Hall of Fame induction.". They were the words of an anonymo

“Harden is going to have a hard time getting a former teammate to introduce him in his Hall of Fame induction.“. They were the words of an anonymous and retired NBA player before the shooting guard’s transfer to the Sixers became official. A phrase that perfectly defines another chapter in the career of a historic player who, however, leaves behind a mountain of corpses in the form of enemies (within the limits of the word) that he already accumulated when he remained faithful (within the limits of the NBA) to some colors, and that grows as the air changes. As if they were not few, and of enormous magnitude, those that he left in just under a decade in Houston; in case putting Kevin Durant and Kyrie Irving against him was not very daring. In case his umpteenth failure in the Sixers was something that could be done every day… Just in case, just in case…

Harden’s career it is what it iswithout conditioning neither butswithout the possibility of unnecessary elevation or, of course, exercises of undervaluation. Harden is, and always will bea legendary player, one of the greatest offensive talents of all time. And also is, and always will bea man who has fallen prey to his own shortcomings, who has never corrected what prevented him from advancing towards the rings and Olympus and who has had, it is obvious, a huge amount of egomania and narcissism that has ended up marking his career to unsuspected limits. The player who won the MVP in 2018, three consecutive Top Scorer titles and went on to average 36.1 points in a single season (the highest figure since Michael Jordan in 1986-87) is the same one who has signed and fired teammates at will, has been capricious and has been permanently opposed to assuming a different role the one he loved.

In an NBA in which everything is possible or, rather, almost nothing is impossibleHarden has broken barriers once unbeatable, has personified the most boring part of the current game (the one with the 3-pointers, the baskets in the zone and the eternal possessions) and has broken marks and records one day in and another too. He is an indivisible part of an era of evolution, not of involution; he is also the greatest rival of one of the greatest dynasties in history, those Warriors of the three rings and the five Finals. But it’s nothing morebecause his teams have reflected what he himself was, they have remained on the path that led to their definitive place in history and have fallen prey to their own mistakes. And all this without being able to beat the most important rival: themselves. Just like Harden, that he has always collided with limitations that he has self-imposed.

Harden has always been in the eye of the storm because of his habits, his poor work ethic, his constant visits to clubs striptease and a host of others manias (to call them in some way) that have been attributed. In 2012, after winning the Best Sixth Man award, he was used as a scapegoat for the Thunder’s loss in the Finals, in which he averaged 12.4 points (16.8 in regular season) and less than 38% in field goals (almost 50). In the Rockets, Harden emerged as the leader of a new project that also featured corpses that Harden faced to a greater or lesser extent: Jeremy Lin, Kevin McHale and Dwight Howard were the protagonists of the first phasesettled by a Conference finals in 2015 (4-1 against the Warriors, of course).

Before the second phase, it was obvious that the team needed something more to compete and Daryl Morey signed Mike D’Antoni, a man who always innovates, and that happened at the speed of Seven Seconds or Less to the slowness of the new system, which aimed to dethrone the Warriors: 55, 65 and 53 wins the following years, with a loss to the Spurs and, twice (and again) to the Warriors. Chris Paul arrived to perfectly adapt to the shooting guard, defend, play without the ball and demonstrate his immense quality and his propensity for injuries, in the fifth game of those Western finals that were the greatest opportunity for the Rockets since they had in their ranks that almost deity that Hakeem Olajuwon represented. However, there were no excuses: the Rockets managed, without Paul, differences of more than 20 points in the sixth game and, in the seventh, they missed 19 triples in a row to fail with that one immovable plan that ended up being their undoing.

Things did not change the following year, with a defeat, this time in the semifinals, after tying the tie at 2 and without an injured Kevin Durant. 4-2, goodbye to options and discussion behind the scenes with Chris Paul, who left at the request of a Harden who requested the arrival of Russell Westbrook, whom he wanted to evict a year later, after being eliminated in the Orlando bubble. Two consecutive betrayals of two players that he himself had requested. And, without that being enough, not happy with Westbrook’s departure, he asked for his own, which he forced ad nauseam and ended up getting more out of heaviness than out of the Rockets’ desire, now without D’Antoni, without Morey. and with a Stephen Silas who knew absolutely nothing about the subject nor had he spoken to a player who showed little or no loyalty to an entity that had given everything for him and today collects the crumbs of a failed project.

Embiid, from partner to victim

Harden came to a project that was created, within the parameters of the era of empowered players, Kevin Durant and Kyrie Irving. They were the ones who arrived, the ones who did not jump on the court in the first year (Kyrie 20 games and Durant none), they threw Kenny Atkinson behind the scenes and began to run everything as they pleased. To do what they could with Joseph Tsai, the owner, to choose Steve Nash to do rather little in a coaching position that they consider more of an obligation than a necessity and to be the referents of a project that he aimed (at the moment, not have won) the ring. Harden was a last minute guest. And the shooting guard soon assumed the role of point guard and assured that he would do everything to win. Until that all It has been too much for what I was willing to give.

Kyrie did not get vaccinated, Durant threw everything and, when he was injured, it was Harden who got it do guitar solos. The shooting guard, in a physical form that was far from what he was in his best years in the RocketsI noticed a lot back to back, he arrived at the last quarters tired, he was not comfortable having to pull the car alone, he did not agree with Kyrie’s decision not to get vaccinated and he was lost in a city where everyone is, New York. And in Philadelphia Morey threw him while in Brooklyn there was no longer D’Antoni, Nash’s assistant last year, when an extension in the seventh game of the Conference semifinals left Harden without a ring that he has never won. One of the (many) pending subjects for him. Wishes fulfilled, second forced transfer in a year and goodbye to the project of the big three. One that, despite everything, always had two stars and never had three. In the end, just 16 matches for the trio with a 13-3 record. An association so ephemeral that we cannot even ask ourselves that about what would have happened if…

And in a new place, identical results. A hopeful start (26.8 points, 7.5 rebounds and 12 assists in his first 4 games) to later sink to 19.7+7+10.1 and just 36% in field goals. In the playoffs, the former star has been less than 20 points per game and just 40% shooting. And she has attempted 13 field goals in the series against the Heat, with a slight but short-lived resurrection in the fourth round (31 + 7 + 9), but an embarrassing way to erase in the sixth and final: just 11 points, 9 shots attempted, only 2 in the second half and 0 points in the last 24 minutes of play. One more failure in a career full of ups and downs, with an enormous talent to do everything but also to suffer from a supine indolence that, once again, leaves him out of the fight for a ring that he does not seem to need. And that last, as a sensation, is the worst of all.

After the incontestable defeat and the image shown, the Sixers headed to the thinking corner. It is likely that Doc Rivers, Joel Embiid and James Harden will not get back together for the basketball course and that one of the three will fall, and the coach, who has run out of arguments since leaving the Celtics (his ring in 2008 is now far away) has an increasingly complicated position and does not seem to be happy with Daryl Morey’s decisions and how An Embiid with whom he was in full harmony has been surrounded. The coach has sounded for the Lakers, who could be waiting for their season to be resolved to interview him. And there is talk of Mike D’Antoni for the Sixerssomething with which Morey would fulfill a dream: to move everything he had in Houston to Philadelphia.

What the Sixers have is half worth to Morey beyond Embiid: Maxey mixes good streaks with constant rainfall, Niang is at half throttle, Milton does not score and Danny Green, always useful, has been injured in the first quarter of the sixth game. Harden, for his part, will earn 47 million dollars next season and expects a new millionaire renewal from Morey, who is 34 years old and far from his best level. And the leaks about the bad relationship with other teammates has already started. A very constant tonic, converted into tradition, for a man turned into a toxic product and that ends badly with one and the other in an indistinct way and for whatever reasons. They are all worth it.

James Harden reaches a key moment in his career. The money that he is going to collect already seems too much for a star that is beginning to lose light, and the hypothetical idea of ​​transferring what was in the Rockets to the Sixers is objectively absurd. The ring was not achieved with the best Harden of all time, it is not going to be achieved now with a 34-year-old, in the doldrums, who continues with the same extra-sports dynamics of yesteryear and who creates a controversial and toxic environment wherever he goes. The reflection is already late for a player who neither has a ring nor seems to want to get it. And the transfer that seemed like it was going to change the NBA has ended up being the mistake coming from Daryl Morey’s likes and dislikes. James Harden, intimate enemy, has no excuse at this point. They are finished. And what is more difficult for those players who have been everything, but have had a constant mass contrary to his person: redemption.

Loading...
Newer Post
‘Canelo’ and his “betrayal” of Chivas; the ‘Rebao’ shows his disappointment against the boxer
Older Post
Golf Tournament with Cause in Puebla: 4 minors will benefit