Jaylen Brown and Domantas Sabonis, in Malaga with the NBPA The sports facilities of the Training Center Higuerón (The Embassy) in Fuengirola (Málaga) host the sports-cultural program The Sanctuary, an initi

The sports facilities of the Training Center Higuerón (The Embassy) in Fuengirola (Málaga) host the sports-cultural program The Sanctuary, an initiative in which an expedition of the National Basketball Players Association (NBPA) in collaboration with the Junta de Andalucía, made up of players and executive staff, will develop training sessions and educational and cultural actions with the aim of generating synergies and consolidating Andalusia as the headquarters of the NBPA outside the United States.

This afternoon the presentation of the event took place at the Training Center Higuerón, which was attended by the Secretary General for Sport of the Junta de Andalucía, José María Arrabal, the head of international relations and marketing of the NBPA, Matteo Zuretti , the former player and director of the program, Berni Rodríguez, among other authorities, according to the Board in a statement, where he added that among the most prominent players present at The Sanctuary, Jaylen Brown and Domantas Sabonis stand out, as well as the Argentine Leandro Bolmaro. 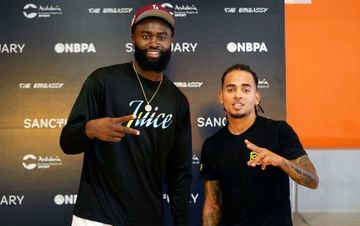 Jaylen Brown (Boston Celtics) with singer Ozuna at The Sanctuary, in Higuerón.MARIAN WELL

In addition to the specific training sessions so that the players do not lose their rhythm during the vacation period, the Board has explained that cultural visits and leisure activities will be carried out during their stay so that the NBPA expedition knows first-hand the “ great tourist potential” of Andalusia, “with the consequent repercussion and promotion that this entails”.

José María Arrabal has highlighted what this program can mean because “we want the Community to become a preferred destination for NBPA players, to make them feel at home and to help us promote basketball in our land”.

“We are managing to turn Andalusia into the home of sport, all sporting institutions and events want to come to our land, because they know the possibilities we offer, in terms of climate, facilities and organizational capacity, and that is a safe value”, has reported.

Last April, the Junta de Andalucía signed a protocol of intent with the NBPA, as a collaborator in the event, with the firm will of both parties to help promote basketball in Andalusia.

NBA player fined for touching a referee | Basketball
NBA: Stephen Curry and his most incredible shooting display Is it an alien?
NBA: LeBron James stays at zero: he does not receive a single vote from NBA officials to be the MVP of the season
NBA 3183