Joe Pyfer hopes to build on his UFC career 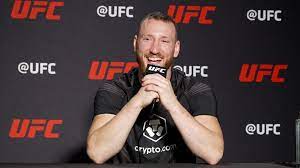 Making his promotional debut on Saturday at UFC Fight Night 210Joe Pyfer demolished Alen Amedovski with a vicious right hand to win via TKO at the 3:55 mark of Round 1. It was an official first impression for Pyfer, who was then happy, smiling, and glad that he hadn’t been harmed.

“It was as we thought it would be. Nothing surprises me. I am very well prepared with my team and my training.”

Pyfer earned a UFC contract on July 26 at Dana White’s Contender Series 47 after winning his fight via second-round TKO. He was the only contract winner in what was a lackluster start to season 6, in which UFC president Dana White told future hopefuls to “be Joe Pyfer.”

After finishing off Amedovski on Saturday, Pyfer asked UFC programmer Sean Shelby if he could have a minute to talk to White, because he had something important to say.

“I told (Shelby) that I need to talk to him, because I need to thank him, because he gave me a home for a year. He gave me money on the Contender side. And really, that made sure that I could have a place to live next year, at Dana’s house. I think the guy gets a lot of shit for not being a good guy or, you know, whatever nonsense people say sometimes. I don’t know any of the other stories, but as far as how he has treated me, he has treated me with grace.”

“He is my boss, and I want to like him, I want to respect him, and I have all the respect in the world for him. So it means something to me to go shake hands with my boss after going to work for him.”

The sentiment is understandable. After all, White gave Pyfer a second shot at the Contender Series after he suffered a serious elbow injury in his first appearance in August 2020. His His comeback story and his favorable standing with White put Pyfer in the spotlight before Saturday because of his approach to life in general.

UFC: Yair Rodriguez on Max Holloway: “He’s one of the best in MMA history”
MMA fans take their heads with one of the most violent KO’s of the whole year
Ignacio Capella or the ambition to win in the UFC
UFC/MMA 1198

Loading...
Newer Post
MotoGP lives its tightest ending since 2017
Older Post
IU and Podemos ask to review the golf course file together with Medina Azahara whose license they believe is “fraudulent”