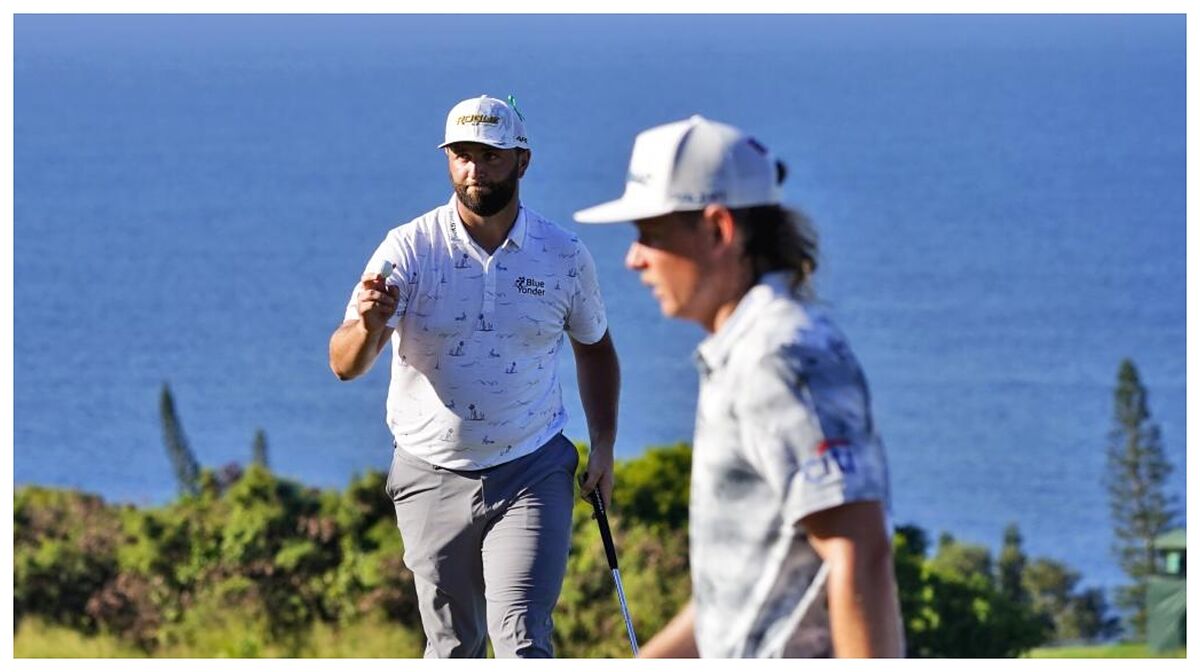 Updated 01/09/2022 - 06:01 With a rare display For a player who had not competed for two months, Jon Rahm stormed the leadership of the Sentry To

With a rare display For a player who had not competed for two months, Jon Rahm stormed the leadership of the Sentry Tournament of Champions, the tournament that opens in 2022 on the PGA Tour in Hawaii. Barrika’s signed 61 strokes, a score that equaled the record of The Plantation field in Kapalua that Justin Thomas had set just an hour earlier, the first to reach 12 under par on a sunny and pleasant Saturday where it was played at 67.1. average strokes, the lowest in tournament history. Only Branden Grace (74) played over par.

Both annihilated the brand that since 2003 has given in Maui when KJ Choi taped it with 63 hits. In addition, Jon equals the best card of his career, although in Mexico in 2020 he did it on a par 72 round, and together with Cameron Smith he imitates the tournament record after 54 holes (26 under par) that Ernie Els has held since 2003. Los Jon&#8217;s 193 strokes lower his personal best by 4 in three rounds since last year&#8217;s Fede St. Jude when he tied for the lead with Smith, precisely, and Finau, who ended up winning in a tiebreaker.

&#8220;It was a fun battle,&#8221; Jon intoned with a satisfied worker&#8217;s smile.. The world number 1 again deployed the teacher with all the clubs in the bag. He did not reach the perfection of Friday &#8211; this time he reached 80 percent of the fairways and missed two greens &#8211; but from the first moment it was seen that he had already picked up the speed of the greens. It only took two holes to make the first putt from 5 meters, the distance that ignites the wrist.

To the only bogey of the whole week, the 4, after a lost ball that made him play that par 4 in three strokes-plus the two added-, quickly mitigated with a hit in the first par 5 in the next section, came the anthology.

He played the final 12 holes at 38 strokes, at 11 under par, with nine birdies and one eagle, with an exquisite game, with irons as formidable as the 8, a par 3, which landed him at one meter or the eagle on the 15th hole, playing a brave 5 iron from 220 yards. With putts as powerful as that of 17, which from 10 meters went to die in the hole to the euphoria of his enthusiasts. &#8220;What did you think?&#8221;, I joked with Smith, with whom he shared a game and who had left with three strokes of advantage.

At his side, uploaded &#8220;to the train of birdies&#8221;, as Rahm defined the match, the Australian was not a spectator. Firm 64 strokes without errors or eagles. He joined the pulse on those twelve holes that he played at eight under par. They opened a sensitive distance with the third, five shots to Daniel Berger, which gives them air to pose a face-to-face for the title on Sunday with the option of assaulting the record of shots under par in the history of the PGA Tour that Steve Stricker has. at 33 under par since 2009 on the Bob Hope. They need a 66 to tie it.

In addition to the strength of the Spanish game, What does seem more assured is the permanence at the forefront of the world ranking. With Collin Morikawa the difference has shot up to 12 strokes. &#8220;The strategy for Sunday will be the same. Take fairways to have good shots to the green and make opportunities for myself. It is clear that it is a feasible course to score, which may allow someone else to come from behind, but you have to play very hard. well and put them in, &#8220;he summarized as a road book for the attempted assault on his seventh title on the PGA Tour and the fifteenth of his career.