Jon Rahm reveals the day he played golf against Rafa Nadal … and lost! 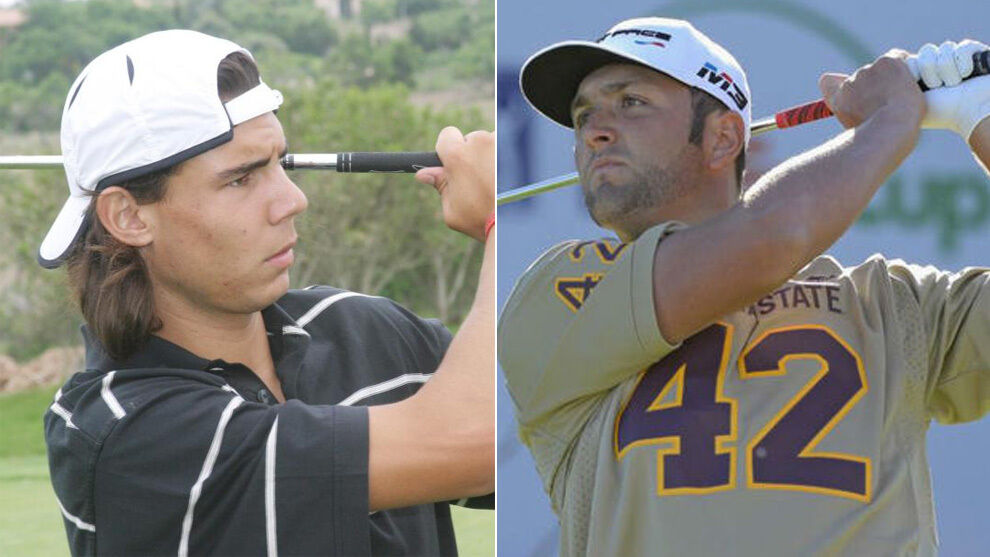 ANDGolf is a great link between two of the great stars of Spanish sport: Jon Rahm and Rafa Nadal. The first, number one and current world reference

ANDGolf is a great link between two of the great stars of Spanish sport: Jon Rahm and Rafa Nadal. The first, number one and current world reference and the second, tennis legend, but with a golf level at the height of professionalism.

Rahm has uncovered in his blog of the Basque Golf Federation and &#8216;Ten Golf&#8217; his particular and unknown game of golf with the Balearic when the Barrika player was an unknown second-year college student at Arizona State.

This meeting occurred at Larry Ellison&#8217;s private club in Palm Springs called Porcupine Creek. &#8220;Rafa and I and nobody else played, at least that&#8217;s what I remember, I don&#8217;t know if there was someone else, but as if to remember it, I was playing with Rafa Nadal, one of my great idols.. To give you an idea, at that time the only book that I had read in its entirety in my life was his biography, so imagine, I was excited, saying buah, I&#8217;m going to play with Rafa, lots of questions, what am I going to learn? &#8230; But that was quite different, &#8220;says Rahm.

I hit him eight shots and on the 13th tee he was four under par on the course and I was one less. I remember very well. I was thinking inside, but what a joke is this

At that time, the current winner of the US Open of golf was a promising youngster and Nadal was already a tennis giant, which explains the tennis player&#8217;s behavior. &#8220;I found a Rafa Nadal in competition mode. In 18 holes he spoke to me the least. He wanted to win and period. And he beat me. I hit him eight shots and on the 13th tee he was four under par on the course and I was one less. I remember it very well. I was thinking inside, but what a joke is this?. And watch out, playing from the same tee. It was my second year of university and he hits him very hard, he plays very well and, above all, he is a great competitor, which is important. I tried to talk to him, ask him about the book and he &#8230; nothing, with the utmost determination, thinking only of winning. It was curious and interesting. &#8220;

Rahm also details his feelings in a match against which he was one of his idols. &#8220;Honestly, I would love to have the opportunity to spend a little more time with him, now that I am a higher level athlete, to learn more about him and enjoy the day more &#8230; I am very clear about what I have to do the next time we can play. I will go to win from the beginning. But really, you have to put yourself in a situation, I was quite welcome &#8230;, super impressed, playing with Rafa. It&#8217;s Rafa Nadal! Anyway, let&#8217;s see if we can find a place to play a rematch. &#8221;

Tags: Golf, sports Center
Salinas Golf and Tennis residential complex: exclusivity and innovation
La Sella Golf reopens its 27 holes after the agronomic reform of the Mestral course
NBA: Michael Jordan wants to be Jon Rahm: “I would love to have his game”
GOLF 136