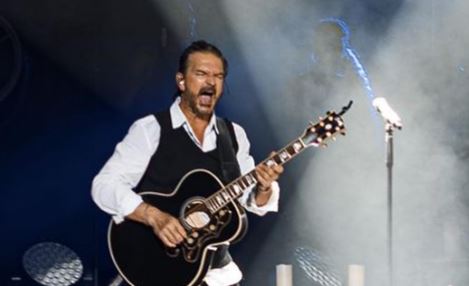 Ricardo Arjona will arrive in the country with his "Black and White" tour. Photo: social networks From 10:00 this Thursday, April

Ricardo Arjona will arrive in the country with his “Black and White” tour. Photo: social networks

From 10:00 this Thursday, April 21, 2022, the tickets for the concert Ricardo Arjona. The artist will have presentations in Quito and Guayaquil.

In social networks the fans they spoke about their experiences to get the tickets. Some published their happiness for having achieved them and others denounced a mismanagement of ticket sales at physical points. There are those who even talked about problems on the website.

who already bought them

On Twitter Roxana López published: “Nothing happier than having my tickets to see you Ricardo Arjonaafter 8 years I will see you again”.

Nara happier than having my tickets to see you @Ricardo Arjona , after 8 years I will see you again. ♥️

Lalita Intriago shared her happiness in this way: “I already bought the tickets, I will go with my daughter who loves you so much, see you in October Ricardo Arjona.”

“Happiness is in simple things, like having front row tickets at Ricardo ArjonaMichelle Pamela tweeted.

Happiness is in simple things, like having front row tickets at Ricardo Arjona ♥️

Other fans did not have the same luck as the aforementioned netizens. There were those who did not accept the credit cardwho had problems with the page and in the face-to-face line.

“I was shopping with my Pacificard and they took me out of the line. My card is not accepted,” lamented Kanea González.

“It doesn’t let me buy with any card, I couldn’t buy tickets to see my favorite singer,” posted an Internet user on Twitter.

“I’m trying to buy tickets for Arjona and he rejected the card and my friend is crying,” said another user.

Another follower was more energetic: “Your organization is very bad.at the point of the Scala shopping at 10:00 where the sale should have started, they came out saying that they had not prepared the stand and that they did not have Internet”.

Ricardo Arjona, Guatemalan singer-songwriterarrives in the country with his black and white tour” that will present it in Quito (September 30th) in the Atahualpa Olympic Stadium, and in Guayaquil (October 1st) at the Albert Spencer Stadium.

“’Black and White’ appears as the most daring bet of the artist defending two of the best albums of his career recorded at the emblematic Abbey Road studios in London, ”says a Feel The Club statement.

when tickets go on sale, how and where to buy them
The second phase of ticket sales begins until April 28 | Sports | America Edition
Check here the ticket prices for Toluca vs. Rayados
TICKETS 283