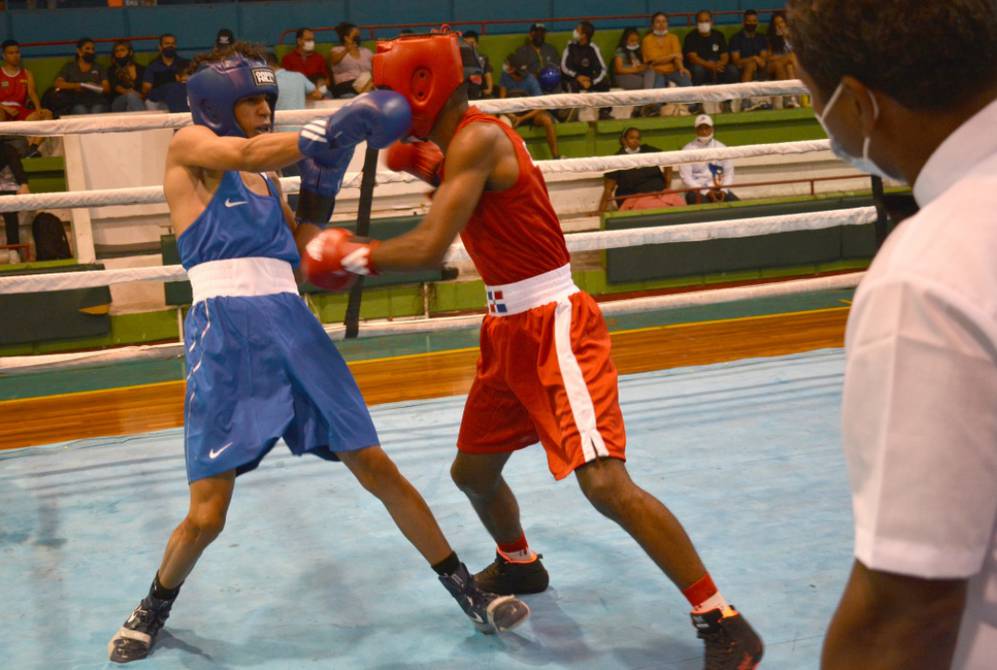 Tournament, which was previously held in Guayaquil, is held in the California complex of the Manabí Sports Federation, in Portoviejo.The second dat

Tournament, which was previously held in Guayaquil, is held in the California complex of the Manabí Sports Federation, in Portoviejo.

The second date of the XI Gold Belt Boxing Cup was completed, in the junior and youth categories, for women and men, in the main arena of the California sports complex of the Manabí Sports Federation, in Portoviejo.

The opening ceremony was attended by authorities such as Leonardo Orlando, prefect of Manabí, and Danilo Carrera, former president of the Ecuadorian Olympic Committee (COE) and head of the Ecuadorian Tennis Federation.

As detailed by Álex González, president of the Ecuadorian Boxing Federation, recognized by international organizations and not by the COE or the Ministry of Sports, the competition brings together a hundred fighters from Bolivia, Chile, Guatemala, the Dominican Republic, and Puerto Rico and Ecuador, which assists with boxers from ten provinces.

Before starting the fights, awards were given to Orlando, González and Guillermo Villagómez, member of the board of directors of La Ecuatoriana de boxing, for their support and work for the benefit of Ecuadorian boxing.

Among the results of the junior category, 48 kilogram division, Alan Dumaceta, from Ecuador C, lost 0-5 to Juanma López, boxer from Puerto Rico; while Luis Castillo, from Ecuador B, defeated Marlon Alvarado, from Ecuador A, 5-0; and then Castillo fell 1-4 to Anthony Pupiales of Ecuador D.

In this category and division but in ladies, Talisha Andy, from Ecuador A, won 4-1 over Michaelys Ramírez, from Puerto Rico.

Orlando Yankur, from Ecuador D, achieved a 3-2 victory over Jhon Correa, from Ecuador C, in the 54 kilogram division; while José de los Santos, from the Dominican Republic, won a 5-0 victory against Allen Morales, from Puerto Rico; and Jair Erazo of Ecuador B defeated Kevin Govea of ​​Ecuador A 5-0. De los Santos was then eliminated by Jair Erazo of Ecuador E, who beat him in a split decision 2-3.

Puerto Rican Carlos de León went to the second phase of the tournament by beating Juan Palacios, from Ecuador A, 5-0, in the 60-kilo division; Kevin Cajilema, from Ecuador C fell 0-5 with Johnny Córdoba, from Ecuador A, who on the first day had eliminated Elkin Zambrano, from Manabí, whom he had beaten 5-0.

Fighter Arelis Espinoza, from Ecuador A, had the first win by referee suspends combat (RSC) by showing superiority in the 2nd round against Glenda Guasapud, from Ecuador C, in the 54 kilogram division.

Joseph Pin, from Manabí A, received the RSC as protection in his fight against Anderson Yumbo, from Ecuador A, who was superior in the third round of 57 kilograms; while Emilio Guzmán, from Chile, beat Tito Macías, from Ecuador B.

The results in the 71 kg division were: Byron Pineda, from Ecuador B, won by no-show from Josan Ochoa, from Ecuador E; Andy Arteaga, from Bolivia, 4, beat Gary Oyola, from Ecuador D, 1; Ángel Llanos, from Puerto Rico, won by RSC, in the first round, Jonathan Cruz, from Ecuador C.

51 kg: Daniel Mijango, from Guatemala, 5-0 to Érick Guerrero, from Ecuador B.

70 kg: Kerly Delgado, from Ecuador A, 5-0 to Jilary Carrera, from the Dominican Republic.

71 kilos: Byron Pineda, from Ecuador B, triumphed by RSC in the third round against Anthony Vivero, from Ecuador A; Ángel Llanos, from Puerto Rico, 5-0 to Andy Arteaga, from Bolivia.

75 kg: Felix Nivas, from Puerto Rico, won the absence of Ángel Zambrano, from Manabí A; Jean Pierre Hurtado, from Ecuador A, 5-0 to Dharren Bisarroso, from Chile.

86 kilos: Wyaltt Trujillo, from Guatemala, 3-2 to Osvaldo Heredia, from Ecuador B. (D)

Loading...
Newer Post
NBA: On the horizon a possible All Star Game between the NBA and the Rest of the World
Older Post
Canelo Alvarez vs. Andre Ward would be a mega business for both fighters