Kamaru Usman’s representative on Canelo: “His mystique is gone” 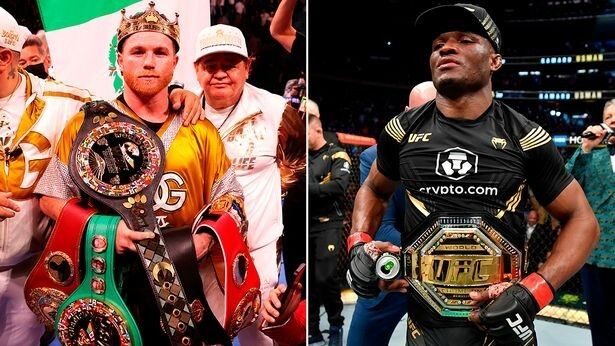 PIt's no secret to anyone Kamaru Usmanincluding his representative, have a strong sports rivalry against Canelo Alvarezand now Ali Abdelaziz assure

PIt’s no secret to anyone Kamaru Usmanincluding his representative, have a strong sports rivalry against Canelo Alvarezand now Ali Abdelaziz assured that the Mexican boxer has already lost his mystique after losing to Bivol.

“I don’t think he’s the pound-for-pound king any more.“, Abdelaziz pointed out in an interview with the YouTube channel, Menace Tube. “Canelo, your mystique is gone. Canelo Alvarez has become a regular fighter. He became one more.”

“Kamaru has enough balls to go to boxing, but we all know that Canelo will never have enough balls to come to mixed martial arts.“, Ali Abdelaziz affirmed about Canelo lvarez facing Usman, at least within an MMA octagon.

Usman is backed by Sonnen to fight Canelo

Kamaru Usman was supported by UFC legend Chael Sonnen to cause trouble for Canelo Alvarez in a crossover boxing match.

the weight champion UFC welterweight has long been looking for a fight with Alvarez, the great pound-for-pound boxer, but has failed to gain ground among fans of either sport due to the perception that it is a huge mismatch. Usman doesn’t have the same star power and aura that he had. Conor McGregor when he fought Floyd Mayweather in 2017and he’s had so much trouble selling the potential fight.

But Sonnen believes that if he could make the fight happen, he could cause Alvarez some major problems. even in a boxing ring. Speaking on his YouTube channel, Sonnen recounted an experience of doing a drill with the Nigerian while commenting on a recent event that changed his mind about the contest.

“Henry Cejudo was with me, Henry and I were trying to learn this technique from Usman,” Sonne said. “Usman moves my hand out of the way, speeding right into my jaw, he parries his blow. He parries him. It’s incredible control, to the point that I’m talking about, he made contact and was able to stop it right at my whiskersthat’s a different level of athletics, it was so impressive that I had to watch it one more time.

Tags: Canelo Alvarez - USA Latino, boxing
One of his records at risk: the boxer who could bring Floyd Mayweather back
Saturday’s boxing evening at Chana will have nine fights
The Indes came out against the complaints of sexual harassment in the Boxing Federation, which affirms that the facts are not true
BOXING 3212

Loading...
Newer Post
The weigh-in was done and everything was ready for the festival of the Rawson Boxing Club
Older Post
Manchester City and PSG, two clubs that put world football in check