This Wednesday, one of the figures of La Roja Femenina, Karen Araya, was made official around the new soccer destination t

This Wednesday, one of the figures of La Roja Femenina, Karen Araya, was made official around the new soccer destination that will have at 31 years old.

Through their social networks, Madrid CFF (Madrid Women’s Football Club) made the arrival official of the midfielder from Sevilla.

his past in Santiago Morning explains Karen Araya’s next sporting step, since It was the express request of the Madrid CFF coach, María Pry, who directed her in Chilean football. Her integration into the club will take place once she finishes her participation with Chile in the Copa América Femenina.

Audax Italiano’s proposal to change the coat of arms unworthy of Los Tenores: “It’s not understanding anything, it’s outrageous” 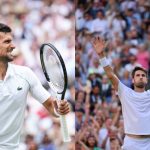 The present of Madrid CFF

It is worth noting that this team It has no connection with Real Madrid, which has its own club at the women’s level. In fact, both star in one of the derbys in the city.

Karen Araya will seek to contribute to a better collective performance of the team, which in the last season they finished in 13th place among 16 teams.

It will be the midfielder’s third experience outside the country, since she already played for the Gremio Osasco Audax in Brazil in 2018 and for Sevilla in Spain, club in which she was one of the team’s highlights until this offer arrived from the capital of Spain.