King Picasso, the boxer who wants to win a Nobel Prize and help other athletes 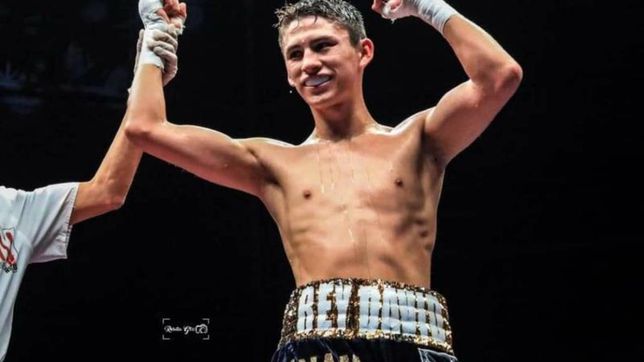 Alan David Picasso came to break the stereotype of the Mexican boxer, the one that classifies boxers as people far from the studios and surviving b

Alan David Picasso came to break the stereotype of the Mexican boxer, the one that classifies boxers as people far from the studios and surviving by force of their blows nothing more.

Perhaps for this reason, at 22 years old, Rey David, as they call him, is considered one of the greatest promises that Mexican boxing has today.

In the ring, his career has an unrelenting pace: he has already been the World Boxing Council youth champion twice in the featherweight and super bantamweight categories, and has accumulated a record of 21 fights won (10 of them by knock out) and 1 draw. , no losses so far.

But Alan is also an outstanding Neuroscience student at the National Autonomous University of Mexico (UNAM), where he arrived driven by his dream of winning a Nobel Prize.

“In five years, I see myself as world champion in super bantamweight with the four main organizations and, perhaps, also in featherweight or super featherweight, being one of the greatest legends, already with two careers finished and involved in a project. With which I can win a Nobel Prize in Physiology or Physics, it is something that drives me every day and I know that with a lot of work and effort I will achieve it, ”said the boxer in an interview with AS México.

Despite his youth, Picasso is interested in helping other athletes so that they can find the support of private initiative and, in this way, avoid abandoning their careers due to lack of resources.

This is what led Rey David to be the first athlete to join SINDE, a non-profit organization whose mission is to put Mexican sports talents on the shelf so that companies turn to see them and sponsor them.

“SINDE is an organization that supports boxers and athletes in general to have that focus of attention, that society turns to see us. Society is what makes us known, fortunately or unfortunately, marketing handles a lot of everything, so, by having more followers, better social networks, it is how we can begin to make ourselves known and, in this way, SINDE enters with us ”, he explained.

Alan indicated that he has witnessed how several of his colleagues who were seeking to consolidate their dream of becoming professional boxers had to resign due to lack of support.

“I have known the careers of many colleagues who, because they have to dedicate themselves to work, abandon the sport, there is a lot of talent but little support, SINDE is an organization that is wonderful for that.

Boxing is very polarized, we say Canelo, Mike Tyson, multimillion dollar purses, fights in Las Vegas, cars, great lives, but the truth is that when you start in boxing they pay you up to a thousand pesos per round, things are very difficult at the beginning of the race, and before making that leap to the big billboards, that support is required, ”he explained.

WHO WILL SINDE SUPPORT?

Bernardo Soto Borja, founder of SINDE, wants his organization to become that last push needed by the careers of various sports talents in order to consolidate, regardless of discipline.

“There are Mexican athletes who have achievements, results, but perhaps many times they do not have the medals or championships, but they still need to take that step to reach the top, a lot has been achieved, but sometimes, in society, we do not put due attention and companies sponsor those who have already arrived and the important thing is to spread these success stories so that they have economic sponsorships and that they can be independent and can pay their own therapist, their own doctor, psychologist, nutritionist and that they do not abandon his career.

Most of these cases are young people aged 17 and above who are dedicated to their discipline and, in addition, study and, in some cases, work, and due to this lack of support, in that short step to reach the top, they abandon their career due to lack of resources.

The Milles Teller without a mustache and a ‘boxer’: when he honored…
Colombia and Cuba open the Continental boxing billboard, which takes place in Guayaquil; Ecuador will enter the ring in the ninth fight | Other Sports | sports
The Kiss band congratulates Tyson Fury and tells him that …
BOXING 4245