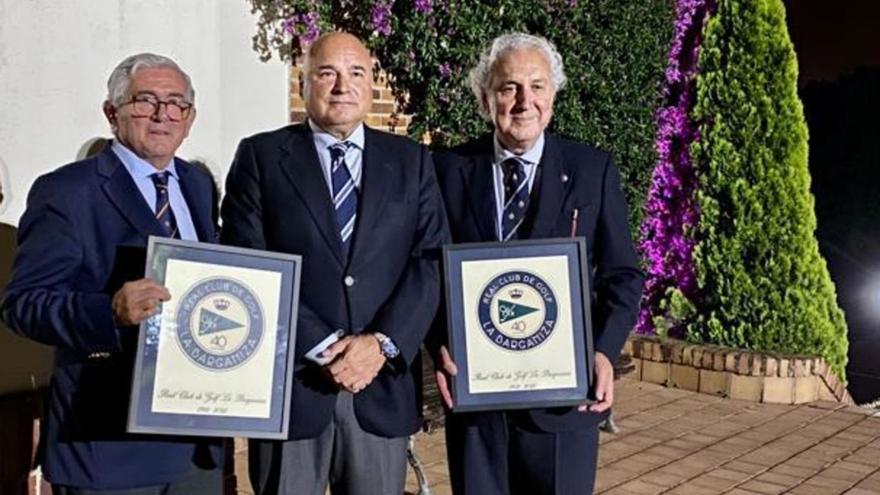 From the left, Gonzaga Escauriaza, Fernando Álvarez-Lafuente and Alfredo Álvarez.

From the left, Gonzaga Escauriaza, Fernando Álvarez-Lafuente and Alfredo Álvarez.

It has been 40 years since in La Barganiza, in Siero, twenty-six people from Oviedo set out to create a golf club, knowing rather little about this sport, although with huge doses of enthusiasm. Four decades later, the entity maintains some 600 affiliated families and is a golf reference in the north of Spain. A few days ago, the club celebrated its 40th anniversary in style, with a party in which its president, Fernando Álvaez-Lafuente, hosted the president of the Spanish Federation, Gonzaga Escauriaza, and the Asturian territorial president, Alfredo Alonzo.

Of the 26 pioneers, only Vicente Rubio Suárez-Pazos continues to be linked to the club, where he often goes to play golf. Álvarez-Lafuente had a special memory for the four presidents who preceded him (José Álvear Díaz-Ordóñez, Vicente Trelles Pérez-Abad, Ramón Rojo García-Conde and Silverio Castro García). He also mentioned Victor Garcia de la Cruz Nájera-Alesón and Javier Nuñez Martínez, architects of the field’s design, and Lieutenant General Juan García, fundamental in the early years of the club.