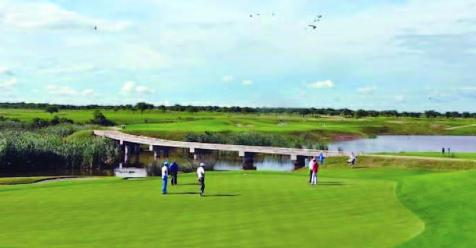 After the presentation of MotoGP 2022 and the PGA Latin American Golf Tour -international events that will take place in the thermal city- at Fitur in Madrid, Spain 2022, the thermal tourist destination has the best expectations for this year.

In this context, the municipal mayor Jorge Mukdise He assured that the “public and private sectors are working comprehensively so that the city and the province can provide excellence in care for visitors from Argentina and the world who will arrive at the NOA portal attracted by these two sporting events.”

It should be noted that Santiago del Estero and Las Termas de Río Hondo played an important role during the International Tourism Fair (Fitur) that took place from January 19 to 23 in Madrid, Spain, and was headed by Ricardo Sosa, executive secretary of the National Institute for Tourism Promotion (Inprotur). The official from Santiago was in charge of the presentations about the province and Las Termas.

Before Spanish journalists, Sosa promoted the 2022 date of the MotoGP, from April 1 to 3 at Las Termas de Río Hondo and the continuity of the event until 2025, becoming one of the few cities that make up the world calendar with a guaranteed presence in the next three years.

It also promoted the PGA Latin American Golf Tour to be held from March 24 to 27 at the Termas de Río Hondo Golf Club.

Loading...
Newer Post
Swafford wins the American Express on a bad Rahm day
Older Post
NBA: John Stockton, an NBA legend vetoed for his position on COVID: “More than 100 athletes have died from the vaccine”