LeBron beats Kobe … not at all 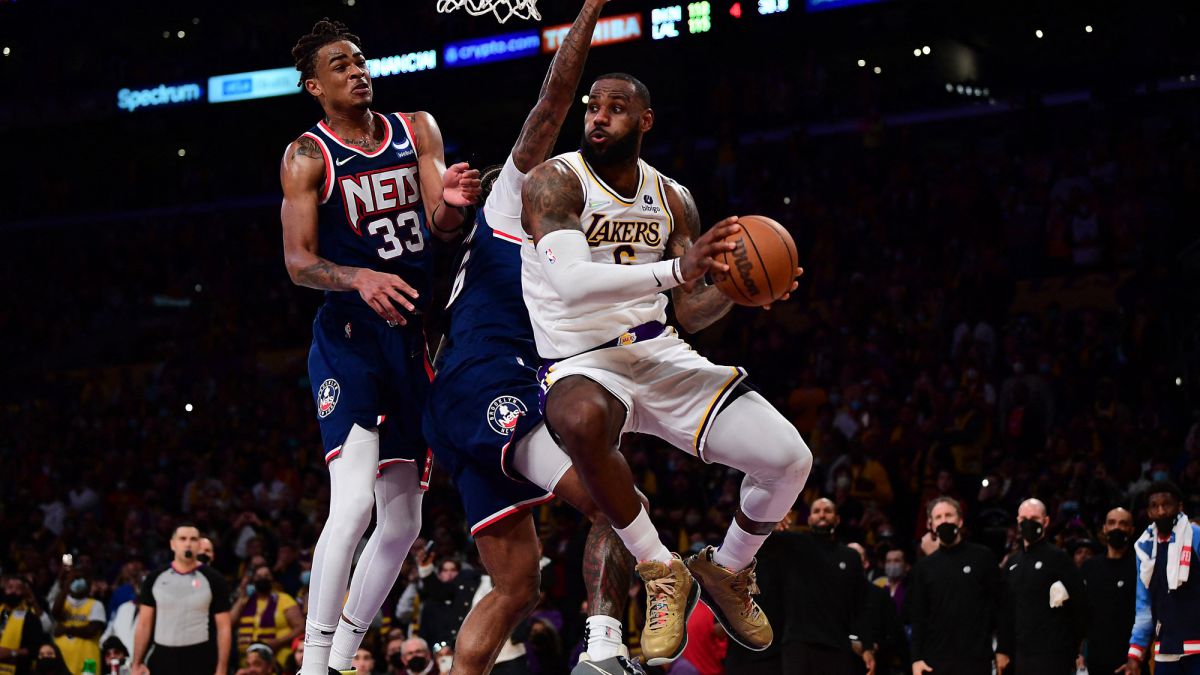 The Lakers have neither health, nor chemistry ... nor luck. Although they do not look for it normally either. Can't say that they have nothing Be

The Lakers have neither health, nor chemistry … nor luck. Although they do not look for it normally either. Can’t say that they have nothing Because of course they have LeBron James. That less than a week after his 37th birthday (more life in the NBA than outside of it) he beat his record for points in Christmas (39 to which he added 9 rebounds, 7 assists and 3 steals) and he surpassed the all-time high in 25-D, which was Kobe Bryant’s until this year (395 points). LeBron entered 400 territory (422) and he played simply fabulous minutes that did not serve his team: 115-122 for a Nets without Kevin Durant and who still do not have Kyrie Irving, their reinforcement for away games. But they are 22-9. The Lakers, after having had the easiest schedule in the NBA, they are marching 16-18. There are five defeats in a row after linking three consecutive victories for the first time this season. Since that 16-13 that gave a minimum of air, everything has happened to them: Anthony Davis knee injury, COVID outbreak. And again to the sewers.

The loss of Kevin Durant, especially, and the absence of Davis (and the No return of Kyrie Irving, which would have been a tremendous media blow beyond all other considerations) they detracted from the duel of prime time from Christmas to great game of the night for the great Christmas public. The least common to the NBA. At least James Harden returned on time, who just got out of the sanitary protocols scored 36 points, captured 10 rebounds and distributed 10 assists. In the final 0-7 that sealed the win in the final 45 seconds, Harden assisted Claxton for a 2 + 1 and made all four of his free throws. The Nets escaped alive from a game they would have lost if their opponent weren’t a mountain of misery and misery – the score was 84-107 with 10:39 left. From there to 115-115 in the last minute, a tremendous reaction from the Lakers, who linked 17-0 and roared with good … to end up losing. This is his season, neither more nor less.

That LeBron is still able to play at this level in his 19th year in the NBA is incredible. That he is so badly surrounded is depressing, including the capon he deserves for his astrays as de facto general manager. He had them in Miami and Cleveland and he has had them in LA Davis is not there, no matter how badly he marched (and it was the case) he was still an essential defensive player, and the pandemic has swept away to avoid the slightest threat of cohesion. Ariza or Reaves are still out and Avery Bradley did not arrive on time. Be that as it may, LeBron signed a +9 in 40 minutes … and the Lakers lost by 7. It’s -16 in just eight minutes. A drama that escaped more or less Carmelo Anthony (17 points, 11 rebounds, 4 assists) and a Malik Monk who returned from the protocols with 20 points. They made their debut as soon as Darren Collison (taken out of retirement) and a Stanley Johnson whose legs felt in a defense that appeared at the end after tragic minutes that had linked with the nonsense behind the previous game, against the Spurs, made their debut. But LeBron’s +9 leads straight to the night’s other big data: Russell Westbrook’s -23 in 37 minutes. The point guard, who had very good weeks and is now in a terrible moment, finished with a triple-double (13 + 12 + 11) that will remain for his historical record but with a deeply bitter taste: 4/20 in shots, a resounding failure in the last minute (with 115-118) and rude disconnections in defense.

This is Westbrook: very good days, days like this … and on aggregate for a full season, less than it takes from a player of his weight and his contract. Shooting problems, decision problems, defensive concentration problems… problems. The Lakers, and LeBron, chose that in the summer, and come to Christmas in the negative, without answers (and surely without questions) and after a few months in which, to top it all, they have never had anything like his rotation type on track. No basketball, no health, no luck. So their heroic comeback came to nothing against a Nets without Durant and hanging on Harden and Patty Mills 3s: 8 (Christmas record) for 34 points and 7 assists. He and Harden scored 70 points, the first couple over 30 for the two since 1993, when Charles Barkley and Kevin Johnson did it for the Phoenix Suns. With more energy and more pace, the Nets spoiled their night with that last-quarter debacle from which they narrowly missed.

The great Christmas party was missing Durant. And he was missing Davis, and Kyrie … It was not, from the outset, what the NBA predicted when it programmed this main course, which, moreover, was less so due to the Lakers’ filthy state of health. A team that right now does not even give for drama: who loses and loses because he does not have players available and because he does not yet know what he has built with those who do play. After the game, David Fizdale asked if anyone knew “any scientist available” to clone LeBron when he was named the problems without the big star on the court of a team he is managing due to the loss of Frank Vogel, also in the protocols . LeBron himself commanded (to a good understanding…) a clear message for the weeks before the winter market closes: “I am not a very patient person… But hey, we are without our coach, with players who have been absent or who have just returned… I try to stay stable. The reality is that no one is going to feel sorry for us”. and reality is that At almost 37 years old he continues to play at an admirable level but what he has around him (partly due to his own sins) is a calamity. And that’s why the negative balance, the boredom (not even for drama, I insist) of his followers and the derailment of everything, even the threat of christmas miracle in an unfinished comeback that finally serves as a metaphor. These Lakers do not arrive. They are what they are, and right now there is no more.