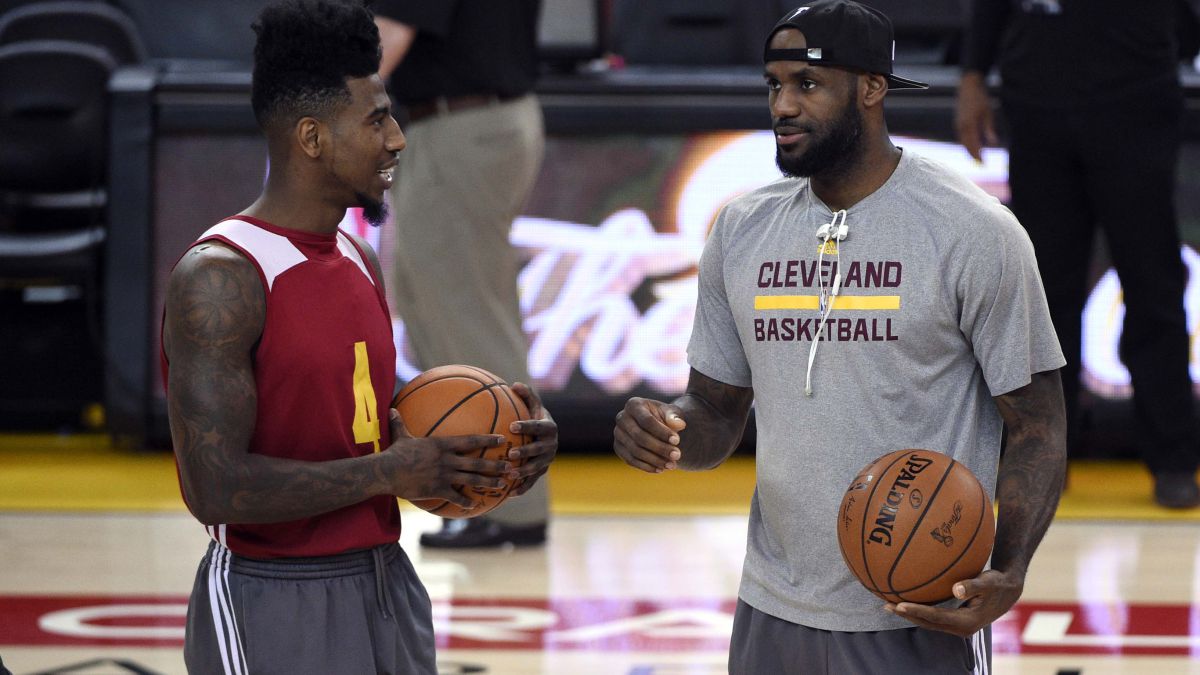 Iman Shumpert is out of the NBA with 31 years and after back and forth with the Brooklyn Nets, his latest team. In fact, in the United States he

Iman Shumpert is out of the NBA with 31 years and after back and forth with the Brooklyn Nets, his latest team. In fact, in the United States he is already better known by the majority public thanks to his enormous success in the dance program Dancing With The Stars (with the dancer Daniella Karagach) and his union with the singer Teyana Taylor. More linked to music than basketball at this point, Shumpert was a draft number 17 in 2011 who lived his best years in the Knicks and especially in the Cavaliers, where he arrived in the rebuild on the go of the 2015 team, the winter he, JR Smith and Mozgov landed to lay the groundwork of the group that was a finalist this season and champion in 2016, after coming back from 3-1 for the first time in the Finals and leaving the 73-9 Warriors behind in an incredible way. In the team of LeBron James, Kyrie Irving and Kevin Love, Shumpert was a backup guard who squeezed himself in defense and put a lot of physicality to pressure the outside with the ball.

He never averaged 10 points in a season, and his career was marked by injuries, especially knee and shoulder, wrist … it ended up going through Kings, Rockets, and Nets, and disappearing from the map. Now resurfaces to leave some statements that are giving a lot of war in the NBA environment. He did them on the podcast The Bootleg Kev Show, where he did not leave a puppet with a head and pointed directly to LeBron James, the leader of the team in which he was champion. And who, of course, did not like the change he made in 2010, when he left the Cavaliers in his native Ohio to go to the Miami Heat with Dwyane Wade and Chris Bosh: “No, the one who ruined basketball was not Kevin Durant with his signing for the Warriors, it was LeBron James before. It was LeBron when he went to play for the Miami Heat. And you know it Bron knows he ruined basketball. Personally, I loved the NBA for the loyalty that there was, the loyalty that I thought continued to exist. But LeBron basically put an end to it, broke that code. It wasn’t what I was supposed to do. “

Shumpert also explained how LeBron began to gesture more and pretend when he took hits because he had gotten tired of being called fewer fouls for being one of the strongest players in the entire NBA: “The worst thing with him was that, we asked him why so long ago flopping. And he told us this, literally: ‘guys, if others take the free throws they take, I have to do it too. They hit me a lot, and I have to sell it to the referees because I am so strong that if I don’t do it it seems that nothing has happened. If I don’t do that, no one finds out about the faults they make me. “

He also remembered the fierce rivalry his Cavaliers had with the Warriors, one of the greatest in NBA history. And he made it clear that he had no sympathy for the San Francisco Bay team: “We had two very different styles of basketball. And we knew that whoever could impose his was going to set the trend throughout basketball. That people would imitate the one who emerged victorious from our duels. We knew that the children were going to want to play post, shoot fade away … or they were going to dedicate themselves to shooting from afar, to believe that that shit of shooting from almost the center of the track is fine. When Stephen Curry started to make those shots, Tyronn Lue would tell us if we were going to go out to play, if we were in shock, he would squeeze us to see what we were going to do … They say they changed basketball, for me they spoiled it. At least the basketball that I like. “

Of course, an exception was allowed with Klay Thompson: “Klay never complained to the referees. If you grabbed him, he didn’t look at the referee, he would hit you on the wrist to let you go. I loved that guy with light skin … he didn’t care, he wanted to fight with us. He wanted to stick with me just to get past a block. He would hit you on the neck and he would go back to the other side of the court without caring. I love guys like that. “

What is the future of Dominican Chris Duarte in the NBA?
Cleveland Cavaliers – Detroit Pistons, live
The unusual comparison to Campazzo in the NBA
NBA 1337