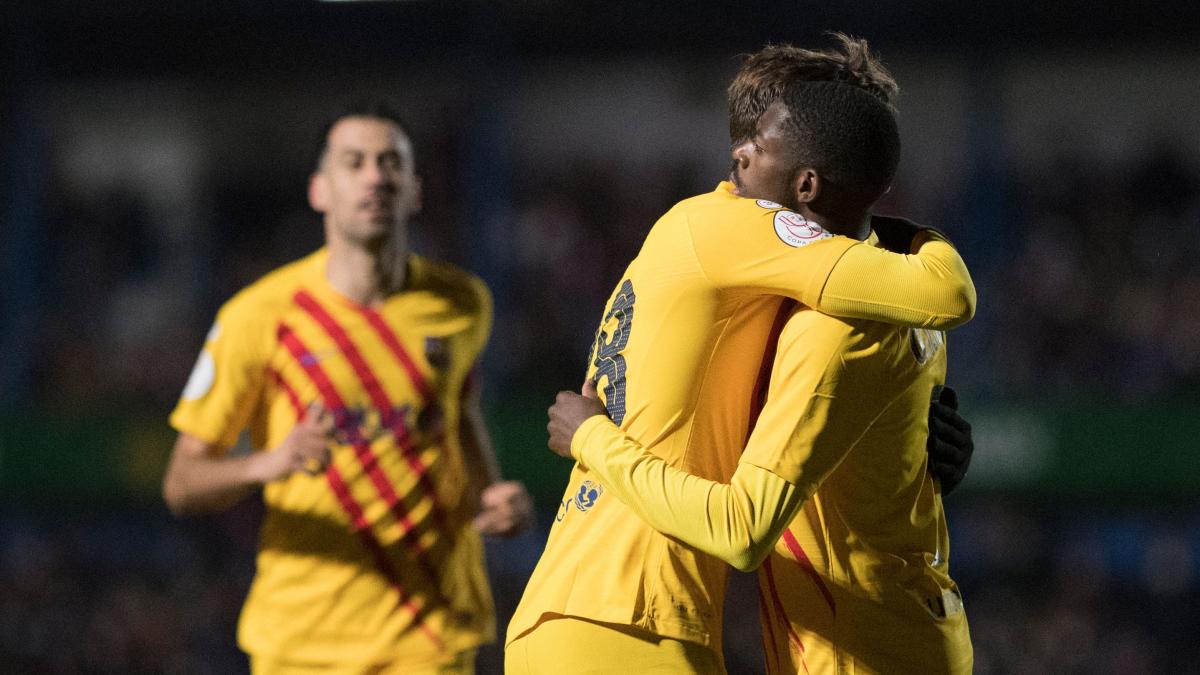 This time it was Dembélé who blew up the crossbar with a cannon shot. He broke two with a feint and then failed to

This time it was Dembélé who blew up the crossbar with a cannon shot. He broke two with a feint and then failed to define only against Razak.

What a shot from Carracedo! He hit the crosshead under the watchful eye of Neto! Barça is saved again …

Ferran warned and he no longer forgave!

Nico gives Alba his heel, he makes her strong and flat and then Jutglà misses the point when he sets his foot and goes off course. He had it to turn the game around!

Neto failed in the last header but was canceled by the assistant for offside. Barça is spared!

The Barça tied that was not comfortable at all!

To the Dutchman for a foul on Razak and to the defender for protesting the play of Barça’s ’21’.

Good move by the Catalans, De Jong opens for Alba, he puts the low center and miraculously Jutglà does not arrive. By the hair!

The second half starts in Linarejos!

Good first part we have seen, with a much superior Barça but without punch, as usual. Linares did a lot with little and for the moment they are going to the locker room winning after an accurate header from Hugo Díaz.

We’ll see what the second half has in store for us!

Good action from Alba, who had a dribble left over and Eric grabbed the rebound, hit him upside down and went slightly off the track. Narrowly!

Sanchidrián center that Josema ends up finishing off. Linares is going against it with danger. Barça should not be trusted too much …

He does not want the game to get out of hand.

How the game gets! Tremendous!

A good move by Alves on the wing, he gives it to Nico who filters it for Ilias and when he was already shaping up for the shot, they touched him a little and he shot wide. Goal kick!

He headed the near post, Razak did not measure well, and luckily for the goalkeeper, the header went wide.

The game starts in Linarejos!

If finally the one from Terrassa bets on 5 defenders, Alves and Alba will be the bands and Jutglà and Ilias will play up. If it is a line of 4 we will see who plays on the wings and who acts as a winger, if Alves or Alba.

In goal, how could it be otherwise, will be Razak.

However, there is something that throughout its history has identified the club: the color blue. It has always been representative of the club and the reason that the team is known with the nickname of the ‘azulillos’.

The Brazilian has already been registered and today he will play his first minutes in his second stage as a Blaugrana.

The Blaugrana defense will have to be attentive to them if they do not want complications.

FC Barcelona begins its journey in the Copa del Rey visiting Linares in full wake of the Kings, with the confidence of the first victory of the year and recovering some cash or cash for the cause. A championship of which he is the current champion and in which he wants to revalidate the title. Here are my 5 tactical keys for this game:

Linares and Barça B faced each other in October, on Day 10 of Primera RFEF, with a 1-2 victory for culé (Etxaniz – Aranda and Meneses pp).

So far, they had been watching the rest of the teams beat the copper to try to pass the round.

Will he get the machado today against Barça?

Linares and Barcelona play their round of 32 final of the Copa del Rey today at the Municipal Stadium of Linarejos. This will be Barça’s first match in the competition and it will do so visiting the field of a First RFEF.