Liverpool vs. Real Madrid: the fourteenth is already in Madrid – Soccer 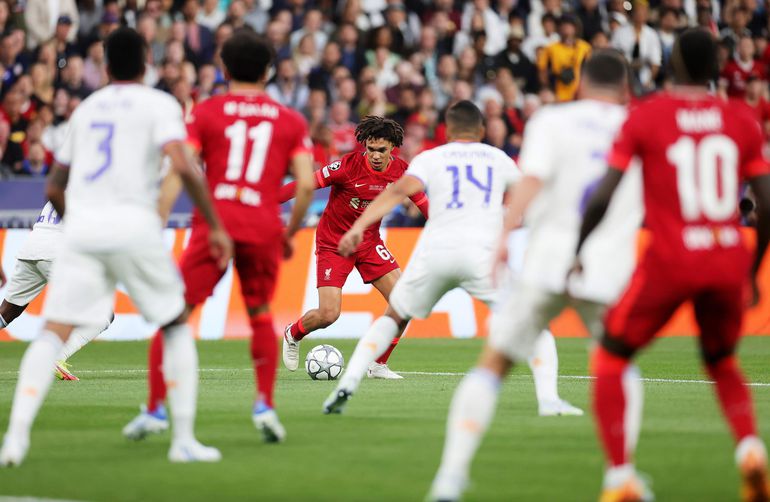 Liverpool vs. Real Madrid: the fourteenth is already in Madrid – Soccer

Real Madrid won its fourteenth title of European champion by defeating Liverpool of England 1-0 with the goal converted by Vinicius in the second half.

Luka Modric leaves for the entry of Dani Ceballos

Salah’s entrance and again Courtois appears to deflect the ball

Center back from Firmino and Keita shot wide

Trent Alexander-Arnold tried with a shot from outside the area

Played from the left of Liverpool, the ball went in the direction of Salah, but Courtois appeared to clear

The Reds press for an equalizer and have a corner kick in their favour.

Mohamed Salah made the diagonal from the right to the middle, finished off the goal and Courtois deflected the ball

After a strong entry on Valverde, the Brazilian Fabinho is reprimanded

Vinicius popped up behind the Liverpool defense to score after some fine play from Federico Valverde down the right.

The English recovered the ball and came through Alexander-Arnold from the right, the center to the middle and Carbajal beat Díaz who entered with danger

Karim Benzema scores for Real Madrid, but after a long VAR review, the referee cancels the goal

Foul on Diaz and there will be a free kick for Liverpool. Madrid controlled the English more because when they have the ball they don’t give it easily

Sensational play by Sadio Mané who finished off the goal, Courtois touched slightly and the ball hit the post

3:54 p.m. Another arrival from Liverpool

The English touch the ball well against a Madrid that cannot cut the connections between the reds, Alexander-Arnold finished up

Overflow to the right and center to the middle where Salah was, who finished off and the Madrid goalkeeper took off in a great way

Liverpool quickly recover the ball and attack, so far it has reached the Madrid area and the defenders are sure to get the ball and make Vinicius play behind Alexander-Arnaold

The English have more of the ball against Madrid, which is not in a hurry to come out to press and when it can, it enables Vinicius, who is the most dangerous of the meringues

3:22 p.m. The show of the singer Camila Cabello begins

The inconveniences continue outside the stadium, some fans try to enter with false tickets, everything is delayed.

2:54 p.m. Incidents delay the start of the match

Incidents between fans of Real Madrid and Liverpool cause the final to be delayed 15 minutes, the start time will be at 15:15.

The City president: “It was hard being there with Florentino by my side”
Barcelona – Real Madrid | The 15 most important classics of world football
Versus / Argentine football starts with the presence of 26 Paraguayan players
FOOTBALL 2775

Loading...
Newer Post
Head of the Red Bull team speaks out for increasing the maximum spending limit in the face of inflation
Older Post
Panorama. It’s a football match and, at the same time, a global party