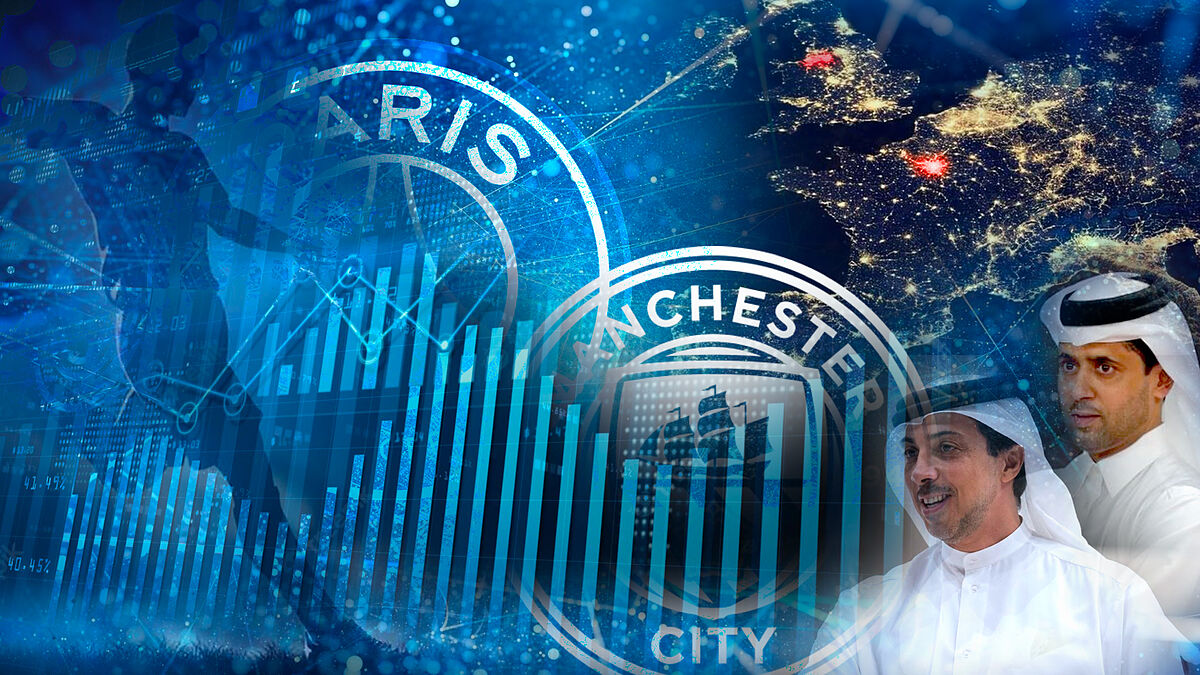 HThey have blown up football as we know it. Two machines to spend money in search of the world throne that one more summer destroy their rivals ba

HThey have blown up football as we know it. Two machines to spend money in search of the world throne that one more summer destroy their rivals based on checkbooks. Two state teams with little sporting history, but that already have in their ranks the couple that will reign in football in the next decade. Manchester City and Paris Saint Germain have devoured the greatest of sports.

They say that when you don’t look at the bank account every day, you’re rich. And that is precisely what happens to these two clubs. They do not check how much they have under the mattress, they simply buy the whim of each summer or interfere in the operations of their rivals, forcing them to pay an excessive price. Their income statements are so absurd that it is totally unfeasible to think of being able to comply with financial ‘fair play’. Just one fact: in the last 10 seasons, if we compare sales and income, PSG has -988 million and City -1046.

Some classic soccer teams that have fought to win the last Champions League (and they have earned them) lives in another atmosphere or even on another planet. Barcelona, ​​economically sunk by disastrous management, survives tied hand and foot without leaving the legality required by LaLiga. The fact that there are teams that play with their own rules distorts the competition and is a threat to the stability of football.

The financial power of these two clubs since the entry of Qatar (PSG) and Abu Dhabi (Manchester City) has meant that money has never been a problem. Neither to spend monstrous figures on transfers nor to pay the highest salaries that football knows. Only small exceptions like Cristiano Ronaldo or Leo Messi (before arriving in France) are out of this equation.

The controversial renewal of Mbappé thanks to huge amounts of millions and millions of euros led many to raise their hands to their heads. The Spanish and Italian leagues expressed their disagreement and in the case of LaLiga a lawsuit has been announced to investigate whether the operation goes out of the financial ‘fair play’ of UEFA and Ligue 1.

What happened in Paris with Mbappé’s new contract is not good, it is absolute evil

Far from questioning the media renovation, the president of the French league Vincent Labrune charged against Javier Tebas and his purpose of investigating her. “We want to express in the strongest terms our disapproval, but also our misunderstanding, at his latest attacks on Ligue 1 and one of our clubs.“, Said the highest representative of Gallic football.

And it is precisely in France where the greatest inequality occurs. According to figures provided by L’Equipe, the Parisian team has 18 of the 20 highest salaries in the entire league. That is to say, there are almost monopolistic particularities that deprive the championship of emotion. Is it the future of the Champions? 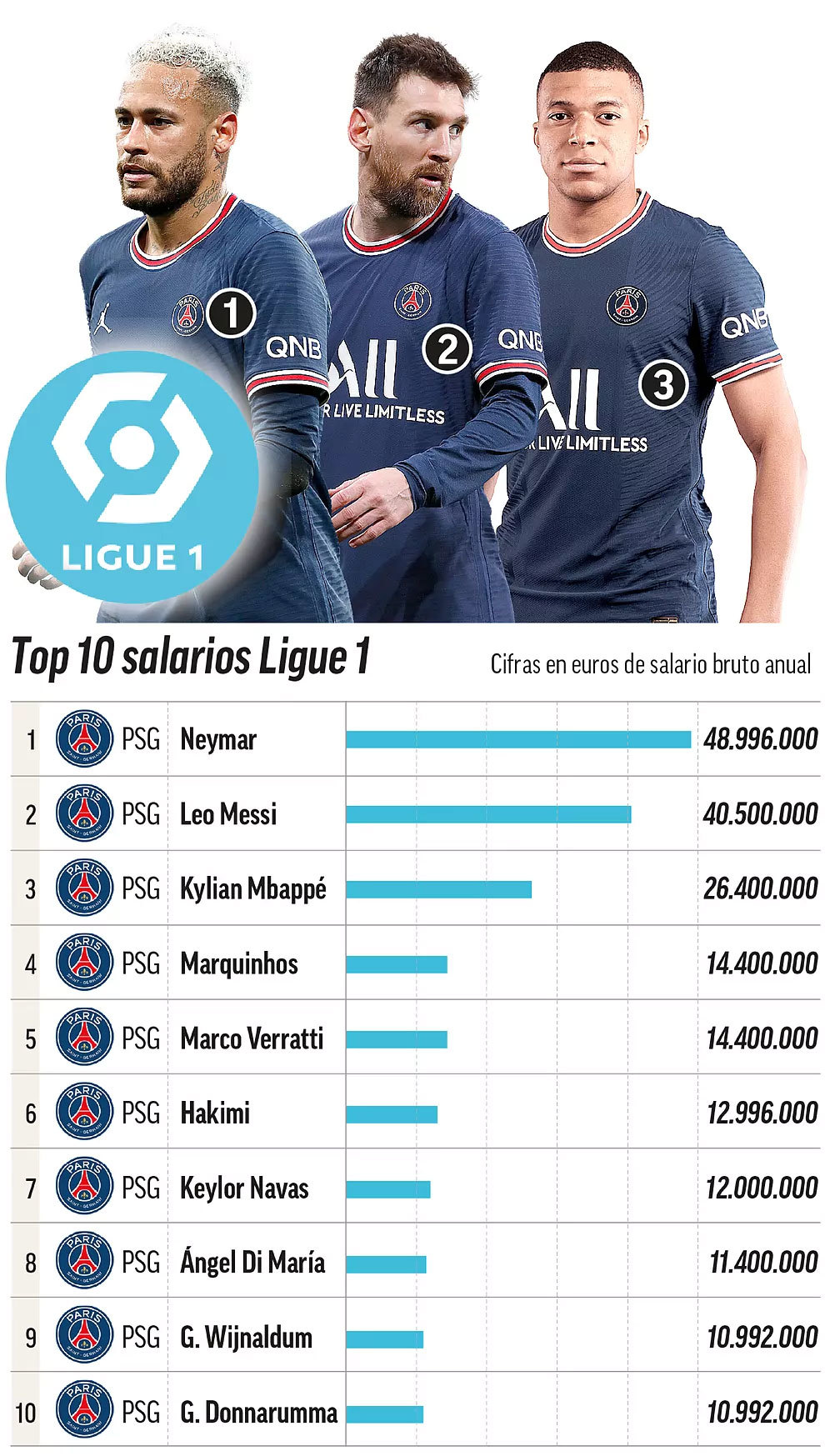 PSG’s overwhelming dominance in their league is beginning to spread to the rest of Europe. In fact, With the signing of Haaland, Manchester City already has the two highest paid men in the Premier League (De Bruyne and Haaland himself). In the table of the footballers with the highest salary on the planet, we find a full number of the clubs that have been in the top five positions.

Only Mbappé, Neymar and Messi total almost 200 million gross per year in salary. Almost the budget of a big club in Spain like Sevilla.

Pep Guardiola’s arrival at City turned the team ‘upside down’ with an economic investment never seen before in football of a total of 1,119 million euros.

More than 400 only in defenses perfectly summarize the way of acting of a team that always achieves its goal. Aké (45 million), Danilo (30 million), Otamendi (55 million), Cancelo (65 million), Stones (55 million), Laporte (65 million), Mendy (57 million), Walker (52 million) and Rubén Dias (68 million) they represent the expense of a club that seems to care about the price.

PSG have played with a double strategy to fill their team with stars. He launched himself for Neymar and Mbappé breaking the transfer market and causing a generalized and unsustainable rise in prices for the rest, and snatched the captains of Real Madrid and Barça with two offers that their lifelong clubs could not reach. That is to say, the sum of transfers and exorbitant salaries has formed a huge and unsustainable eleven for the majority. 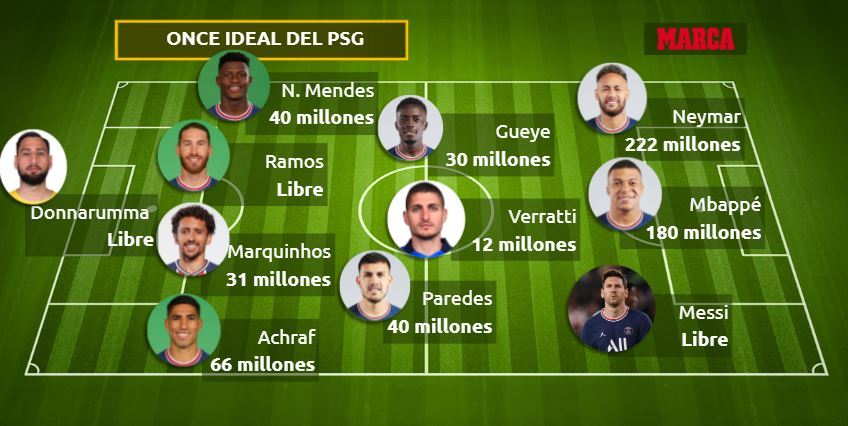 Despite their enormous expense, both teams are still far from the giants that have ruled Europe for a century. According to a Forbes report, Real Madrid is the richest team in the world ahead of Barça. Despite the crisis and the departure of some of its stars, the two Spanish teams continue to lead the transatlantic.

The strength of the ‘state clubs’ around the planet is undeniable thanks to the enormous impact of having players of such a high level. The arrival of Messi increased the merchandising of the French team by 60% and City products are already sold more than those of its neighbor United. However, despite all this growth, they are still far from disturbing the legendary teams that suffer the daily threat of these two organizations that has put football as we know it in check.

Most valuable teams in the world (Forbes)

It seems that from the Persian Gulf there is an obsession with European football. And more specifically, with the PremierLeague. In recent months the purchase of another English team has been confirmed passes into the hands of Saudi Arabia and that he could be the next to disrupt the world football environment.

And it is that Newcastle was bought by one of the most important Public Funds in the world with a value of 400,000 million euros. “Newcastle deserve to be at the top of the Premier League. We want to get there. It will take time, but we will get there.” assure the new leaders of the club. It is to start trembling.

Tags: Claro-MX/Soccer-International
UEFA Conference League 2022: Mourinho ends his drought: first title since 2017 to complete an unprecedented treble in football
Today’s matches May 3, 2022: Schedule and where to watch football live on TV this Tuesday
Wesley Sneijder shocks the world of football with his physical change
FOOTBALL 2717

Loading...
Newer Post
Kamaru Usman’s representative on Canelo: “His mystique is gone”
Older Post
NBA Finals 2022: How many times have the Warriors and Celtics played and how many championships have they won?