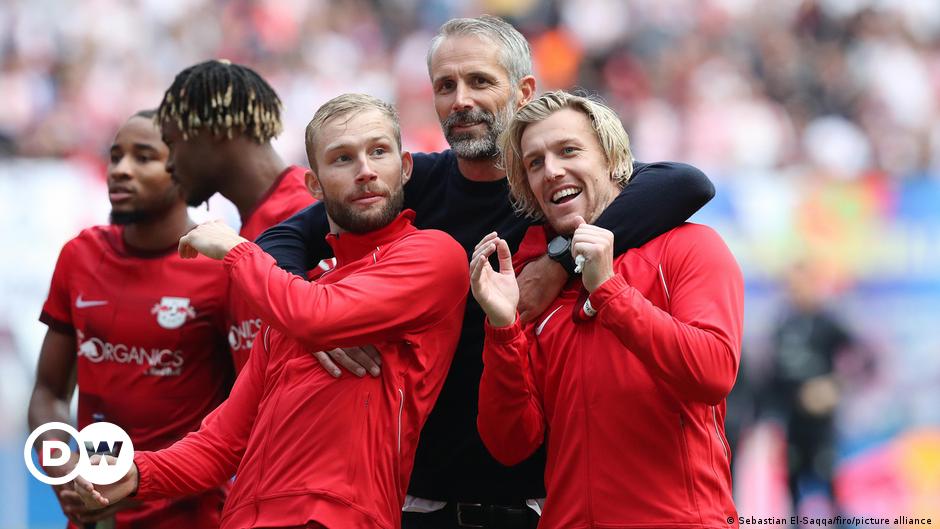 The new coach of the "red bulls" of RB Leipzig knows the mentality of the team he leads now that he has returned to the Bundesliga. But it is not

The new coach of the “red bulls” of RB Leipzig knows the mentality of the team he leads now that he has returned to the Bundesliga. But it is not just any return, there is a path of meetings and reunions in his career in German football .

Taking on the challenge of managing his hometown team, Marco Rose knows what Red Bull’s philosophy means in terms of football since he managed Salzburg between 2017 and 2019, team of origin and genetic code shared with RB Leipzig: fast, high-pressure football, intense with and without the ball.

In Salzburg, the Austrian football club, Rose demonstrated his ability to lead. Or, he found the springboard that catapulted him to the Bundesliga: two Austrian football championship titles, a Cup final and a UEFA Youth League with the under-19s.

But all this, perhaps, also comes from his time as a player, when a footballing idea began to permeate Rose that today stands out among the greatest technical directors of our times: Jürgen Klopp. In Mainz, Rose and Klopp left an indelible mark on the Bundesliga.

There is a close relationship between Marco Rose and Mainz 05. It is the city where his daughter was born, and where he invested money in a house. But, for the purposes of this story, the unforgettable aspect dates back to 2004, the year in which Rose, managed by Klopp, celebrated the club’s promotion to the Bundesliga.

On May 23 of that year, Jürgen Klopp led his team to achieve the goal of climbing to the first division for the first time in the history of Mainz 05. A total of 18,700 spectators witnessed the milestone. The 3:0 scoreline against Eintracht Trier is a historic record for everyone involved. Klopp managed Mainz 05 for seven years between February 2001 and June 2008.

In that match, the young Marco Rose with shirt number 17, jumped onto the field as a starter in the scheme of today’s technical director of Liverpool. And speaking of coaches, in the 77th minute, Fabian Gerber left the field of play after colliding with Sandro Schwarz, current coach of Hertha Berlin and also former coach of Mainz between July 2017 and November 2019.

Jürgen Klopp (left) and Marco Rose, in 2004, the year Mainz 05 were promoted to the Bundesliga

In fact, in the end Marco Rose would take his first steps as co-coach of the Mainz second team in the 2010/11 season, where he lived with another of the current benchmarks on the coaching bench, Thomas Tuchel, during his time coaching the first team. (2009-2014). Back then, Rose was still too inexperienced to be Tuchel’s right-hand man.

Rose in the Bundesliga

At first it was said that Salzburg meant for Rose his entry pass to the Bundesliga. Borussia Mönchengladbach was the club that opened the doors for him and where Rose responded as soon as he settled in 2019. With him, the “colts” reached the Champions League after finishing in the top four in the local championship in the 2019/20 season .

His second season at ‘Gladbach’ fell apart when it was announced that he would leave the team to become the next coach of Borussia Dortmund. In fact, the “colts” did not even manage to sneak into European competitions. Rose had packed her bags.

Finally, in Dortmund he spent almost overnight after a season without being able to challenge the champion Bayern Munich. But after his recent arrival in Leipzig, he has set in motion reconciliation with the past: as soon as he took over the technical direction of the “red bulls”, he crushed Dortmund 3: 0 last day of the current championship.

His next rival is none other than Borussia Mönchengladbach, another team he knows well. Will it be the second chapter of reconciliation for Marco Rose that Saturday in the Bundesliga? (ms)