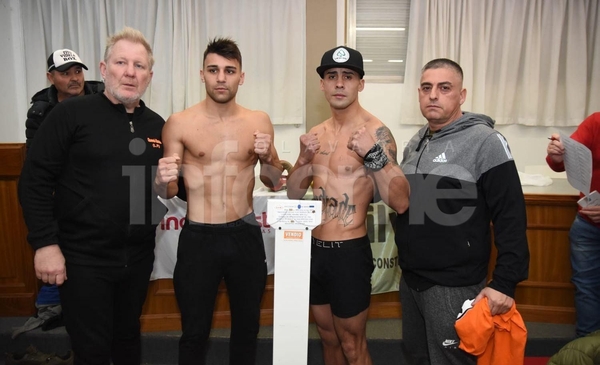 In facilities of the Sports House The official weigh-in of the two professional fights that will close the Boxing evening at the Mariano Moreno Development Society was held.

Friday night will have “flat nose night” from 9:00 p.m. in Mariano Moreno and in the previous one the billboard was officially launched that will close with two professional fights that promise.

In the Semi-fund match, Lorena Agoutborde returns to the City and will face Lilian Silva. The local boxer accused her 57 kilos on the scale and her opponent 56,850.

“I like to fight at home, we prepare very well to return to victory” said the representative of Barragán Box and the woman from Santiago stated that “I’m fine to give my best even though I have respect for all my rivals”.

In the fight between lefties that will close the event, Gerónimo Vázquez, who weighed 65,900, will cross gloves against Denis Andrade, who registered a weight of 65,650 on the scale.

Both southpaw boxers agreed that it will be a good fight.”that had been postponed, but it will remain in the memory of the spectators”.

In addition, “Tito” Videla, organizer of the show together with Carlos Gasparini and the Municipal Boxing Commission, made the presentation of the 7 amateur evenings.

2021 Edomex Boxing Cup concludes
Amazing! Floyd Mayweather leaves two boxing legends out of his top 5
This is how the fighting ended at the Turbaco boxing evening | THE UNIVERSAL
BOXING 3118

Loading...
Newer Post
Due to errors in the River ID platform, fans cannot buy tickets and complaints exploded
Older Post
Vadillo and Brandon play soccer during their vacation in Colombia