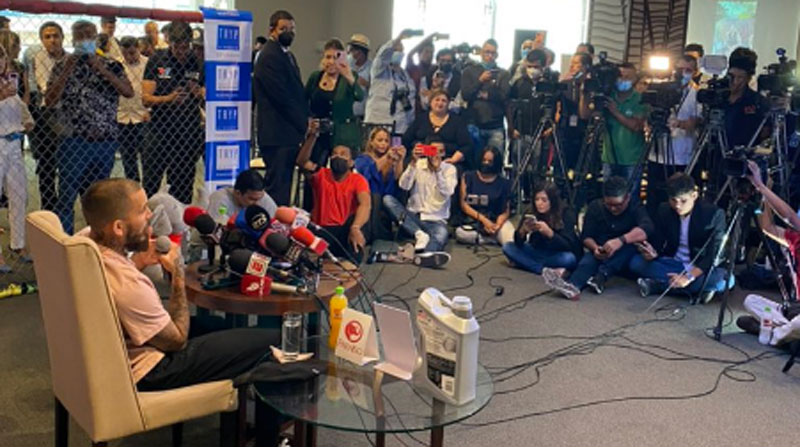 Marlon Vera spoke with the media in Guayaquil on May 30, 2022. Photo: Twitter Marlon Vera

Ecuadorian wrestler Marlon ‘Chito’ Vera participated in a discussion in Guayaquil, on May 30, 2022. The Manabi athlete confirmed that negotiations are under way for his next fight, although the contract has not yet been signed.

Of course, from the UFC they have assured him that it will be a five-round fight. That means that Vera will be the main protagonist of another billboard.

In the Ultimate Fighting Championship (UFC) there are five-round fights when they are the main events or for a world title. In this case, it is assumed that it will be the main event of a card.

In his recent victory against the American RobFont, in Las Vegas, the combat was stellar and five episodes. The manabita won by unanimous decision.

“I can tell you that I will be in the star again, I can’t say more,” confirmed Vera, 29 years old.

What he did confirm was that his rival will not be the Russian Petr Yan, former UFC champion.

A tip from Marlon ‘Chito’ Vera

Marlon Vera spoke about several issues, but one that caught our attention was the lack of support for young athletes by private and public companies. Given that, as an alternative, the manabita gave advice.

“When I first went to the United States, I taught 28 classes a week. It wasn’t easy, but it was either that or go back. You have to find a way to do it. You can work whatever it is, in other countries what there is more is work, “said the athlete, who has been part of the UFC since 2014.

Now, Vera is in fifth place in the UFC bantamweight rankings. He is one or two fights away from a title fight.

Moreover, with his ranking he could be called at any time to dispute the crown if any of the first contenders cannot appear for a title fight. That’s why Vera stays focused and in shape for when she has to take on a last-minute challenge.

His professional record is 19 wins, seven losses and one draw. He won 9 of his last 11 fights and his career is on the upswing.

An event in Ecuador?

After his triumph against Font, on April 30, 2022, people began to talk more strongly about an event in the country. A note about it was even published on the official website of that company.

The idea has foundations. In the UFC, Vera, Michael Morales and Carla Esparza stand out, a world champion who has Ecuadorian roots. In addition, there are other athletes who have options to reach that company soon.

Ecuadorian cyclist Richard #Carapaz talks about his podium at the #Italy spin and the next challenges » https://t.co/hjcpTMePo6 pic.twitter.com/XdcpbxDs2c

UFC: Khabib: “My fight with McGregor is the biggest in MMA history”
Holly Holm doubts the permanence of the UFC women’s featherweight division
Kamaru Usman broke the silence and assures that he can beat Khamzat Chimaev
UFC/MMA 937