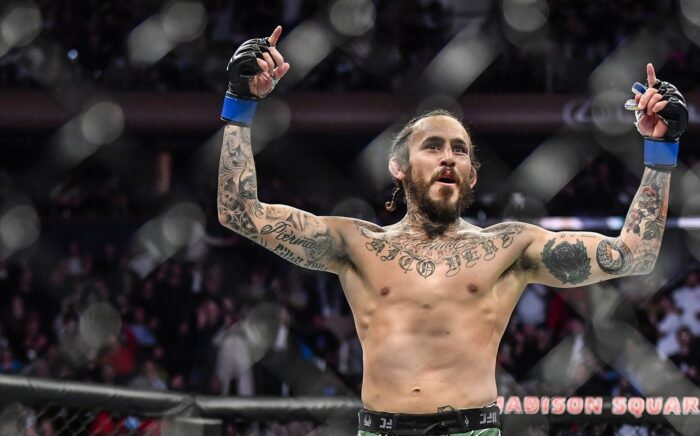 Marlon Vera doesn't care about Aljamain Sterling's personality, but he absolutely respects him as a fighter. At UFC 280, Sterling successfully def

Marlon Vera doesn’t care about Aljamain Sterling’s personality, but he absolutely respects him as a fighter. At UFC 280, Sterling successfully defended his bantamweight title, stopping former two-time champion TJ Dillashaw in the second round of their co-main event.

The champ then delved into his bag of school slurs in his post-fight interview, saying he’d like a fight against “Henry Ce-Doo Doo,” “Sugart***” Sean O’Malley or “Marlon Cheetos Doritos.” . Vera. The comments weren’t Sterling’s best promotional work and upset some people. But for Vera, they were not entirely unexpected.

“I know, but the guy is a nutcase. He has no friends, he always walks alone. The guy has no personality. But he is what he is. … When you have no personality you have to do something like that. You just can’t make a joke for yourself and then again he took the belt and rang. That’s the sad part of the guy. You have the belt! Put it like this.”

“Look how good I am with myself, how happy and confident I am. I’m not even the number one contender. I don’t even have a number 1 by my side I don’t have the belt, it’s just because you’re in a good place in life. Maybe the guy isn’t.«.

If Sterling lacks confidence, it may be due to the controversial nature of his title run. He became the first person in history to win a UFC title by disqualification in his first fight against Petr Yan. Then, after taking home a split decision in their rematch a year later, UFC president Dana White said almost immediately that the judges “screwed it up.” His defense against Dillashaw was then marred by Dillashaw entering the fight with a serious pre-existing injury.

Still, Vera said no one should take any credit away from Sterling for his most recent win.

“It was a great fight. Nothing removed from Aljamain. He won cleanly. TJ came in injured, but he came to fight. If he made it, he’d be a hero right now, but things happen. His shoulder came out and sad for him, but the champion kept the belt and good for him ».

James Toney calls Randy Couture a coward: “We had an agreement for an MMA fight and a boxing match”
UFC Paris 2022: UFC finally lands in Paris with Latin representation
UFC: Khabib: “My fight with McGregor is the biggest in MMA history”
UFC/MMA 1518

Loading...
Newer Post
Weston McKennie, the USA star who gave up American football to play soccer
Older Post
NBA: Bill Russell and the bizarre transfer that changed the fate of the NBA