Marquez responds to “a lot of balls or stupidity?” from Miller 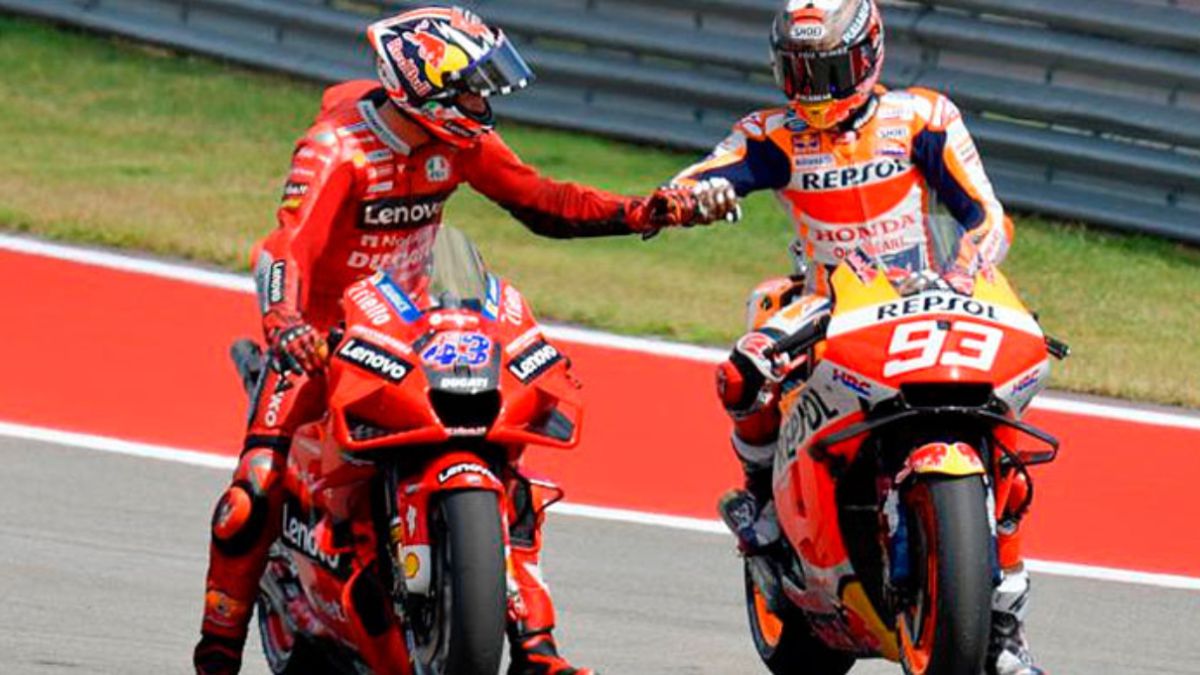 Honda and Ducati showed both sides of the coin in Misano. The joy of the Japanese team contrasted with the atmosphere that was breathed in the Bo

Honda and Ducati showed both sides of the coin in Misano. The joy of the Japanese team contrasted with the atmosphere that was breathed in the Borgo Panigale’s garage, due to results that were reflected as the antithesis of what you expect and try to avoid a team for a weekend racing. While the mark of the golden wing finished with his first double at the top of the podium 728 days later, the Italians finished a grand prize empty where they were the great favorites, due to an unexpected bet on the choice of the front tire that conditioned Bagnaia and Miller’s driving until it caused them to crash.

This result shows that strategies also serve to win races and it was Honda’s, together with the potential that Márquez exhibited at Misano, the most successful to take a very special victory for the man from ilerdense who began to forge himself on the grid. This is how the conversation he started reveals Marc with Miller in the room where the interviews take place and that MotoGP brought to light on its website. “When the Michelin guy told me that the Ducati was going hard, I said ‘okay’ (lowers his elbow with a gesture of victory) “, The eighth champion told the Australian, just after having brought up the subject of strategy, highlighting the bravery of the Italians when choosing tires: “You’ve had balls putting the hard forward.”

Miller didn’t even hesitate to question Ducati’s choice: “Lots of balls or stupid? Which of the two? “. The Australian highlighted a strategy that Márquez also highlighted after studying the piloting of Pecco at the head of the race. Those of Bologna played it by changing the medium at the last minute and from that moment, the Honda driver paid close attention to the behavior of the Desmosedici on the asphalt: “In the final part (Bagnaia) I was going faster than me He started at turns 7 and 8, but because he was going with the H (Lasted) and of course, I couldn’t. He screwed up hard “.

Marc’s analysis kept arising doubts and Honda did not want to stay with them. “Why did you do it?” He asked Miller, and the Australian replied: “The forward midfielder was blocking a lot. The only shit has been where I fell. The rest of the circuit was perfect, turn six was not a problem, zero problems. The problem is that there I got a little closer to ‘Pecco’ and I had to slow down a little earlier at Turn 8, and then I got even closer at Turn 10. I expected you to do the same and that you go out with the yellow one (hard) in front of”.

Ai Ogura and MotoGP: “I know it’s not enough, I keep working”
Rins leads the MotoGP Warm Up in San Marino
MotoGP | Assaults to the World Cup in Misano
MOTOGP 538

Loading...
Newer Post
NBA: Charles Barkley: “I want to be broke when I die, I don’t want to leave all that money to my family”
Older Post
Boxing: Kambosos surprises and wins Tefimo Lpez to take away the lightweight scepters