Maverick according to Maverick – Sport-Journal 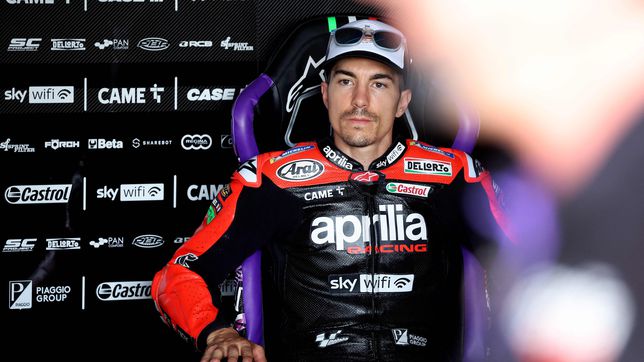 Maverick Viñales had been waiting for some time with AS to give him his point of view on the second part of Top Gun, the film for which it bears hi

Maverick Viñales had been waiting for some time with AS to give him his point of view on the second part of Top Gun, the film for which it bears his name. And he fulfilled it after the race in Germany, where for the first time he really flew with the MotoGP Aprilia, climbing from ninth place on the grid to fourth, with clear chances of a podium, before it broke in the rear holeshot to his RS-GP and had to leave. Here is a Maverick according to Maverick and his feelings after the Sachsenring race that Quartararo won.

“I thought the movie was incredible. It was highly anticipated and has exceeded all expectations. I love the action, but seeing it with Maverick, fighters and so much speed I love it even more. I had a great time and I’ve already seen it three times, in a private session, with the fan club and with my partner, Raquel. It brings back a lot of memories, because I got to see one of them seven times, and I still love the speed and overcoming they have”, says the pilot who a few weeks ago received a message from Tom Cruise on social networks, “from one Maverick to another Maverick”, the actor told him.

Already about his race at the Sachsenring, he looked very happy despite the abandonment: “It was a good race. I’m happy, even though I’ve had problems, but I’m happy with the weekend and I feel better and better. Above all, what I feel is that every weekend I am more prepared, I have to touch the bike less and I can get used to it a little more. The starts are going well for us and I feel like I’m there, that’s very positive”.

Regarding abandonment: “My ‘rear device’ has broken, which we activated to lower the bike. It has stayed low, I have tried to unhook it, but it has not unhooked. I use it manually, but it did not turn off again. If it had been deactivated, I wouldn’t have used it again and that’s it, but it stayed down and wouldn’t come back”.

Regarding his comeback, he comments: “I had a lot of fun, I had a lot of fun, because I felt comfortable riding the bike and that’s very positive. It’s been a while since I felt so comfortable riding, maybe I felt that way in Austin, that I was able to recover a lot. I feel better and better and the team also understands more what I need to go fast. Now Assen is coming and then we have a month to take all the information and in the second half of the season, maybe have some piece that will make us improve more”.

And on whether he planned to pass Aleix or respect him as the leader: “I was breathing because I was coming from behind pushing hard, and I was taking a few laps to breathe and then try to pass him. It wasn’t easy to pass Aleix, because he braked very late, but he was going to try for sure. I’ve learned a lot going after him, where I need to improve. If I can what? Better not (laughs). I have learned where I need to improve and where I am very strong. It’s a bit about my riding, I know where I’m strong riding and where I need to improve a little, and the team has also understood where it should help me with the bike to be better. It has been a very positive weekend, we have been solid for three or four races and building what will come in the future”.

Lastly, it’s nice to hear him talk about his factory: “This race wanted to be on the podium yes or yes. This race was my revenge and I think I was going to get it. But if I can say one thing, it is that we are super focused on improving ourselves and I feel very good working. Aprilia is a great factory and I know very well that both Aprilia and the Piaggio Group are pushing hard to give me what I need, to be there at the front and to be there in every race, not just one”.