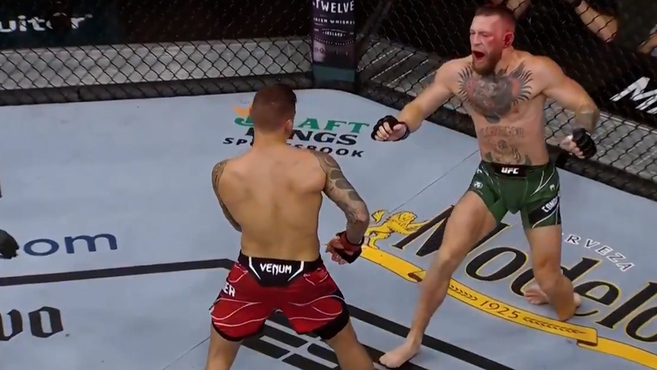 Updated 07/11/2021 - 06:56 Lto third fight between Conor mcgregor and Dustin Poirier got an unexpected outcome in the form of serious injury from

Lto third fight between Conor mcgregor and Dustin Poirier got an unexpected outcome in the form of serious injury from ‘The Notorious’, which saw him suffer a major fracture in his left ankle, which probably affected his tibia. The combat, which I was being dominated by ‘The Diamond’, ended with a technical KO decision at the end of the first round. The Irishman requested that he not compute, but he did not.

“My theory is that the damage was kicked in the beginning,” said Poirier, whose intuition is probably correct. “This is not over, if I have to finish him off, finish him off. I was kicking him, I was ripping off his bloody head”the Irishman said from the ground with a microphone, and while the American spoke, he shouted: “Shut your ass, bitch.”

Conor came out pulling spinning kicks and low kick, matching his fists well; don’t look bad … until Dustin quickly responded with his legs and accurate shots to his opponent’s face. Poirier took the fight to the canvas and there he began to tire McGregor with blows. He was about to knock out before finishing the first round, although already with ‘The Notorious’ injured.

Despite no title at stake, it was about one of the most important bouts of recent years, in which the career of the most popular MMA fighter of all time played his future. Conor probably wants revenge, but the truth is that Poirier go now against Charles Oliveira for the lightweight title. The future of the former champion, in fact, remains in the air as he will first have to recover from a major fracture before fighting again.

Tags: fighting-ufc, sports Center, MMA
UFC: Germaine de Randamie is out of UFC 268 due to injury
UFC: Controversy in the UFC: Reyes does not want to fight with Jon Jones after his arrest
UFC: How much does Ngannou have left in the UFC? The details of his contract confuse his fans
UFC/MMA 159