Mercedes-AMG One: Features, video and photos 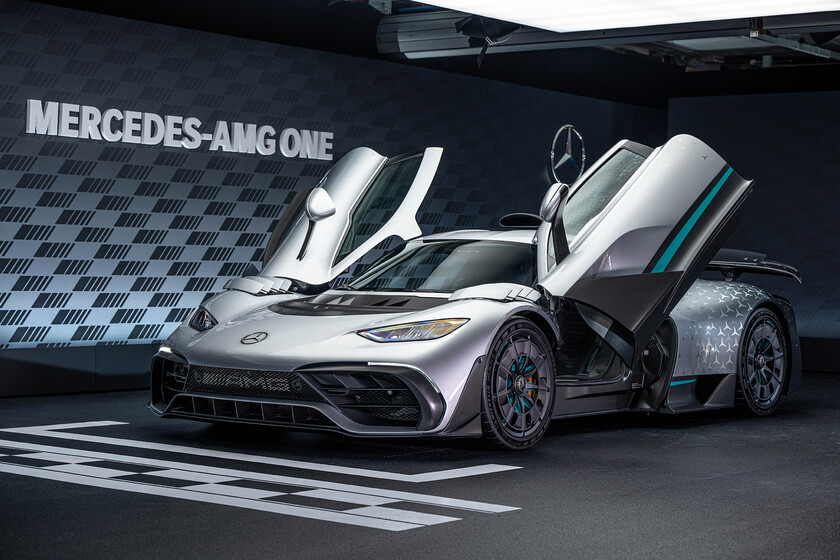 In 2017, Mercedes-Benz came up with the brilliant idea of ​​making one of its Formula 1 cars street-legal. The result, after 5 years of develop

In 2017, Mercedes-Benz came up with the brilliant idea of ​​making one of its Formula 1 cars street-legal. The result, after 5 years of development, is the Mercedes-AMG One. If you want to drive Lewis Hamilton’s car home, all you need is 2.27 million euros and to be on the exclusive list of clients of this exotic hypercar.

What you have in front of you is literally a formula 1 car, but adapted to be able to drive on the streets. The monocoque is carbon fiber, with some new structural elements of steel and aluminum to comply with regulations. All the modifications have the objective of making it legal, safe and comfortable for use on public roads.

Before going into detail about what has changed, let’s talk about what makes it the same as the Formula 1 car of the Mercedes team. The engine is a 1.6-liter turbocharged V6which by itself generates 574hp. Coming from Formula 1, it is capable of turning at up to 11,000 revolutions. In fact, if you look at the tachometer you’ll notice that the redline starts at around 10,000 rpm, although peak power is around 9,000 rpm.

It is powered by the same 1.6-liter V6 engine found in the Mercedes-Benz Formula 1 car.

Added to this is a pair of electric motors installed on the front axle —one on each tire— to generate a total of 326 hp, to which is also added the power of the electric motors installed on the rear axle, with powers of 163 and 122 hp, so that the total power of the Mercedes-AMG One is 1,063 hp. With a weight of around 1,650 kg, you can imagine its stratospheric performance.

The engine is not the only thing it shares with a Formula 1 car. The interior is practically the same because, after all, the chassis is too. The driving position, in fact, is identical, with a seat fixed to the monocoque, and adjustable pedals and steering wheel. The steering wheel is also very similar to that of the competition model, even retaining the button to activate the DRS or one that automatically puts the transmission in the ideal gear to make the most of the engine’s power.

The big difference on board is found in day-to-day amenities, such as the introduction of the MBUX infotainment system, with a fully digital instrument cluster in front of the driver and a screen in the center of the dash for the multimedia system. The interface, like any other of the brand, responds to the command “Hey, Mercedes.”

As expected in a street car, the Mercedes-AMG One It offers different driving modes, from one to drive exclusively in electric mode, to another adapted for driving on public roads, in which you will continue to have an extremely fast car, but at the same time docile and safe for heavy traffic. Among the driving programs are also modes Race, Track, Individual and Race+which offers the closest setup to Lewis Hamilton’s car.

The driving modes also allow the car to transform, depending on the needs of the moment. You will see how the suspension abruptly raises or lowers, how the spoiler opens or closes, how its gills rise and, with the drs buttonhow it transforms to reduce downforce.

Mercedes-AMG engineers not only faced the challenge of transforming their Formula 1 car into a street-legal vehicle, they hit a pandemic in the process. After 5 years of work, the Mercedes-AMG One is ready to start production and gradually reach the hands of its 275 lucky customers. The price of each unit is 2.27 million euros, about 49 million pesos at the exchange rate.

With this car, Mercedes-Benz not only demonstrates that it is capable of bringing Formula 1 technology to production cars, such as the Mercedes-AMG GT 63 SE Performance, but that it literally has the ability to bring the complete Formula 1 car to production. streets.

F1: Ferrari also ‘flattens’ the rear suspension, and we tell you why Red Bull can not
The secrets of Jeddah, the fastest street circuit in F1 where Max Verstappen can be champion
The cry of anguish from an anonymous mechanic who shakes the foundations of Formula 1
FORMULA 1 1545

Loading...
Newer Post
As if in a boxing ring, two men hit each other over a chair on the MIO bus in Cali
Older Post
Boxing: There could be unification of light heavyweight crowns