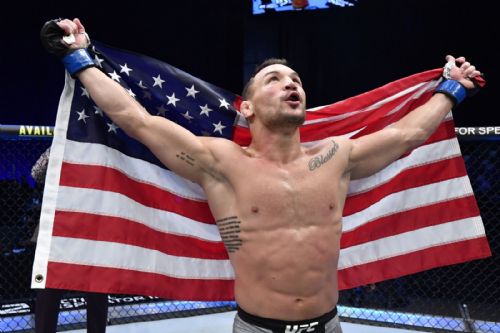 Michael Chandler recently discussed the stakes in his lightweight matchup against Tony Ferguson at UFC 274. The duo will collide at the Footprint

Michael Chandler recently discussed the stakes in his lightweight matchup against Tony Ferguson at UFC 274.

The duo will collide at the Footprint Center in Phoenix, Arizona on May 7. ‘Iron’ declared that with a victory against ‘El Cucuy’, would like to have a rematch with the winner of the undercard’s main event bout between Charles Oliveira and Justin Gaethje.

This is what the No. 5 lightweight had to say in a recent conversation with Morning Kombat:

“Honestly, I think there are a couple of different options after this fight. Obviously, with a win, I think I’ll go out there and beat Tony Ferguson. But I don’t think there is a mixed martial arts fan alive, a live combat sports fan who doesn’t want to see me fight Charles Oliveira or Justin Gaethje. So either way, the winner of the main event on May 7, I think everyone wants to see me fight those guys, especially Justin Gaethje in a five-round title fight. Are you kidding? That’s must-see television, it’s going to be a great pay-per-view.”

Chandler is the bookies’ favorite to beat Ferguson next month. The former Bellator champion will enter the contest having lost his last two bouts. Former interim champion Tony Ferguson is on a three-fight losing streak right now. Both fighters will be looking to get back into the win column when the octagon door closes at UFC 274.

Michael Chandler is eager to face Justin Gaethje or Charles Oliveira again after UFC 274. He believes a title fight in a rematch with Gaethje will produce another classic after the duo engaged in a battle for eternity in the UFC. 268.