Michael Douglas surprises with his physical condition with Wembanyama 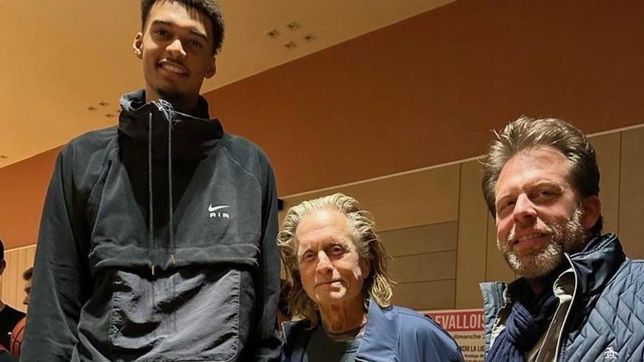 Michael Douglas has always served as an example of maintaining physical form despite the heaviness that the years leave behind. The 78-year-old ac

Michael Douglas has always served as an example of maintaining physical form despite the heaviness that the years leave behind. The 78-year-old actor seemed to beat the passage of time, but in recent months his status has changed radically, his last appearance this Friday being the one that has most worried the millions of fans he has accumulated with film successes such as ‘Basic Instinct’ and ‘Wall Street’.

The American interpreter is in France, specifically in Paris, for work reasons, where he is also taking the opportunity to go sightseeing, walking through its streets and going to different shows and meeting other world stars, or at least in the future, like the player basketball player Victor Wembanyama, who aspires to be number 1 in the next NBA draft, and who has everyone crazy.

Some photographs with Wembanyama

Michael Douglas also wanted to be with him, posing with him in some photos that he later did not hesitate to publish through his Instagram profile: “Fun night of basketball in France and such a great meeting of Victor Wembanyama the future of the NBA ! Thank you Metropolitans 92 for having us!” the actor wrote.

The interpreter has appeared with a much more deteriorated appearance than in recent times, which is precisely what has most caught the attention of his fans, and that is that in February of this year, at the Actors Guild awards gala , Douglas presented a more careful physique.

His long hair, his more casual clothing and his change in face have been some details that his followers have noticed, in addition to, of course, that he seems to be thinner.

Some events that occur a year after the actor himself confessed the short-term memory problems he suffers from: “Throughout the pandemic, in which I have spent much more time doing basically nothing on the couch, I have been surprised by the amount of energy I have lost. And my long-term memory is fine, but short-term… not so much. I’m looking into it.”