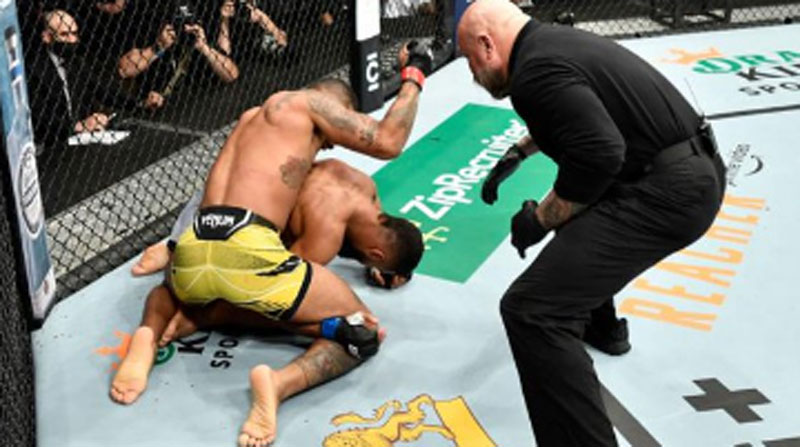 The Ecuadorian Michael Morales Hurtado made his successful debut in the octagon of the UFC. The player from Ourense maintained h

The Ecuadorian Michael Morales Hurtado made his successful debut in the octagon of the UFC. The player from Ourense maintained his undefeated career and won by technical knockout to the american Trevin Giles at the Honda Center in Anaheim, California, United States, on the night of January 22, 2022.

The 22-year-old tricolor once again dazzled with his physical and technical conditions in mixed martial arts (MMA). He won in the first round.

The start of the first round It was favorable for the American, who even connected with a punch to the face that pushed the tricolor back. Then, they fell to the ground and the local attempted the submission. However, Morales remained calm and managed to get out of danger.

Later, with less than a minute to go in the first round, Morales landed heavy punches on his rival until the referee stopped the fight.

“Thank you very much to all the people present,” said the Ecuadorian at the end of the fight, in the octagon, and a standing ovation was heard. Then, he thanked Ecuador, Mexico and his mother in Machala. “Expect more victories for Ecuador and Mexico, so let’s go up Latins”, he added excited after his spectacular victory.

Michael Morales came out to the cage with the flags of Ecuador and Mexico. Photo: Star + screenshot.

As in September 2021 in the Dana White’s Contender Series He faced a strong and experienced opponent who was a tough test in the welterweight category (170 pounds). Tonight was his debut fight in the Ultimate Fighting Championship (UFC).

In that way, the sportsman That was born in Passage, in Gold, increased his professional record to 13 wins no losses. Specialists place him as a potential contender for stellar and championship matches in the future.

Despite his proven conditions, at the moment the young tricolor still has a lot to improve. For a year he has been training under the tutelage of the coach Raul Arvizu at Entram Gym from Tijuana, Mexico.

Morales joined the team a year ago when he traveled with Cesar Abad and Aaron Canarte. The three tricolors arrived at Mexico in February 2021. It was because of the contacts that Abad made with the coach Arvizu.

Morales began practicing judo since childhood, with the guidance of his parents who practice this discipline. Then he also trained in wrestling and at the age of 15 he already began to perfect himself in MMA, in Machala.

In August 2017 he made his professional debut and later became champion of the Ecuadorian league. Emma. He is a specialist in wrestling, judo, Thai boxing and other combat disciplines.

In the UFC the manabita also competes Marlon ‘Chito’ Vera, who has already climbed to the top ten of the Rooster category. Before them, the also tricolor Rudyard Moncayo it was also tested in the early days of the UFC, in 1995.

Among those present at the Honda Center was precisely ‘Chito’ Vera.

#Video | The Ecuadorian player was booked near the end of the match between the #Valladolid and Zaragoza » https://t.co/eriREi5WAU pic.twitter.com/aES9nzHzKA

Combate Global announces 8-fight MMA event, live on Paramount + this Friday
A warrior! After beating COVID-19, Matt Brown wants a UFC star
Woman tries to get into the UFC cage and takes a beating
UFC/MMA 852