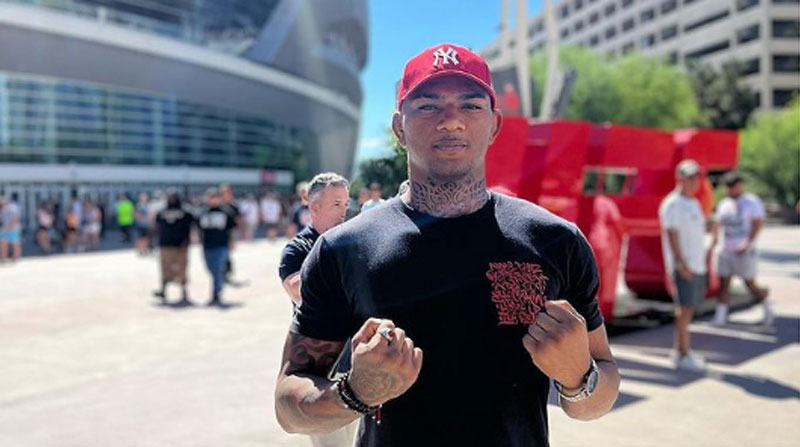 Undefeated Ecuadorian fighter Michael Morales remains firm on the UFC 277 card, scheduled for July 30, 2022, although he will face a new rival.

On July 14, 2022, the athlete posted on Twitter: “It seems that my rival was injured.” However, in one of his last publications, he confirmed the following: “We already have someone to punch.”

As mentioned on specialized mixed martial arts (MMA) sites, such as the Instagram account mmafecuadorthe new rival of Michael Morales will be the American Adam Fugitt, 33 years old.

At first, the Ecuadorian’s opponent was the American Ramiz Brahimaj.

We already have someone to punch 😤

The UFC 277 It will take place at the American Airlines Center in Dallas, United States, on July 30, 2022. In the main match, the champion Juliana Peña will face the former champion Amanda Núñez, in a rematch fight for the women’s bantamweight crown.

As part of that long-awaited billboard will be the Ecuadorian Morales, who has a professional record of 13 wins without losses.

At 22 years old, the tricolor already dazzled in the UFC and defeated the American in January Trevin Giles at UFC 270. That was his debut at the famous Ultimate Fighting Championship (UFC), a company with which he signed a contract when he showed off in September 2021 at the Dana White’s Contender Series.

The Ecuadorian athlete has been exercising for more than a year under the tutelage of the coach Raul Arvizu in the Entram Gym from Tijuana, Mexico.

Morales joined the team more than a year ago when he traveled with Cesar Abbot and Aaron Canarte. The three tricolors arrived at Mexico in February 2021. It was because of the contacts that Abad made with the coach Arvizu.

From the beginning, Morales dazzled with his personality, physique and combat techniques.

Michael Morales began practicing judo since childhood, with the guidance of his parents who practice this discipline. He then also trained in fighting and at 15 years old he already began to perfect himself in MMA, in Machala.

In August 2017 he made his professional debut and later became champion of the Ecuadorian league. Emma. He is a specialist in wrestling, judo, Thai boxing and other combat disciplines.

The LigaPro defined the sanction for Emelec, after the incidents in the match between “Bombillo” and Independiente del Valle » https://t.co/Fqj0vNsO5X pic.twitter.com/o7BoRoSil8

“I could be a champion in MMA”: Daniel Cormier thinks about Steveson
UFC 273: Dana White talked about Khamzat’s next rival if he defeats Burns
UFC: Controversy in the UFC: Reyes does not want to fight with Jon Jones after his arrest
UFC/MMA 1080

Loading...
Newer Post
Guatemalan emigrates to Nicaraguan soccer
Older Post
Boxing: Andy Ruiz affirms that he has a good relationship with Canelo and Eddy Reynoso: “I just wanted my own gym”