Migliozzi wins the French Open with a great last day 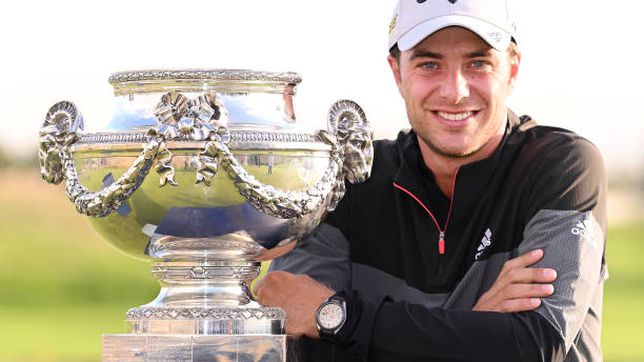 The Italian Guido Migliozzi, with an excellent last lap with 62 strokes (-9), and a total of 268 (-16), surprised locals and strangers alike and wo

The Italian Guido Migliozzi, with an excellent last lap with 62 strokes (-9), and a total of 268 (-16), surprised locals and strangers alike and won the French Open, of the DP World Tour (former European Tour ), which was played at Saint-Quentin-en-Yvelines.

This is the sixth tournament won as a professional by the man born in Vicenza 25 years ago, his third title on a European circuit where he had not won for three years and three months, when he won in Belgium.

He did it this Sunday in France in a way that was as brilliant as it was surprising, since he started with a five-shot disadvantage over a Dane Rasmus Hojgaard who faced the last round as the leader, with an advantage of one impact over the South African George Coetzee and two with the Belgian. Thomas Pieters and Frenchman Paul Barjon.

But it is that, together with the discreet return of Hojgaard, who delivered a card with 68 hits (-3), Migliozzi was superb. His nine birdies, without failing, and despite settling for par in the first five holes, led him to a victory that few believed.

He was able, at least, to force the tiebreaker Hojgaard, because with Migliozzi already at the expectant club house, the Dane still had two holes to face and one shot behind. But he had to settle for par on both holes, which gave victory to the Italian.

Coetzee, Pieters and Barjon had already been left behind, delivering cards with 71, 70 and 70 hits. The best Spaniard was Adrián Otaegui, thirteenth, with 279 (-5, after 72 (+1) this Sunday.