Millionaires, without ideas and with little football equalizes against Pasto 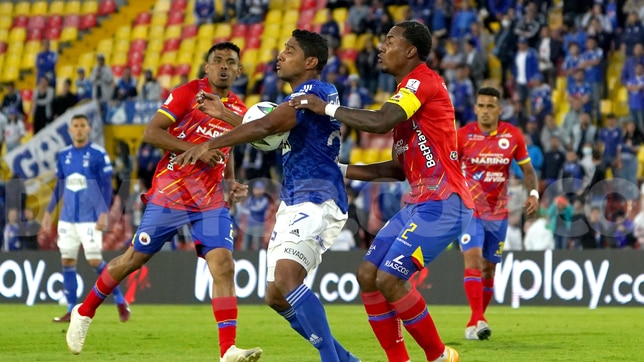 A strong blow at the start of the championship. Millonarios tied with Deportivo Pasto, but the worst was the lack of football from the blue team.

Millionaires, without ideas and with little football equalizes against Pasto

A strong blow at the start of the championship. Millonarios tied with Deportivo Pasto, but the worst was the lack of football from the blue team. Although he tried to break lines with high pressure in the first half, Deportivo Pasto gained confidence and with the speed of his wingers he complicated the blue defense that seemed very slow.

The ambassador team again lacked ideas to break their rival’s defensive line. Once again a rival is planted with a low block in Bogotá to complicate Millonarios. Luis Carlos Ruiz was the highlight, but in the second half he disappeared.

Mackalister Silva and Daniel Ruiz only shone in the goal, then they had a discreet game, with many inaccuracies in the passes. Now, they will have to recover for the next home game against Bucaramanga.

Millionaires faithful to their style came out pressing. In the 8th minute, he warned with a cross into the area, Llinás headed it back but Pereira couldn’t connect it.

Deportivo Pasto complicated the blues defending in a low block. However, Andrés Gómez, who was one of the clearest in attack, had a clear one in the 23rd minute. The winger received only in the area, but the goalkeeper Adres Cabezas narrowed it down very well.

The Bogota team also got complicated in defense by advancing the lines, leaving many spaces for Deportivo Pasto, who in minute 29 had a clear arrival with Mariano Vázquez.

The blues reacted immediately and in the 33rd minute those in the know got together. Crack player between Mackalister Silva, Daniel Ruiz and Luis Carlos Ruiz who received her only in the area to finish off with quality and beat Andrés Cabezas.

Deportivo Pasto takes confidence and Millionaires does not react

In the complementary part, Deportivo Pasto came out to press and reacted, however, Millonarios took advantage of the spaces and in the 50th minute Luis Carlos Ruiz was close to the double. The Blues once again got complicated in defense and in minute 60 came the equalizer, a great overflow from the left by Facundo Boné who finished off a cross to beat Álvaro Montero. Sadness in El Campín.

Millionaires had to advance lines and that served him well. In the 69th minute he narrowly found the second after a great play by Pereira that left Andrés Gómez alone, but once again the goalkeeper cut him down very well.

In the 75th minute, Daniel Ruiz appeared and had a discreet game, however, the ’10’ had a clear goal with a cross shot that Andrés Cabezas took off in a great way.

In the final minutes, Millonarios with the desire to win did not find peace of mind in the last quarter of the field. The ideas were missing again and Pasto managed the time and the result.

On the next date the blues will face Bucaramanga in El Campín. Adding three to three will be an obligation, after the draw on the first date against Deportivo Pasto.