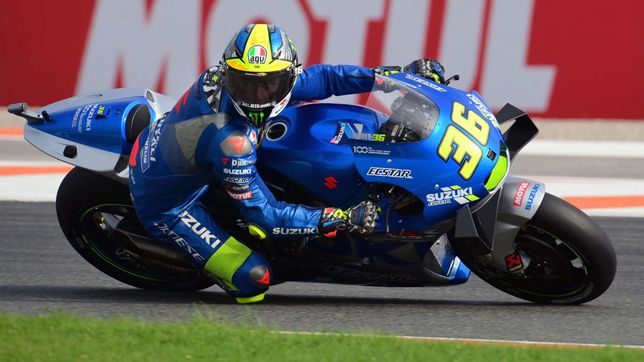 It is not pleasant, neither for the rider nor for the journalist, to ask race after race about the future, to find out if he has a place on the Mot

It is not pleasant, neither for the rider nor for the journalist, to ask race after race about the future, to find out if he has a place on the MotoGP grid next year, but as the market is still open, there is no other choice but to insist . It has happened once again with Joan Mir, who was going to renew with Suzuki before the shock at the Hamamatsu factory, and has long been in the Repsol Honda box, to the detriment of Pol Espargaró and as Marc Márquez’s new partner. However, that move has not just been closed and other names have been mentioned for that position, such as Jorge Martín, still pending what Ducati decides for him and Enea Bastianini, and Pedro Acosta, despite having only a few races in Moto2 .

“Everything about my future is as it was in the previous race and in the other one,” the 2020 MotoGP champion begins by saying before delving into what may be the key to Honda’s decision: “I believe that decisions are not made by two or three races. I believe that this is analyzed by the trajectory of a pilot and that is where the conclusions are drawn. It is clear that getting good results in the last races helps a little, but what helps the most is the trajectory of that driver and not so much if he has had problems or not in the last races or in one. That does not matter”

Regarding the ease of the riders to go better with one or another motorcycle, the Mallorcan points out this: “I think not all of them, but each one has their idea a little of what they need and they have classified the riders by how they consider them to be the pilots. I think that people value the characteristics of one and another rider and also what they hear from those who have them in their pits, about how their bikes are going and the characteristics they have and they can have an idea to think that ‘this rider would work’” . And when asked if he is qualified to ride any motorcycle, he says: “I know a little about my virtues as a rider and the way I like to ride and when I came to Suzuki it was a bit difficult for me the first year, because it was not my style. The way I ride the Suzuki was natural, but then things went really well for me, I adapted and everything went very well. This I think has taught me to say that ‘when I joined Suzuki it was not the one that best suited my style, but we have made it work’. That’s why I think that right now, with a bit of work, you could be fast with other bikes”. So what is the bike that could best suit him? His response: “I don’t know, I don’t know which one would suit me better, but for my style the Honda, well not the Honda, the Yamaha or the Suzuki have never been… When I got to MotoGP I still clashed a bit with these bikes. , But it has not been that way. To the V4 engines? I don’t know, we’ll see, we’ll see.”

And when commenting that his name competes with those of Martín and Pedro Acosta as candidates for the official Honda, according to the rumor mill in the paddock, because Pol has not yet been told that they do not have him, Mir believes that “they are two great riders, world champions Although it’s not my decision and I don’t want to comment on this issue either, the only thing I can say is that they are two great riders. What is said about Acosta being able to go up from Moto2? I’m not surprised at this point. When I was in Moto2 at Acosta’s place I already had it closed at this point so it doesn’t surprise me in the least. No way. For a Moto2 rider to go up to MotoGP in his first year doesn’t surprise me”.

When a pilot finds his perfect machine
MotoGP : The FIM excludes Russians and Belarusians from its races
MotoGP | Rins is fed up: “It’s sad to see people who cut so much”
MOTOGP 646

Loading...
Newer Post
renews with Melbourne until 2035 and will include F2 and F3 races
Older Post
Motorland puts on sale tickets at a reduced rate for the 2022 Moto GP Aragon Grand Prix from today