Mitchell: “I am eternally grateful to Ricky Rubio” 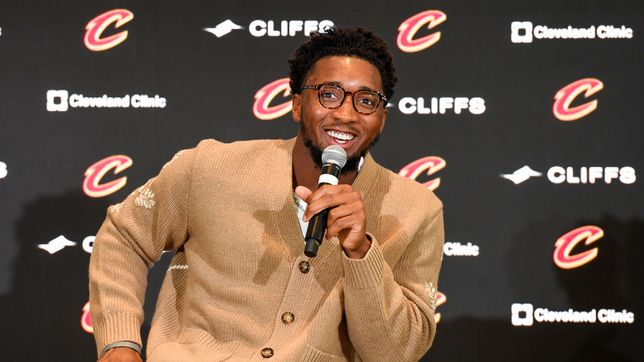 The Cavaliers have progressed and have played everything to the transfer for which they have obtained Donovan Mitchell, who has finished his time i

The Cavaliers have progressed and have played everything to the transfer for which they have obtained Donovan Mitchell, who has finished his time in the Jazz through the back door. The dismantling of Ainge in Utah has taken away Gobert and the shooting guard, the mainstays of the squad for years that they couldn’t stand.

In his presentation with the team, Donovan Mitchell revealed that he hoped to end up in New York for two reasons: the efforts they were making in the negotiations and because it is his home: “Who wouldn’t want to play at home?”

He also assured that he has already been able to get together with Darius Garland, with whom he will share an outdoor space: “Considering myself as a good shooter, I have tried to be at his level and I have been like ‘Jesus!’ the times we train together”.

Mitchell, 26, began his career in the NBA in 2017, just as Ricky Rubio arrived at the Jazz to play two years on Quin Snyder’s team. Both made very good crumbs there and get back together. ‘Spida’ also spoke of the influence of Spanish on his career and even when it comes to allying himself with a new team that will include, in addition to the aforementioned point guards, Kevin Love or Evan Mobley:

“I call him Jesus. He has cut his hair short now, but when he was in Utah he had it long. He is a guy who helped me in everything. In the little details. As for my work, my role, the possession game. I can only see him leading this team from the point guard position, playing that role helping the youngsters as well. I never thought about playing in the NBA and he helped me with the little things in the game. For that I am eternally grateful to Ricky Rubio. He’s a little older now, but he’s still that happy, fun guy I knew. I’ve been to Spain to see him and I was with him, so coming back here and playing with him is really special.”

RELATED | Garland, his new partner: a point guard tailored to the new NBA

NBA Playoffs 2022: Warriors vs Mavs: the change of courier from Curry to Doncic in the West?
The Cavaliers play their best basketball in the NBA after the LeBron James era
NBA rumors: Damian Lillard could sign for Boston Celtics
NBA 3438