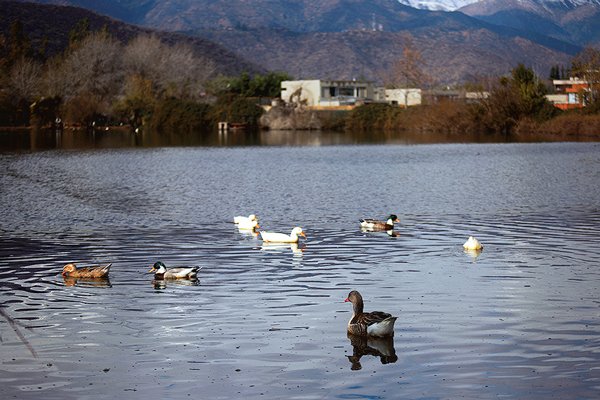 they are already 77 urban wetlands declared throughout the country by the Ministry of the Environment (MMA) since January 2020, date on which Law 21,202 was published. And they keep adding. This Wednesday the portfolio of Minister Maisa Rojas formalized the recognition of three other new aquifers in the north, center and south of Chilewhich in total add up to more than 500 hectares that will be protected to safeguard both its operation, such as the maintenance of the hydrological regime and ecosystem that surround them.

The largest of them corresponds to the main coastal wetland in northern Chile, the mouth of the Lluta River., located in the commune of Arica, Region of Arica and Parinacota, which has an area close to 481.8 hectares. And whose statement was requested ex officio, that is, by the MMA itself, because, according to said portfolio, it corresponds to “an ecosystem that presents high levels of threat due to real estate pressure and has experienced loss of vegetation cover and soil contamination from agricultural use.”

Likewise, it was declared that said aquifer appears as the habitat of species classified in the “threat” category, among them about 130 types of birds (30% of the national total). such as the little tern. And it also constitutes “an area of ​​high heritage value, as well as recreation and tourism for the inhabitants of the city of Arica”, as noted by the MMA.

On the other hand, and with regard to the central area of ​​the country, specifically in the Valparaíso Region, today the protection of the Urban Wetland Estero Agua Salada, of approximately 4.4 hectares, was made official. And unlike the previous case, this declaration process was originated by the Municipality of Papudo as a result of “the great water scarcity that affects the area,” according to the entity on that occasion.

And finally, the MMA made official the recognition of the Curaquilla Urban Wetland, located in the commune of Arauco, Biobío Region, which consists of 79.8 hectares in total. The process was initiated by the Municipality of Arauco in June of last yearand together with this aquifer, submitted the request to declare two more wetlands in the area: Estero El Molino, and La Isla.

It should be noted that as of April 26 of this year, the mouth of the Lluta River aquifer, in Arica, corresponds to the fourth largest declared urban wetland in Chile (481.8 hectares). In the first place, the Itata Wetland stands out, in Coelemu and Trehuaco, Ñuble Region, with an area of ​​918.3 hectares, followed by the Mapocho River in El Monte and Talagante communes in the MR, with 694.5 hectares, and finally the Aguada La Chimba wetland, in Antofagasta, with 504.9 hectares.

Brandon Moreno entered the UFC Top 10 in 2021 – Luces del Siglo
UFC: Darren Till says Jon Jones will be “a toy” for Aspirall
Jake Paul to the UFC? He asked for better conditions for the fighters and challenge a legend
UFC/MMA 964