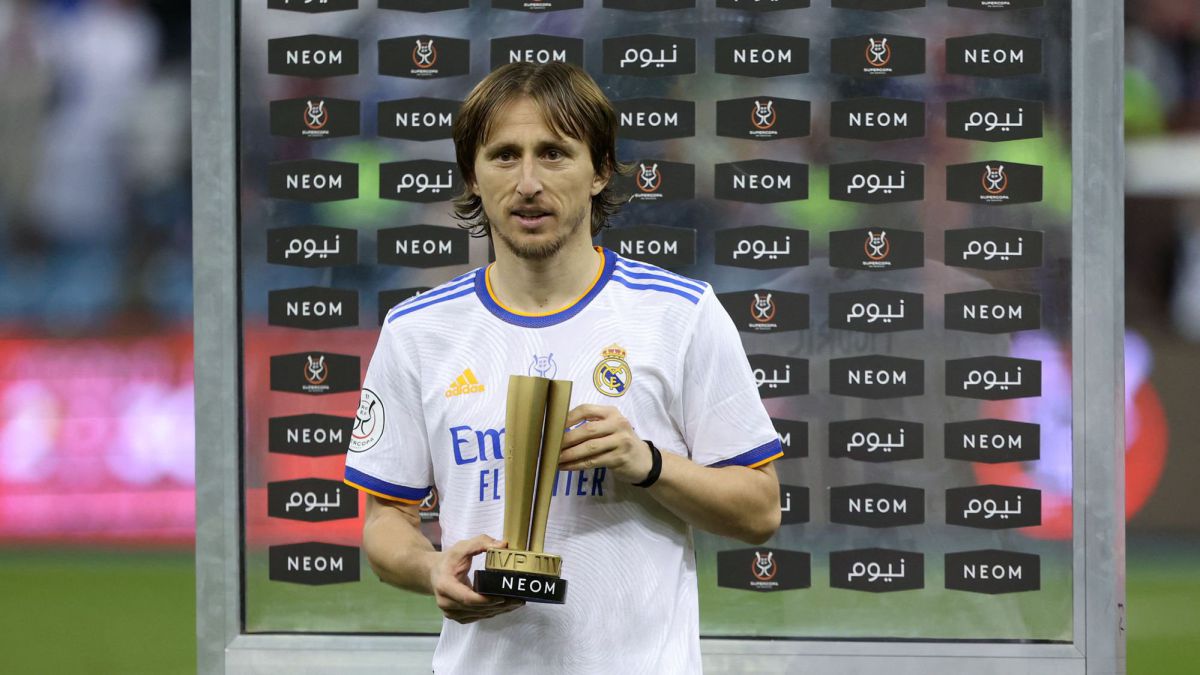 After achieving a new title with which to swell his record and the showcases of the Santiago Bernabéu stadium, Luka Modric once again attracted al

After achieving a new title with which to swell his record and the showcases of the Santiago Bernabéu stadium, Luka Modric once again attracted all the attention of world football. The new display of the Croatian midfielder, underpinned by the first goal in the match, was crowned by being named MVP of the final match.

The country
“Modric is FOOTBALL”
(…) “Rarely have you seen a footballer who runs as much as he thinks. With the Croatian on the pitch, it is always conceivable that there is more than one Modric, many Modrics. The Modric Peter Pan with a youthful spirit who messes around in all sectors as if at this point he should earn the beans of each day. And there is the dean Modric in a top hat, and the one who deciphers the game by heart. Modric is FOOTBALL. The great player of the tournament”. (…)

The world
“A chameleon-like Real Madrid lifts its second Super Cup in the desert”
(…) “From there the 0-1 was born. Rodrygo received in three quarters of the field and his marker decided to give him meters, a mistake. The Brazilian approached the peak of the area, entered and left a soft touch behind for Modric, who first put the ball at Unai Simón’s left height. The Croatian, colossal, took the MVP”. (…)

Sport
“Madrid breaks its drought in white Riyadh and wins the Super Cup”
“Modric liked it and started the ohhh of the Arab fans with a spout in the center of the field. Madrid passed quietly until Militao did his thing again. Third hands inside the area within the match and here it was the referee to the VAR. They were very clear. Raúl García shot and his friend Courtois stopped it with his foot and a spectacular action. The icing on a white Super Cup”.

Sports world
“Real Madrid succeeds Athletic as champion of the Super Cup”
“In Riyadh, in Saudi Arabia, Ancelotti’s team smugly won the first title of the season, beating an Athletic team that never gave up but lacked evil in attack. Without doing a great match, Modric and Benzema, with the complicity of the VAR, wrote their names on the trophy. For the second consecutive edition, the whites wave their success”.

Guardian
“Modric helps Real Madrid beat Athletic Bilbao and win the Spanish Super Cup”
(…) “And if Madrid has athletes, it also has aesthetes: almost a decade later, that midfield is still perhaps the best, Modric continues to defy space and time. This is Benzema, of course, even better than when Ancelotti had him last. Vinicius, unusually calm here, gives them speed but they are also happy in possession, shown when Toni Kroos dribbled out of the area after nine minutes and when the play that gave them the advantage started with Courtois. (…)

Sportske Novosti
“What a dream Luka Modric had in the grand final!”
“Luka Modric is once again the hero of the Real Madrid fans. The Croatian footballer scored the first goal in Royal Club’s victory (2-0) over Athletic Bilbao in the Spanish Super Cup. Apart from that great goal, Modric had some other great plays, and he was officially chosen as the best player of that match.

La Gazzetta dello Sport
“Real always wins”
“Ancelotti lost Carvajal due to Covid and Asensio due to muscular problems, but he recovered Alaba, due to Nacho, within Lucas Vázquez and Rodrygo. And the Brazilian was the liveliest of his team, with Vinicius well controlled by De Marcos, it was Rodrygo who supported Madrid’s attacks and made Modric’s goal, who with his right foot found his first goal of the season and at 36 years old he became the oldest scorer in the Super Cup”.

French Football
“A Super Royal”
“After an intense and fairly balanced start to the game, the people from Madrid opened the scoring through Luka Modric, who took advantage of a perfect cross from Rodrygo (38th) with just one touch. At 36 years old, the 2018 Ballon d’Or winner showed that he still had magic in his feet by scoring this magnificent goal that confirmed the dominance of an imposing Real”.

Clarion
“Real Madrid beat Athletic Bilbao and won the Spanish Super Cup”
“The match progressed in the way that was convenient for Athletic, without important things happening, without him suffering too much to keep his goal at zero. But Real Madrid needs very little to be lethal. In the 38th minute, Rodrygo gave Modric a back pass so that the Croatian, from the crescent, beat Unai Simón with a shot close to the left post. And King Fahd celebrated it unanimously. The vast majority of fans were Real Madrid fans, under the spell of Benzema, and they even whistled at Athletic at times”.

Ole
“Real Madrid, champion of the Super Cup”
“Again champion, again Cibeles will dress in white. Real Madrid beat Athletic Bilbao 2-0 with a goal from Luka Modric and another from Karim Benzema from a penalty and won the Spanish Super Cup title that was played in Riyadh, Saudi Arabia. Possession, thanks to the control of the experienced Toni Kroos, Luka Modric and Casemiro, went to Madrid”.

or game
“Real Madrid beat Athletic Bilbao and win the Super Cup”
“Real Madrid won the twelfth Spanish Super Cup in its history, after beating Athletic Bilbao 2-0 in the final, without reply, in Riyadh, in a match in which the rival did not bother us much. Veteran Luka Modric, 38 minutes into the game, and Karim Benzema, 52 minutes from a penalty, scored the goals at the King Fahd International stadium, where the leader of the Spanish League was superior to the current ninth-placed team, who would miss a penalty in the final minutes.

Kickers
“First title after Ancelotti’s return: Real Madrid wins the Super Cup in Saudi Arabia”
“Real Madrid secured their first title since the return of coach Carlo Ancelotti after beating Athletic Bilbao 2-0 in the Spanish Super Cup final in Saudi Arabia. In addition to Alaba and Vázquez, Rodrygo was also new to the team. And the Brazilian played a decisive role in the opening goal. He quickly got into the penalty area on the right and hung up for Modric, who put the ball into the goal (38′). The deserved advantage of the record champions, who had previously fought against Athletic’s consolidated defense despite their superiority”.

The emotional video of the Professional Football League for the return of the public
Chelsea is for sale; Roman Abramovich seeks to avoid problems
How does Ecuador qualify for the Qatar 2022 World Cup? | Soccer | sports
FOOTBALL 2337