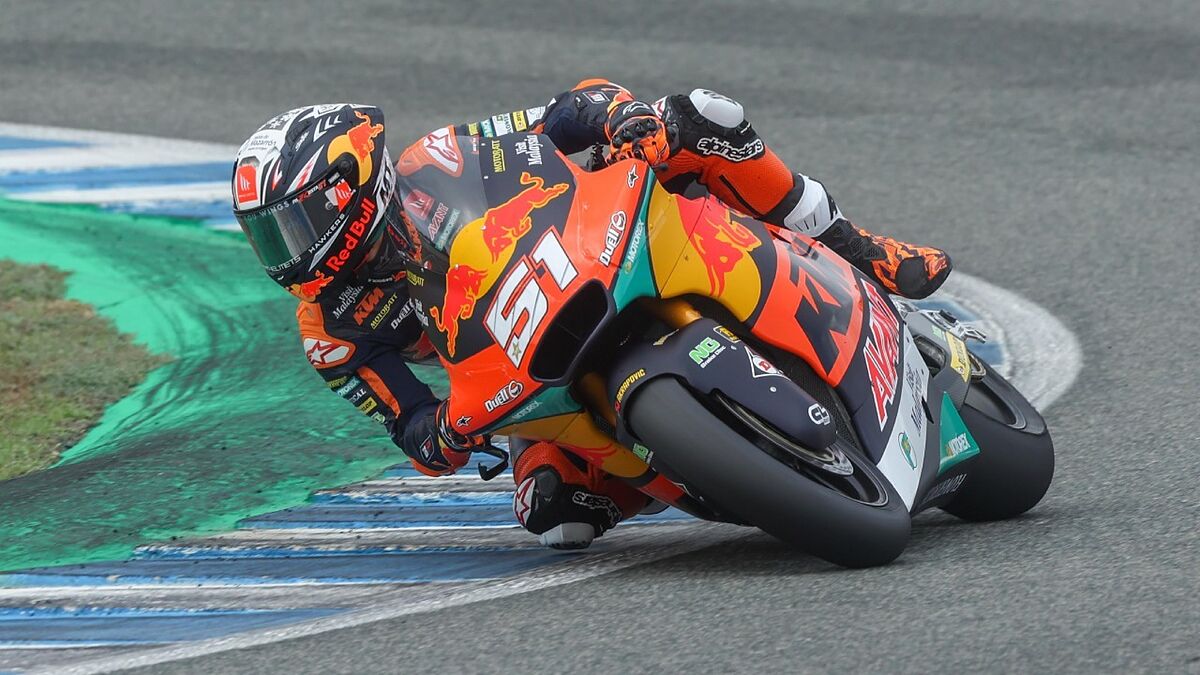 Updated 11/22/2021 - 18:32 ANDThis Monday they have started in Sherry some joint tests of Moto2 and Moto3, where the great protagonist has been P

ANDThis Monday they have started in Sherry some joint tests of Moto2 and Moto3, where the great protagonist has been Pedro Acosta, brand new world champion, that today has been able to debut his Kalex from the AJo KTM Moto2 team, and has worn its new number, # 51.

The choice of the number is a tribute to Paco Marmol, its discoverer when he was a child and director of the most prestigious pilot school in the Murcian Community. # 51 was the number Maramol uses on his own motorcycle.

It was a little before 2:00 p.m. when the youngest champion in history got on his Moto2 Kalex for the first time and had the first contact with the category to tackle next season 2022.

The day woke up with fog and a lot of humidity but it got better as the hours passed and there was no trace of rain on the horizon, although the track was cold all day and that meant that the temperature of the tires was not ideal. , causing many falls during the day, 14 in total.

Many changes of drivers in different teams, case of Aron Canet and Jorge Navarro, now in the ranks of Pons Racing, Tony Tree on the Marc VDS as Sam&#8217;s teammate Lowes which continues one more year in this structure. For his part, Argentine Gabriel Rodrigo also makes his Moto2 debut, while Fenati who already raced in Moto2, returns to the category hand in hand with the Speed ​​Up team with the Spaniard Fermn Aldeguer as a teammate.

The Cadiz pilot Marcos Ramrez, also debuts new equipment and colors. In this case, it goes from American Racing to MV Agusta Forward Racing. For his part, Filip Salac and Alessandro Zaccone take the witness of Giannantonio and Bulega at Federal Gresini Racing.

As for the unofficial times, Celestino Vietti managed to set the best time of the day with 1.41.706, followed by Spanish Aron canet with 1.41.931. Third best time for Fermin Aldeguer with 1.41.959, followed by Jake Dixon with 1.42.209. Fifth fastest time for Simone Corsi 1.42.330, with the Spanish Augusto Fernndez, sixth, with 1.42.410. He also spanish Albert Arenas, finished eleventh with 1.42.834, whiles Pedro Acosta, in his first contact with the intermediate category, achieved a record of 1.42.895 that raised him to the thirteenth place completing a total of 41 laps to the Jerez track.