MotoGP 2021: Rossi: “Lorenzo? It was difficult not to fight” 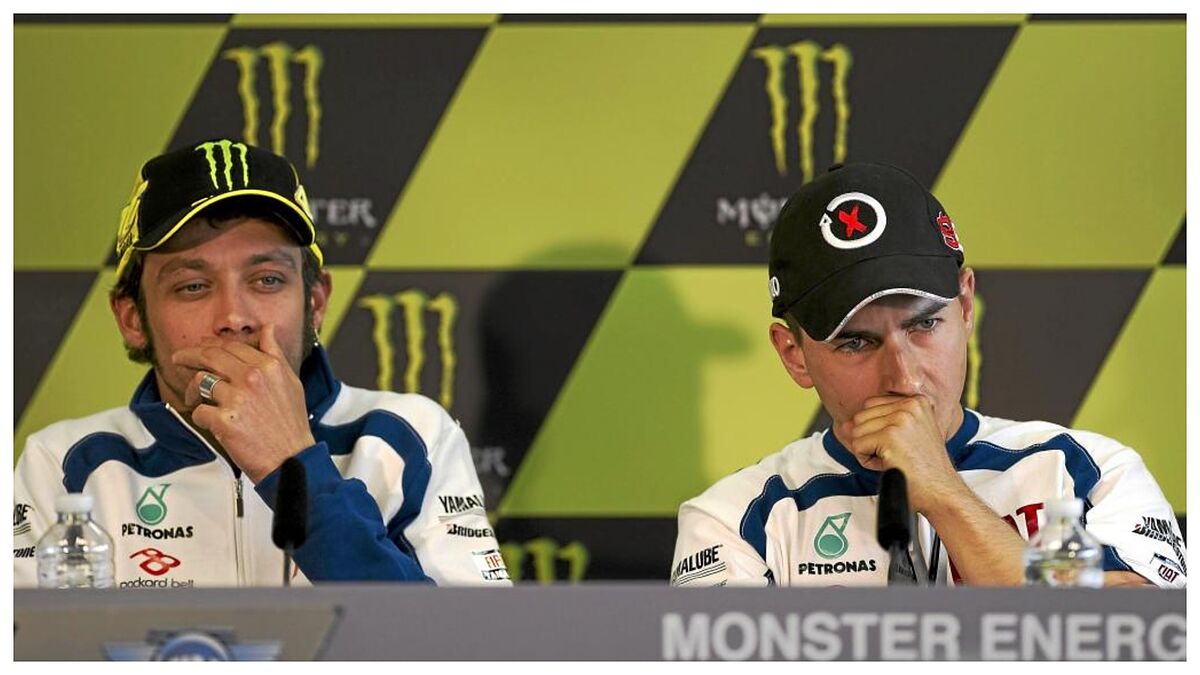 Valentino Rossi and Jorge Lorenzo Now they get along very well. So much so that the Spaniard, at the Ricardo Tormo circuit, even went to greet the

Valentino Rossi and Jorge Lorenzo Now they get along very well. So much so that the Spaniard, at the Ricardo Tormo circuit, even went to greet the Italian after he left. But it wasn’t always like that, far from it. The man from Tavullia gave an interview to ‘In Depth’, Graham Bensinger’s program, in which he spoke about his relationship with the Mallorcan, his future, etc.

Regarding the one in Palma, the interviewer asks him about Lewis Hamilton and Nico Rosberg and how it all went wrong. Which is comparable to the case of Vale and Jorge. “It’s very similar. They were more friends, compared to Lorenzo and me. Two top riders, with the best team, the best car, or in our case the best bike. The problem is that you fight for the same goal, so there are a time when your paths do not go straight. It is not easy because everyone wants to win. It’s hard because something happens. Something happens in the circuit, normally, the voltage is very high. Maybe you say something in an interview with journalists, in which you say something bad about your partner… and it’s not easy. It was hard not to fight. Worst? It was in 2009 in Barcelona. When we fight throughout the race. In the team there began to be some problems. For one part it was a great joy because I won; the others were angry…”, he comments.

The Doctor recounts when he decided to leave Yamaha because of that. “In 2008, Yamaha decided to make a team with two top riders. I got angry with Yamaha because I said to myself: ‘I come here, I win after 20 years, I deserve a pilot who is a little less than me”, but no, they decided to do it that way. This made me change bikes and go to Ducati because with Lorenzo it was difficult,” he says.

Rossi evokes that already at the beginning of 2012 he offered to return to the Japanese and that he thought about withdrawing. “First, the Japanese engineer who took me to Yamaha (Masao Furusawa) had retired and I lost a big part of my relationship with Yamaha. Lorenzo was staying and I felt that the team was pressing for Lorenzo. And I decided to change. The lap was interesting “I tried the Ducati and I didn’t feel comfortable with it. I had an operation on my shoulder, but I wanted to win with Ducati. But it wasn’t going well and I went to Yamaha and told them: ‘I feel bad, I want to go back’. They said: ‘ No, it is not possible’. At the beginning of 2012, they told me: ‘There is no way’. I was very worried, I thought: ‘I have to retire because I don’t want to race with Ducati anymore, but honestly, there are no other places that I like.’ But, three or four months later, something changed in Japan and they decided to open the team for me. It was a great moment,” he recalls.

A son and goodbye

Valentino also talks about more personal things, because he even eats with the journalist in his restaurant and with Francesca Novello. “We would like to have a boy too,” she blurts out. “Yes, but no more than two,” he replies. And he talks about his goodbye. “I started thinking about retirement in 2019. The results were not good after Austin. Then, in 2020, with covid, I spent two months without riding a motorcycle. I understood that I could survive without them,” he concludes.

Loading...
Newer Post
in that order” to promote a new academy
Older Post
“My departure from PSG? I wanted to show myself to the world and enjoy football”