MotoGP 2021: The manchego who follows in Acosta’s footsteps 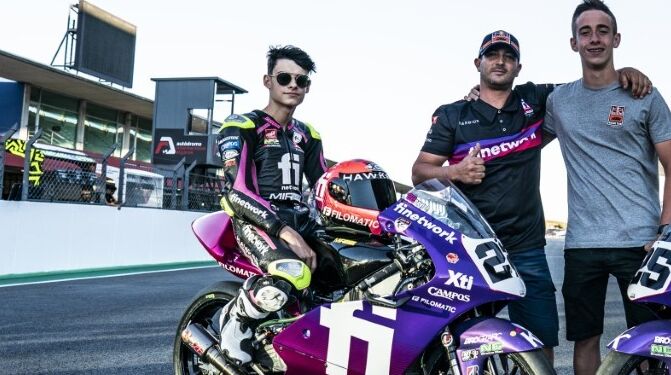 David Almansa (1/22/2006, Argamasilla de Calatrava) is facing some key months in his career as a motorcycling pilot. On a test to conclude his par

David Almansa (1/22/2006, Argamasilla de Calatrava) is facing some key months in his career as a motorcycling pilot. On a test to conclude his participation in this edition of the Hawkers European Talent Cup, the young pilot mentored by Pedro Acosta you already have insured the jump to the Moto3 Junior World Championship thanks to the support of Finetwork, Hawkers and MIR Racing, who have bet on their talent to the point of launching their own team with a very defined horizon, making their debut in the Moto3 World Championship &#8220;in 2023 or at the latest in 2024 &#8220;, as it points out Javi martnez, your manager and project director.

Javi Martnez was the one who boosted Pedro Acosta&#8217;s career by looking for him a seat in the FIM CEV when he had nothing but the Red Bull Rookies Cup in 2019 and who convinced Albert Valera, Jorge Lorenzo&#8217;s former manager, to promote the race after much insistence. world champion of the current Moto3 leader.

David Almansa&#8217;s debut at the Hawkers European Talent Cup could not be better, as the Finetwork Hawkers Mir Junior Team rider was awarded the victory in the second race in the Portuguese circuit just like Pedro Acosta did in the World Cup, surprising everyone with his skill and courage. It is something that very few pilots have managed to achieve, to win in the first grand prix and that. shows the great talent you have Almansa, affirms Martnez. Now, he wants to close this stage in style, hence for the last test his objective is clear: &#8220;I want to win both races and say goodbye like that in a big way of the category, &#8220;he proclaims confidently.

His talent is such that Pedro Acosta, current leader of the Moto3 World Championship, has sponsored him and at the end of the World Championship he plans to move to be able to take a more specific preparation with the Murcian and Francisco Mrmol, your preparer. A difficult decision for a 15-year-old teenager, but one who knows that dreams are fulfilled through hard work and sacrifice. &#8220;He is a pilot who is very involved with me and I have to take the opportunity to be with him&#8220;Almansa points out about Pedro Acosta.

Last year he could not run the last two tests due to lack of resources, which is why he now confesses to living &#8220;a dream&#8221;, in that new project in the Moto3 Junior World Championship, where he can count on the support of major Spanish brands who also bet and they bet on Pedro Acosta, Finetwork, Hawkers and MIR Racing. They will have a team with its own resources and whose objective is &#8220;become a worldwide reference and be able to be in the MotoGP World Championship in a maximum period of three years &#8220;, says Javi Martnez. It so happens that Pedro Acosta found himself in a similar situation, without aid or support from the institutions and he saw himself with a foot and a half out of the World Cup before it even started.

That is why Pedro Acosta and Francisco Mrmol have decided to reach out to Almansa and make him part of their work team to make a call to institutions and companies to bet on talent from the base.

&#8220;I want to put Argamasilla de Calatrava on the map&#8221;, says the young pilot, &#8220;but we need help from the institutions. My father has a motorcycle workshop and he makes a lot of efforts since it is a very expensive sport. There comes a point that you can&#8217;t go any further without sponsors or help, &#8220;he recalls.

&#8220;It is a pity that a pilot with the talent of David Almansa could not demonstrate his potential because he did not receive sufficient support,&#8221; adds the project director, who emphasizes the importance they always attach to the visibility of brands, carrying out actions of marketing so that they always have the maximum return from the team project.

His motorcycle in the Junior World Championship will be a KTM 2021 AM80 identical to the one from Murcia with which he is taking part in the World Cup and that has the development frozen until 2023. &#8220;It is a great responsibility to be so close to a World Cup&#8221;, confesses David Almansa, who is ambitious and affirms that &#8220;if the results go well we could give the I jump to the World Cup in 2023 or at most in 2024 &#8220;.