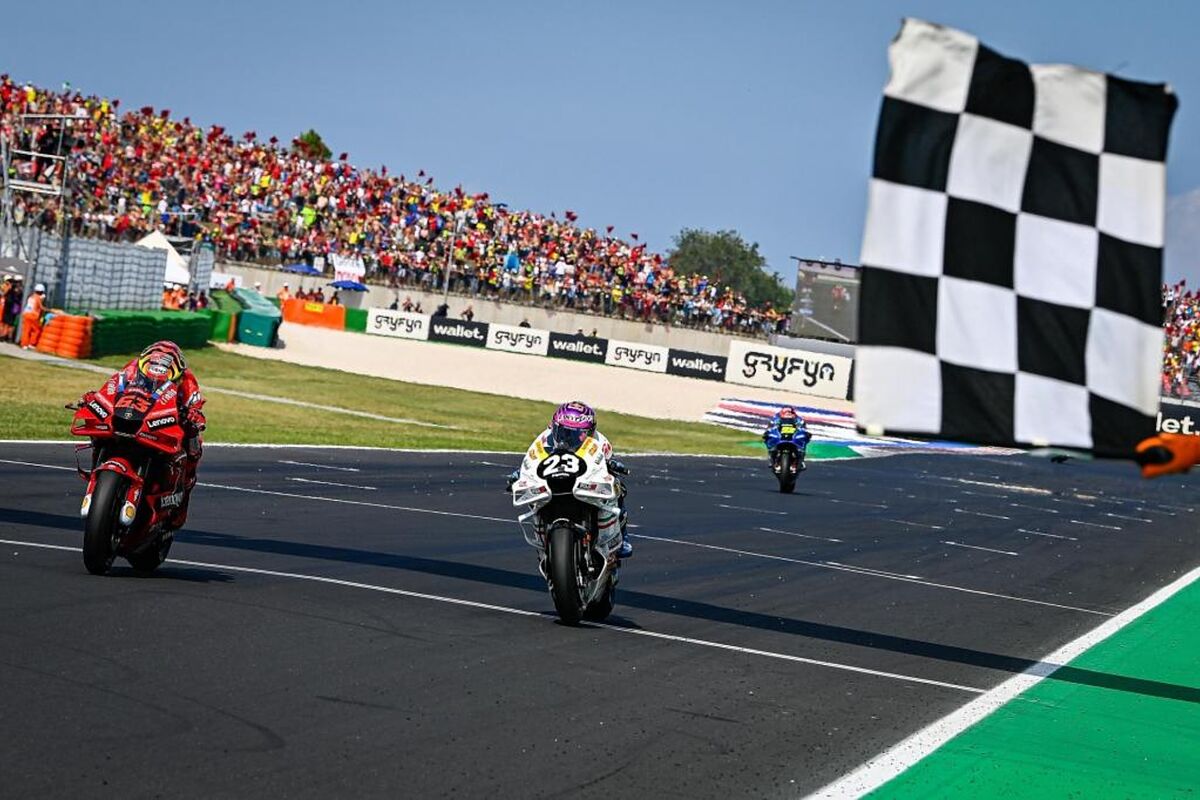 "I have remembered Iannone's thing", said one of the engineers to Claudio Domenicali, the CEO of Ducati. "Bastianini could have saved the last att

“I have remembered Iannone’s thing“, said one of the engineers to Claudio Domenicali, the CEO of Ducati. “Bastianini could have saved the last attempt of overtaking”, affirmed the executive, watered in the prosecco of the podium, but with cold sweats for evoking those ghosts of Argentina 2016, when Iannone tried to overtake Dovizioso as they battled for the podium and they both went down. “That can never be repeated again,” said Paolo Ciabatti, the sports director, these days.

And it is that a lump was made in everyone’s throat, especially the ‘ducatistas’ when The Beast tried to attack Pecco in the turn 4. They almost collided and Enea raised the motorcycle to avoid the impact. Despite this, the man from Rimini reacted, breaking the record for the fastest lap in Misano and once again tried to pass the factory number one by slipstreaming over the finish line. But Bagnaia won, the fourth in a row, what no one at Ducati had ever done. Neither Casey Stonerits only champion (in 2007).

Therefore, the party was complete at home. Now, Turin is only 30 points behind the lead. “I gave my life to win, but I’m not thinking about the World Cup. I’ll do it when I’m five or 10 points away,” he assured. The ’63’ defended that The Beast disturbed him. “Team orders are pointless. Bastianini could attack me,” he blurted out.

Logically, Enea thought the same. “I wanted to win, there was no strategy with Ducati. The mistake at turn 4 cost me the victory”, he stated. At Ducati, on the one hand they were happy because the one they chose as an official member of their squad for 2023 had a great performance, but on the other, I was angry with him for those attempts. They even let him know in private, as MARCA has learned.

Be that as it may, Bagnaia comes out reinforced and with Borgo Panigale dreaming big. “I see the pilot reference now to go for him. In Aragón it goes fast; In Japan, the Ducati is going strong. There are two or three good races for them. You have to look at them, today I have learned a lot from them. I know where we have to improve and it is in the braking. The last part is very good. Pecco has found the right moment, the precise driving. He hasn’t done some incredible laps at the start, but pam!, very focused, very good”, deca vials.

Instead, Alex he keeps looking at Quartararo. “Bagnaia the rival? Who do you look at the second or the first?”, He would blurt out. Espargar, only sixth, does not want drama. “I knew it was going to be difficult here. You have to be positive,” he encouraged.

That needs Fabio, fifth. “I’m frustratedWe have to wake up. I’m not worried about the distance to Bagnaia in the World Championship, but today, without having any problems, it was impossible for me to overtake, I couldn’t do more”, he launched. He only hopes that Yamaha has brought him something that works for him in the test. does to tame a Ducati and a Bagnaia unleashed.