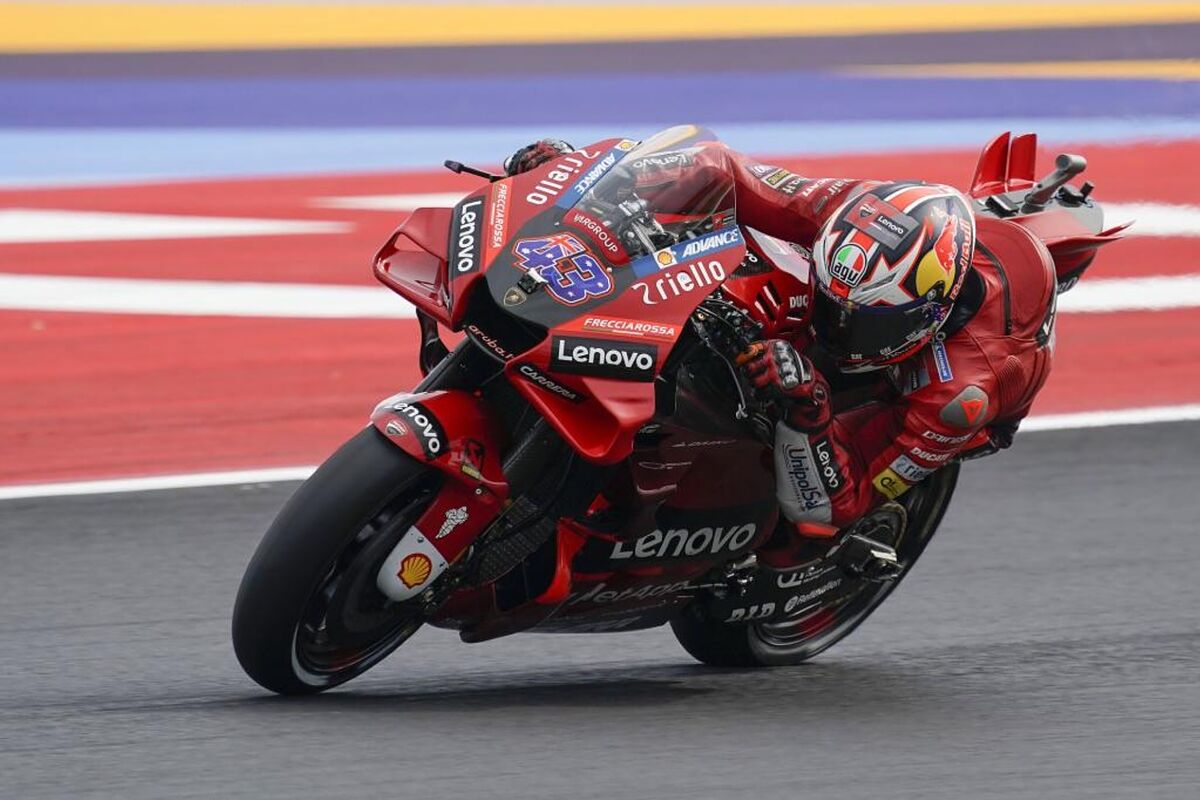 Jack Miller achieved pole position in Misano on a very delicate track due to the water. Ducati's new domain, with his 'top 4'. Bagnaia, second, b

Jack Miller achieved pole position in Misano on a very delicate track due to the water. Ducati’s new domain, with his ‘top 4’. Bagnaia, second, but will start fifth due to the penalty, although Quartararo and Aleix will start behind.

The sky did not discharge completely, but four drops fall. That’s why, in Q1, everyone rushed out to set a time.

lex mrquez started badly, with a fall in turn 3. He quickly returned to his garage to get his second bike. Marc went over to the garage to cheer on his brother.

Jorge Martn made a good opening lap that put him in command, but Bezzecchi was able to beat him later. They were the two favorites to go through wearing the Ducati and their rivals pointed out that they would be their teammates from the Marini brand, Di Giannantonio or the tester Pirro. There are up to nine Desmosedici in Misano.

Valentino Rossi is not here, as he competes in the GT World Challenge at Hockenheim, but his brother Luca was able to displace Martin before the rain came down. Marini surpassed him for 11 thousandths. The others couldn’t even make a full attempt. Passed: Bezzecchi and Marini, to the happiness of the VR46. Jorge starting 13, Di Giannantonio 14, Brad Binder 15, Lex Márquez 16, Pirro 17, Dovizioso 18, Pol Espargar 19, Bradl 20, Darryn Binder 21, Nakagami 22, Watanabe 23, Gardner 24 and Ral Fernández 25.

Another disaster for Honda, with his first bike in 16th place. Only the presence of Marc generates illusion.

The asphalt was already wet for Q2, with 24 degrees in the environment and 27 on the track. There was some wind and a lot of doubts about which tire to ride.

Everyone came out with wet tires except Oliveira. The rest tried to see how the track was and make a time. Miller, Morbidelli, Bezzecchi and Bastianini went back to the box to put on the smooth ones. The contenders for the title were conservative.

Oliveira, with the ‘slicks’, made it clear and put himself first. They already warned everyone who was left to return to the garage to change their wheels.

Bezzecchi beat the Portuguese, but many were going to lower those records. The intermittent rain flags continued, as it continued to fall, although little.

Miller pulled from previous experiences to climb, but Bastianini used his knowledge of the track and was first.

the track was drying and the Australian returned to the lead. The Ducati dominated. The condition doesn’t matter.

Viales showed Aleix the way to ascend, but espargar suffer. Miller met the forecasts and took pole position. Happiness was complete for Ducati because Bagnaia, despite the three-position penalty, will start ahead of Quartararo and Aleix.