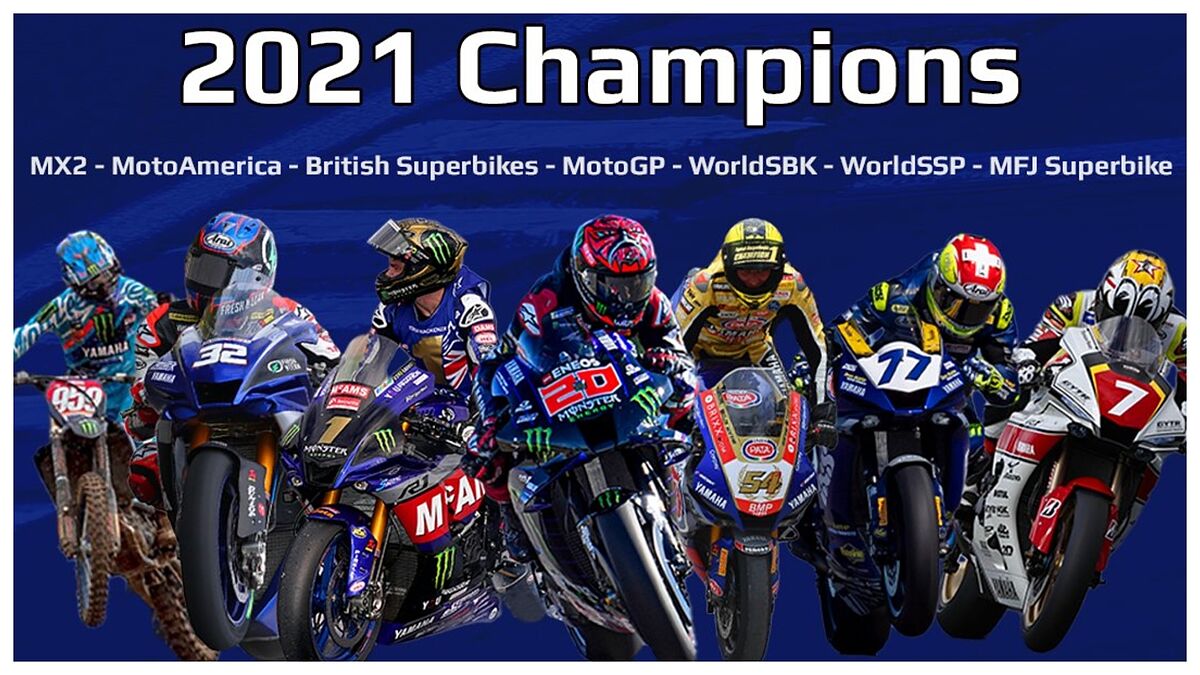 yamaha modesty celebrate its 60 years in the competition in the best possible way: 2021 will become the best season in its history in terms of spor

yamaha modesty celebrate its 60 years in the competition in the best possible way: 2021 will become the best season in its history in terms of sports results. He won the most important speed titles: MotoGP, Superbike, Supersport… surpassing even 2009, when they got those awards. So, in MotoGP they won with Valentino Rossi, in Superbike, with Ben Spies and in Supersport, with Cal Crutchlow. Also, like now, they won the British Superbike Championship, with Leon Camier, and the Japanese, with Nakasuga. But the difference was in the American AMA Superbike. So, Mladin triumphed, with Suzuki and in 2021, Yamaha has done it with Jake Gagne in the MotoAmerica heir.

Logically, it is the most important victory, given that it is the one to which they dedicate the most resources and the one they have not obtained since 2015 with Jorge Lorenzo. Fabio Quartararo knew how to achieve the regularity that he lacked in 2020 and dom, what he could, to the powerful Ducati by overcoming them in curves. It also helped that Marc Márquez was not one hundred percent physically and that Joan Mir did not have such a competitive Suzuki. The Frenchman achieved five victories and 10 podium finishes. He cemented his crown thanks to coming out ahead, with five pole positions and 14 first lines. They found in the Frenchman the leader they were looking for after the departure of Maverick Viales, the injury of Franco Morbidelli and the goodbye of Valentino Rossi. “I’ve seen my celebration in Misano more than 50 times. Everything I had gone through to get there came to my mind,” said the man from Nice on DAZN.

Toprak Razgatlioglu gave Yamaha back a wound that they had not achieved since 2009 and, what is more difficult, ended the hegemony of Jonathan Rea and his six titles in a row with Kawasaki. The Turk, course by course, had been progressing until he defeated the Northern Irishman and Redding (Ducati). His aggressive style, with braking to the limit, unhinged the British. He achieved 13 victories and up to 30 podiums out of 39 possible. At 24 years old, he will defend the crown in 2021, but the siren songs of MotoGP resound more and more. Locatelli, Nozane and Gerloff should take a step forward in the short term.

Yamaha’s dominance in Supersport is such – five titles in a row – that the organizers, Dorna and the FIM, have chosen to allow new bikes to be homologated, which could change the landscape. Meanwhile, those from Iwata monopolized the first four places and Dominique Aegerter even allowed himself to miss two races to coincide with the MotoE World Cup. The Swiss lost the winding of the electrics, but he got even with Odendaal. Seek to revalidate his scepter the coming course.

TARRAN MACKENZIE, IN THE BRITISH SUPERBIKE

Not only the Gardners became father and son champions in 2021, but also the Mackenzies. Tarran, the offspring, won the British Superbike Championship title, 25 years after his father, Niall, did it, interestingly, also with Yamaha. The Scotsman did not catch on in Moto2 in 2017 and focused on the Islands to give Yamaha a crown that he had not achieved since 2015. In 2022, repeat the contest, although he will run several appointments, as a guest, in the Superbike World Championship.

Cameron Beaubier went to Moto2 ‘tired’ of winning the old AMA Superbike, but the Japanese found a great heir in Jake Gagne. The Californian did the opposite: he did not win in the World Championships, neither Moto2 nor Superbike, and returned to the United States to have a superb 2021, with 16 victories, equaling the record of Josh Hayes and Beaubier himself. I found no rival in a championship eager for new figures.

KATSUYUKI NAKASUGA, IN THE ALL-JAPAN SUPERBIKE

In the absence of the 8 Hours of Suzuka, the honor of the factories of the country of the Rising Sun was in All-Japan, especially in its JSB1000 category. There, Yamaha was able to revalidate the crown achieved by Nozane the previous year thanks to the veteran Katsuyuki Nakasuga, who achieved his tenth title in the contest, to be the one who has achieved the most in history. All with 40 years and being, in addition, tester of those of the tuning forks for MotoGP and Superbike.

MATHIEU GINES, IN THE FRANCS SUPERBIKE

Another championship in which Yamaha extended its streak was the FSBK, the French Superbike championship. Ah, Mathieu Gines was able to celebrate his third victory in a row. In a contest with 14 races, the 33-year-old veteran competitor outlasted Valentin Debise despite taking just two wins. He triumphed for his regularity (12 podiums).

Outside of the speed circuits, Yamaha did not have such a successful campaign. In the Dakar Rally they stayed away from the fight with Honda and KTM, who won with Kevin Benavides. In MXGP, the Japanese were only fourth in the Constructors, with Jeremy Seewer, also fourth, as the best representative. But in MX2, the springboard to the highest category, Maxime Renaux took the crown by winning five Grand Prix and beating Geerts, Vialle, Guadagnini or Rubn Fernndez. In addition, the Japanese were imposed by brands. The 21-year-old Frenchman will make the leap to MXGP in 2022.