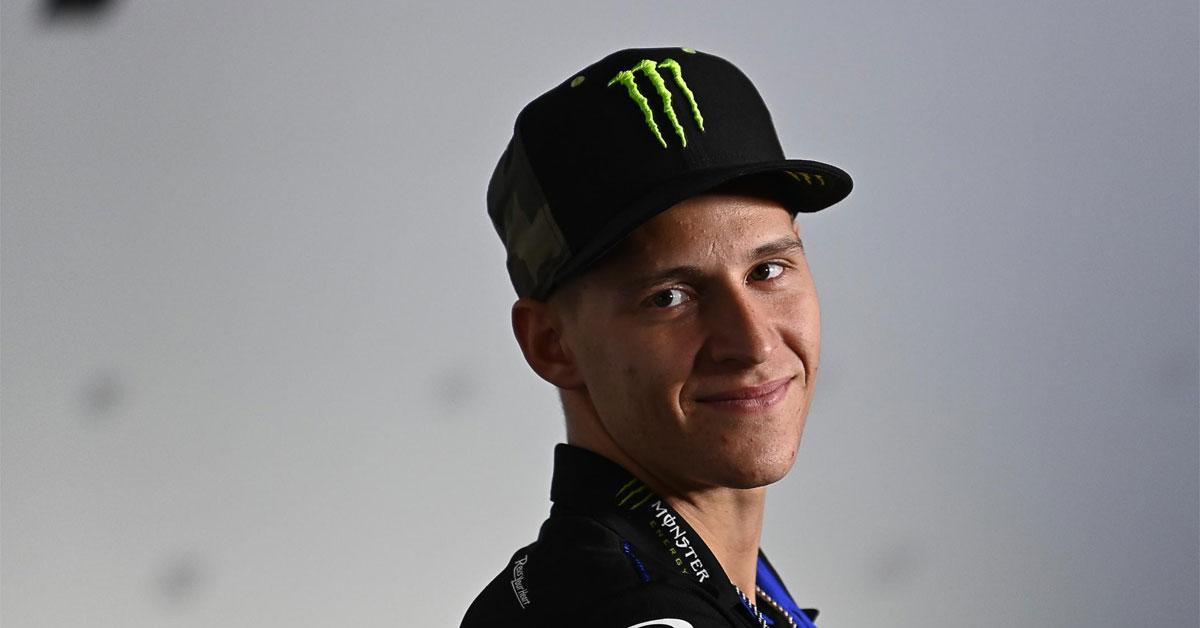 
The current champion, Fabio Quartararo, arrives as the main candidate in the queen category, against a Joan Mir who wants to regreen the laurels of 2020 and a Marc Márquez hungry to win his ninth title

The French Fabio Quartararo (Yamaha YZR M1) part as the rival to beat at the start of the 2022 MotoGP world championship due to his status as champion last season, but according to what was seen during the pre-season training everything seems to indicate that it will be difficult to renew the title, as also happened to the Spanish Joan Mir (Suzuki GSX RR) in 2020, and the big question that floats in the environment is none other than to know if Is the best Marc Márquez back?

The work carried out by Yamaha engineers during the winter does not seem to be on the same level as that carried out by other brands, in particular Honda, aprilia and Suzuki, because the Italian Ducati is always there, among the most powerful and fastest, although later missing “sentence” with their pilots.

In the tests of Taste surprised Pol Espargaró, with a Marc Márquez recovering the “tone” of the competition after many months of inactivity, and in Mandalika (Indonesia), everything changed, for the better, for both.

Pol Espargaro finished as the fastest one lap and Marc Márquez was not far but in his case it was clearly proven that his big Goal, rather than looking for a fast lap, it was about going around and around and looking for the best set-up of a “brand new” Repsol Honda RC 213 V to be able to face the whole season with the greatest guarantees of success.

and he didn’t lie Marc Márquez when he said that first he was going to recover the sensations with the motorcycle, which he did in Qatar, and that later he would seek to put it to his liking and specifications, which he did in Mandalika. At the end of all this, a very calm Márquez could be seen, eager to “want more“, which could be a premonition of what is to come with the eight-time world champion.

Those premises, together with his performance and that of his teammate Pol Espargaró, the fastest in Mandalikaplaces the Repsol riders in a clearly favorable position before the start of the season, something that had not happened for years, although they were later applied “thoroughly” to reverse the situation on the track.

But we must not forget one of the most relevant data seen in preseason training, the great existing equality among all mechanics participating in the championship.

Ducati is always at the top, as is Yamaha, perhaps the one that has evolved the least this winter, but both Repsol Honda and Suzuki have taken a clear step forward to catch up with their competition and, in the case of the Italian Aprilia, not it has been one but several steps those he has given this winter.

The Noale manufacturer was not a regular in the fight for the best race positions, except in a few exceptions and due to the favorable conditions of a certain circuit, but both in Losail and Mandalika training sessions, the Spaniards Aleix Espargaro and Maverick Vinales they have shown a performance and potential practically at the level of their competitors, which at least until the championship begins allows them to be in all the “pools”.

Aleix Espargaro is the figure always “budding” already about to explode in his performance, something he could do in this 2022, while from Maverick Viñales, after his controversial departure from Yamaha and his unexpected signing for Aprilia, he is the rider from whom “everything” is expected.

It is the same that is also expected of the two Ducati officials, the Italian Francesco ‘Pecco’ Bagnaia and the australian Jack Miller. And if in 2021 they should be benchmarks for the title won by Joan Mir in 2020, the Suzuki riders, the Balearic Islands and his partner Alex Rins, They were diluted throughout the year due to the non-existent evolution of their GSX RR prototype, something that this time the Japanese engineers do seem to have solved and that, barring any mistake, could return them to the fight for the podium as usual in 2022.

The case of KTM seems the most worrying of all of them because during the preseason neither the South African Brad Binder nor the portuguese Miguel Oliveira have been too “brilliant” and their two debutants from the satellite team, the Spanish Raul Fernandez and the australian Remy Gardnerwhich gave clear signs of still being “very green” for the queen category of the motorcycling world championship.

Its test pilot, the Spanish Daniel Pedroza, has a long and intense road ahead to try to achieve the competitiveness and level shown by their rivals in pre-season training.

Once again the manufacturer of Borgo Panigale will be the one with the most representatives on the track as its officials Bagnaia and Miller are joined by the “almost” officials George Martin and johann zarcothe Spanish and the French that militate in the Pramac team, in addition to the Italian “Armada” formed by Luca Marina and Marco Bezzecchi in the new VR46 team, owned by Valentino Rossi but managed by Spaniard Pablo Nieto, and Enea ‘The Beast’ Bastianini and Fabio di Giannantonioin the Gresini Racing team, until the end of 2021 the team in which the Aprilia brand disputed the world championship, before officially becoming a factory team.

Honda will have one more season with the Spanish Alex Marquez and the japanese Takaaki Nakagami, in the satellite team of the Italian Lucio Cecchinello; Yamaha will have the Italian veteran in its Malaysian squad Andrea Dovizioso and the South African debutante darryn binderand KTM will have the aforementioned RPaul Fernandez and Remy Gardner in the French satellite team directed by Hervé Poncharal.

Moto2: Many applicants before Gardner’s vacancy

the australian Remy Gardner (Kalex) has vacated a throne, that of the intermediate category of Moto2, which from this very weekend, with the start of the championship at the Qatar Grand Prix to be held at the Losail circuit, will have multiple applicants.

Some classic names, such as those of the British Sam Lowes (Kalex), the German Marcel Schrotter (Kalex) and Italian Roman Fenati (Boscoscuro), who can be considered eternal contenders for the category, along with a string of Spanish representatives, all of them of the highest level and one could say headed by Aron Canetbut also with Jorge Navarro (Kalex), Albert Arenas (Kalex), Augusto Fernandez (Kalex), Jeremy Alcove (Kalex), Mark Ramirez (Kalex), Fermin Aldeguer (Boscoscuro) or the reigning Moto3 world championPedro Acosta (Kalex), who was exhibited in the preseason and reaches the category with ‘hungry’ for more titles.

In this relationship are practically all the candidates for the title of Gardner, perhaps with Sam Lowes at the head for his experience and for staying with the Belgian team Marc VDS de Marc van der Strattenin which this season he will have the Italian as his teammate Tony Arbolino and that carries behind him a wide and competitive sporting background.

At his side, other teams with “Solera” like that of the two-time 250 cc world champion, the Spanish Pons site, that completely renews its squad with the incorporation of Jorge Navarro and Aron Canet, which should keep him Grand Prix after Grand Prix among the best in the category.

The new sponsor GasGas with the veteran team of Jorge Martinez ‘Aspar’ and Albert ArenasMoto3 world champion in 2020 and already with a year of experience in the intermediate class, should be another of the usual contenders in the fight for the podium, as well as the KTM team led by the Finn here garlicworld champion squad in 2021 with Remy Gardner and runner-up with Raul Fernandezwhich is completely renewed with the incorporation of a “veteran” as Augusto Fernandez and a “newcomer” of the quality of Peter Acosta.

The Moto3 world champion claims to come to the category to learn, but last year he came with the same intentions to the world championship and his category of “entry” in the World Cup competition and ended up taking the title of champion.

A step forward should be taken by some of the “illustrious names” of the intermediate category, as is the case of the Czech Filip Salac, in the Gresini team, the Japanese Ai Ogura from Idemitsu Honda, Lorenzo dalla Porta at Italtrans, and representatives of Valentino Rossi’s first team, VR46, with Celestino Vietti and Niccolo Antonelli.Although the nine-time Italian champion, retired last year from active competition, will have a second Moto2 squad from which to send out the riders of his Rancho VR46, and which this season will have the services of the Japanese Keminth Kubothat if he passed through the ranch, and of the Spanish Manuel ‘Manugass’ Gonzalezwho only went as a “guest” to the facilities near Urbino (Italy).

The Argentine Hispanic Gabriel Rodrigo, The dutch Bo Bendsneyder, the Italian Simone Corsy, the Spanish Marcos Ramirez and Jeremy Alcoba or the Americans joe roberts and Cameron Beaubierare names that have been heard at one time or another, but they still need to make a qualitative leap.

Instead, from JJorge Navarro, Arón Canet, Albert Arenas, Augusto Fernández and even Pedro Acosta much is expected of them in the season that is about to begin.

Moto3: A new fight between Spain and Italy

Everything seems to portend that the 2022 season of the Moto3 world championship will once again be a fight between the representatives of Italy and Spain for the world title in the “entry” category to the World championshipin which despite many new names there will also be some that have been “sounding” for a long time and these will be the main candidates, although there can always be a Peter Acosta by surprise that he wins at the first change, as he did last year.

Among the “classic” names and leaving Italians and Spanish aside, the British must be highlighted John McPhee, who will ride in the Husqvarna team of world champion Max Biaggi, the Japanese Ayumu Sasaki, partner of the previous one in Husqvarna, Kaito Toba (KTM), Ryūsei Yamanaka (KTM) or Tatsuki Suzuki (Honda), and to Turkish Deniz Oncuwho repeats in Aki Ajo’s squad, now together with the Spanish Adrian Fernandez.

And already, entering the wide representation of Italian and Spanish pilots, they jump “to the fore”, proper names with the experience and conditions to fight for the title like those of Dennis Foggia (Sling), Andrea Migno (Sling), alberto surra (slingshot) or Stefano Nepa (KTM), among the first, and Sergio Garcia (gasgas), Jaume Masia (KTM), or Izan Guevara (Gas Gas) among the latter, although they will not be the only ones.

In the largest of the representations, by country of the category, the return of a female to the championship also stands out, the Murcian Ana Carrasco, with the help of the BOE SKX team, in which she will have as a teammate a rookie like David Munozboth on KTM trails, in addition to Xavier Artigas and Carlos Tatay with CFMoto, Daniel Holgado as Masiá’s teammate in Aki Ajo’s KTM squad, Adrian Fernandez in the second KTM team, and Ivan Ortola in the new MTA team and on the KTM handlebars.

In addition to David Munoz, Daniel Holgado or Ivan Ortola. they are completely new names in the category those of Indonesian Mario Aji and the japanese Taiyo Furusato at Honda Asia, the Brazilian Diogo Moreira in MT, the Italian Matteo Bertelle (KTM) at Avintia Racing, or the British rookies of the Visiontrack team, scott ogden and Joshua Whatley.