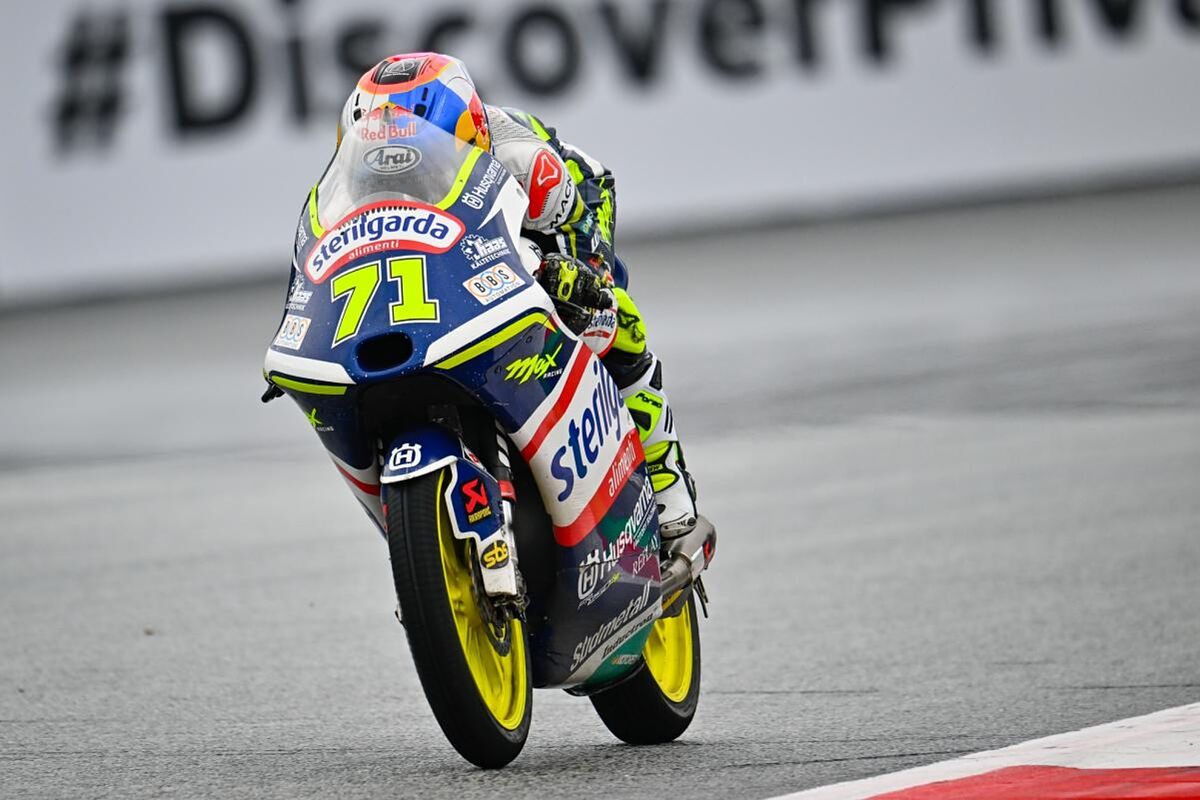 Ayumu Sasaki took victory in Moto3 in Austria. Great podium for David Muoz and those of Aspar come out stronger. Anna Carrasco She had been sancti

Ayumu Sasaki took victory in Moto3 in Austria. Great podium for David Muoz and those of Aspar come out stronger.

Anna Carrasco She had been sanctioned with starting last on the grid, something that already happened, and with going through the ‘Long Lap’ area for hindering training.

the temperature was fresher: 19 degrees in the environment and 21 on the asphalt. There were many clouds and the uncertainty of whether it would rain.

The noob Loose He had the first pole position, but at the start he was passed by nc and Sasaki. It was a clean start, without incident. Guevara and Garca won seats.

Sasaki passed the Turk, who got angry and even raised his hand in recrimination. Suzuki tried to fish in a rough river, but he did not succeed, although he did pass Holgado. Sergio was already pruning with Foggia.

Sasaki meets the first of his penalties step of the ‘Long Lap’. He was back in the group, but on the 17th. This left the Ottoman and Holgado in front. David Muoz came back in a big way to get to the top.

Muoz was first in a brutal braking in turn 1. Then, nc had to go long to avoid an impact. This made Aspar’s duo climb higher.

The tension was palpable at each approach to the curves. With 18 laps to go, Guevara was in the lead. Sasaki, after his double penalty, returned 21.

Suzuki was trying to cut Guevara’s pace to help Foggia, who was engaged in fights in the middle of the group. Sergio was waiting between hacks with Muoz and Holgado.

Riccardo Rossi was sanctioned with going through the ‘Long Lap’ for cutting the new chicane.

Carlos Tataywho was behind, trying to score, went down at turn 3. There was an incident with Migno, which was investigated and brought a penalty to go for the ‘Long Lap’ for the Italian.

The danger to everyone was Sasaki. The Japanese, at the rate of fast laps, ascended overtaking at great speed.

Sergio García Dols was warned of sanction for playing too many times off the track.

Guevara’s pull tensed the group and made several of them drop down. Foggia suffer.

Subtracting 11, Sasaki already made it to first place. Suzuki also passed Izan and Sergio, to nc. Everyone wanted to position themselves well.

Guevara, who lost positions to García Dols and nc, was also warned of a possible sanction for stepping on the green. The same thing happened with Foggia, who had lost contact and was circulating 11.

Sergio and Izan even touched in the last angle. The Balearic had to pick up the bike and go a little outside. Soon, Muoz got in and caused the Valencian to open up.

James Masi, who was running ninth and trying to get into the group, crashed at turn 3.

Two groups were assembled. In front: Sasaki, Suzuki, nc and Muoz, who did not get in the way. Behind: Sergio, Moreira, Guevara and Holgado. Further afield: McPhee, Ortol and Toba. Foggia suffered… even to score.

Muoz dived and passed the Turk on the last lap. He even did the fastest lap to earn the podium. Sasaki resisted and gave Suzuki no choice. Sergio, more leader, finishing ahead of Guevara and Foggia. Now he takes five points from Izan and 49 from the Italian.

Sasaki is ‘only’ 55 points away and is not ruled out for the World Cup. Seeing his pace and comeback, anything is possible.

Muoz even jokes. “On Sundays I have something else that I don’t have on Fridays and Saturdays. Where do I get it from? For breakfast, croissant with chocolate”, said on DAZN.

Garcia was satisfied. “We had positive things on the bike, but it was very difficult for me in sector 3. It braked well, but I was lacking in cornering. a positive runI knew how to endure with what I had. We are leaving leaders”, she affirmed.

Guevara, with a sweet and sour taste. “I felt comfortable at the beginning, but it was difficult for me to stop the bike in turn 4. Sergio has given me a touch and I’ve gone backwards. We have saved a bit of the weekend and Sergio hasn’t gone that far either”, he stated.