MotoGP | Bagnaia: “Here we begin to show our potential” 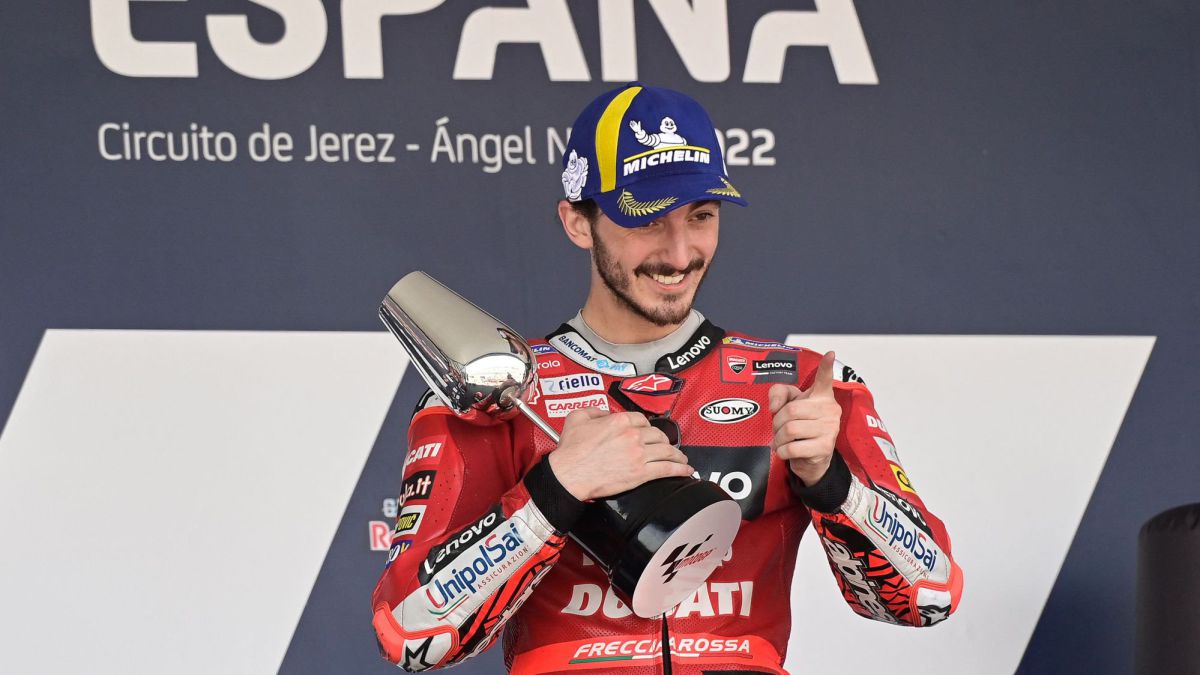 Return to the path of victory for Francesco Bagnai, with pole position, fastest lap, victory and leadership in all laps. You can't ask for more f

Return to the path of victory for Francesco Bagnai, with pole position, fastest lap, victory and leadership in all laps. You can’t ask for more from Pecco in this Spanish GP.

-Almost the perfect weekend: the fastest in FP3 and FP4, record for pole in the official and fastest lap in the race, plus the victory. How important was today’s outing?

-It was one of my best outings with this bike. I always have difficulties not having a wheelie at the start but today we squared everything off very well. I closed at turn 2 because I knew that Quartararo was on my heels, and I was also afraid of the exit of turn 12 because I knew that last year he was very fast there, so I tried to close the door. I knew that Fabio was the man to beat today but in terms of pace I was clear that the problem was going to be the pressure of the front tire due to the temperatures, and that is why he needed to be in front. Today it was difficult to go faster because the bike was slipping from behind a lot and the front end was closing many times. In any case, everything has turned out perfect.

-We had been waiting for a performance like this for a while with the GP22, but it has not been a good start to the season for you. How important are these good feelings with the bike? Do you think you are going to stay here at the front and fighting in every race?

-The truth is that I was more optimistic during the winter tests, but when we got to the first race we hit reality, which was quite different, and I began to have quite a few difficulties. I think we did something positive, which was not trying to adapt this bike to me but leaving it the same. I saw that I needed a different riding style, and now I can go faster in the corners. I needed a different style and I have managed to adapt and get back to my best form, like I was last year, and I would like to continue along the same lines from now on, without losing too many points. Because after six races, being 33 points behind is quite a lot.

-It seemed that the shoulder did not give him problems today…

-I was more worried about the race, because this morning in the warm up I didn’t take painkillers and it was hard for me. But then at Clinica Mobile they always have something good to offer you, and it has helped me. In the last part of the race, it did cost me a little more because all the hard braking is to the right, except in the last corner, and in turn 6 it was very difficult to stop the bike because it seemed as if someone was pressing me in the shoulder, and it was very painful. After the race I feel more pain, but it is good that it is now.

-I hope so. I still have to recover, but I hope to be able to fight against these two drivers who are ahead in the championship right now.

-It was his first victory of the season. Compared to the other four, especially the first, where do you put this one?

-My first victory was my first victory, so at the level of emotions it was incredible, with that fight with Marc and in Aragón, which is a very difficult circuit for me. And getting it was amazing. But today’s tastes very good to me too, because it has come after a difficult period, we have never stopped working, since the beginning of the season, and finally after so much hard work at home and here we begin to show the potential that we already knew was there on this bike, but that we had a hard time proving. So today is a fantastic day and the win was fantastic.

-How has GP22 improved compared to GP21 and how has your driving style had to change?

-Already last year I was worth more than cornering, and this year the bike is a little different. I was having a bit of a hard time keeping the same driving style as last year and over the last two weekends I have been working on getting into the corner quicker and understanding how to do it the right way. And it’s not easy to change your riding style overnight because I had worked so hard the year before with Ducati to have great braking and corner entry and now it’s a bit different. We are talking about small details, thousandths, which does not make much difference, although now it can enter the corner faster.

-What has been more difficult for you to manage, the pain in your shoulder or having Fabio behind you?

-Fabio. Definitely. Because I didn’t have a distance of two or three seconds, it was five, six, seven tenths, and it’s very easy to make mistakes in this type of situation. So today I focused on driving in the perfect way. When you’re in a situation like this you don’t have time to think about your shoulder hurting or a problem you have. So I have concentrated on being the best on the track, on being the fastest. The main thing was to try to go as fast as possible, because if I had gone wide in a corner Fabio was there, so it was very important to be consistent.

Cheste will expand its capacity for the end of the MotoGP campaign
SBK | Bautista: “It’s wrong to compare Superbike with MotoGP”
GP Netherlands MotoGP 2022: Dixon leaves Arenas without pole in Moto2
MOTOGP 639

Loading...
Newer Post
El Tigre Golf Club hosts the Dev Series Final for the second consecutive year
Older Post
Controversy at the door: Conor McGregor was challenged by a possible rival for his return to the UFC